Monte Holsinger (2007)
I was but a stripling, eighteen years of age when I first met Vivian. I still vividly recall that meeting way back in 1963. He and his beautiful wife, Charmaine, (who died last year) were a truly striking looking couple, who no doubt had a mesmerizing effect on a callow youth, such as I.

I met him again about a year later when I began my planting career as one of his Assistant Managers on Mahadowa Estate, where he was the manager. Mahadowa Estate is in Madulsima, one of the most beautiful planting districts situated in the eastern escarpments of the central massif. It was also the best run property in the district and in the Scottish Tea and Lands Company of Ceylon Ltd., to which it belonged. 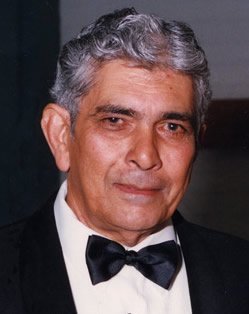 Working under Vivian was no walk in the park. Being a hands-on planter who led by example, he drove his assistants to the limit and ensured that the company got their pound of flesh. As a planter, Vivian had few peers. His pragmatic approach to management and a rare commonsense proved much more effective than those of others steeped in theory or half-baked premises. His estate was invariably the highest profit maker in the company and Mahadowa was verily the jewel in the crown of Scottish Tea and Lands. I consider myself extremely fortunate to have learned my trade under him, as Assistant Superintendent and Senior Asst. Superintendent on Mahadowa, and Sarnia Estate in Hali Ela. When it came to pruning and plucking, those prime operations on a tea plantation, he set the standards himself by demonstration. He could wield a pruning knife with the dexterity of an ace pruner and show the pruning gang exactly how he wanted a particular field done; likewise, he would often stop by in a plucking field and pluck a few bushes himself whilst expounding to us on the finer points of “full leaf” plucking. This approach to work won him the respect and admiration of his assistants and his labour force.

Of course, it was not all work and no play for his assistants. His unarticulated motto could well have been ‘work hard and play hard’. If you proved your mettle, his brusque attitude would thaw to a definitely warmer and cordial one, and if you were invited for breakfast you were on the right track. Dinner meant that you were accepted.

Vivian hailed from a solid conservative and distinguished family of Burghers. The Blazé’s had already etched a trail of enviable achievements and were prominent members of the community and society in general. His father Dr.Louis Blazé was a doctor of renown who held the post of Director of Medical Services of Ceylon. His uncle John was Professor of Medicine at the Colombo Medical College. His grand uncle, L E Blazé was the Founder of Kingswood College and a historian of repute who had authored many publications.

Lucien, his only sibling followed in the footsteps of his father and illustrious forebears and distinguished himself as an eminent physician in Australia. Vivian who was obviously favoured by the gods with an abundance of physical attributes and talents was enticed to a career in the thriving plantation industry, which had a glamour all of its own. In those days, the industry which was the special preserve of the British took in Ceylonese only with grudging acquiescence. In keeping with their sporting traditions, they went for the youth, of the best private schools, who excelled in the field of sports. Vivian was ideal grist for their mill as one of the best athletes of his time. At the age of 17, he was a Public Schools champion and later, the All Ceylon 440 yards Hurdles Champion. He also had a Diploma in Agriculture under his belt to boot. As a gangling rawboned youth, 6’2” tall and all of 150 lbs, he represented his country at the Empire Games in Auckland in 1950 and brought back bronze in the 400 Metre hurdles. Adept at any sport that took his fancy, he was a superb swimmer and Water Polo player, and a fine Rugby player, who captained the fabled Merrie Men of Uva in the mid-sixties. By now the gangling youth had grown into formidable maturity and was the pack leader of his team. His contemporaries in the sport were the Pilapitiyas, Graeme Hamer, Graeme Wright, Bill Moneypenny, The three “B”s, Bretherton, Bousefield and Bean, Ken de Joedt and Trevor Anghie to name a few. There were also many other Europeans who had played at Junior International and with all this talent, Ceylon took the All India Championship every time.

Vivian was an exceptional marksman too and had that special hand and eye coordination which spelt doom for the snipe and garganey that came within range of his trusty 12 Bore, as I myself have witnessed on many an occasion. True, everything came easy, and he could acquit himself admirably be it tennis, snooker, bridge, poker or that unique gentleman’s game so popular in the upcountry planters’ clubs in those twilight years of the British Era, namely, Cardinal Puff! He had a ready wit and a wicked sense of humour and could out-squelch most. Once, when I had forgotten to attend to a task he had assigned, he said, referring to my preposterously lengthy name, your name should be S.L.E.E.P. Holsinger and not S.L.E.E.M.! Naturally, I failed to see the humour in this at the time.

Reflecting upon his planting career of about 22 years in Sri Lanka, Vivian became a manager in The Scottish Tea and Lands Co., a scant 4 years or so since he commenced his training and finally rose to the position of General Manager. Indubitably he had those qualities which made him a natural leader. He always said, “One should never demand respect, but command it. He seldom had to use the authority vested in him with his subordinates or in other honorary capacities, such as Chairman of the District Planters Association or Planters Society. He had that innate ability to speedily assess a situation and adopt a strategy to resolve it. As a top-notch negotiator, with a reputation for fair-minded firmness, his involvement in a dispute had a becalming effect on the others.

Although endowed with the good looks that would have been the envy of many a matinee idol, the sobriquet of Ladies Man could never be applied to him. He was a devoted husband and a doting father as his children will fondly remember and I believe he gave so much of his life to see that they lacked nothing. In the early 70’s, the threat of Land Reform which had hung in the air like the proverbial Sword of Damocles became a reality. More changes were being contemplated by the powers that were, and in this milieu of uncertainty and Socialist upheaval, Vivian decided to quit and emigrate to Australia. This move was prompted as much by his concern for the future of his young family as his fear for the future of the tea industry. In hindsight, the wisdom of this move might come under scrutiny, but the reality is that his children, Vicki, Hans, Graeme and Paula, benefited enormously. They have integrated easily, are doing extremely well and really are, “Dinkum Aussies”.

Vivian, who had been together with Charmaine for 52 years, was absolutely shattered by her death. As an equal partner in the marriage, she left a void that was difficult to fill. Her departure no doubt had a seriously debilitating effect on him and scarcely a year later, he succumbed to a disease which he bore with heroic stoicism and quite obviously, with a great yearning to be with her.

I met Vivian and Charmaine several times in Sri Lanka when they came back on holiday and we kept in touch with frequent letters. On every visit, he would reunite with his friends among whom, were his former assistant managers. In point of fact, it must be ruefully admitted that most of them, namely, Kumar Boralessa, Ranjan de Alwis, Harish Weerasekera, Nelson Wijewardene, Panditha Jayatunge, Jivaka Atapattu, the late Hilary Marcelline and I met each other only when the Blazé’s were around!

There is so much more to Vivian than I know of, or presume to know of, but there is one thing that I am absolutely certain of. Anyone who knew Vivian will mourn his loss and remember the warmth of a genuine friend, a genuine friendship. Vivian was, after all, a human being and doubtless evinced some of the flaws that characterize humankind. To my mind that probably made him all the more likeable and more lovable. His children are disconsolate.

One of his daughters said I miss my beautiful father so much! What a grand, loving, fitting epitaph! Something to aspire to no doubt.

I suppose time has inexorably caught up with me as it must with anyone, and I am at that juncture of life where reminiscences play an increasing part in the daily routine. Should it be said that this tribute to a remarkable man bears more than passing adulation or hero worship, I would readily, and quite unashamedly reply, so what?