Visit by Baron Timothy Renton to Middleton Estate in 1988 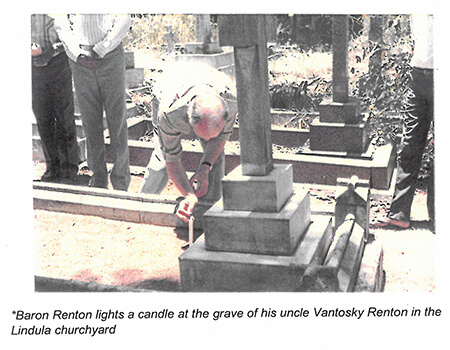 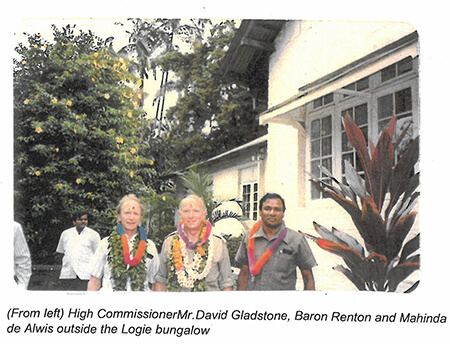 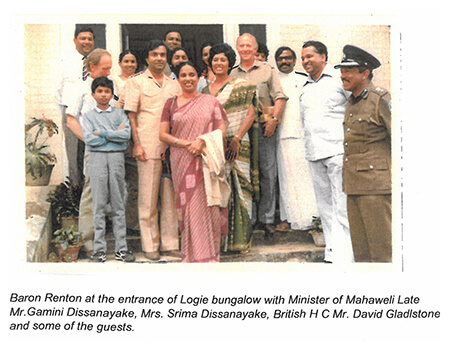 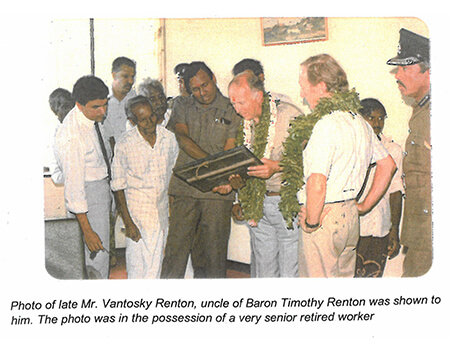 (Renton was the Minister of State in Margret Thatcher’s Government and Middleton Estate was previously a division of Logie Estate, Talawakelle)

Sometime in March 1988 when I was the Superintendent of Logie Estate, Talawakelle, the British High Commission in Colombo communicated with me via the State Plantations Corporation to the intended visit of Timothy Renton then Minister of State in the Thatcher Cabinet. Mr. Renton was to arrive in Sri Lanka to visit the Victoria Dam. The British Government was the principal source of foreign aid towards the construction of the Victoria Dam which was declared open in May 1985 by British Prime Minister of the day Margaret Thatcher.

The High Commissioner Mr. David Gladstone told me that Mr. Renton’s grand uncle J. Vantosky Renton who once owned Middleton Estate, Talawakelle, died in Ceylon in 1915 and was buried in a grave in Lindula and sought my assistance in locating it to enable Mr. Renton to visit and pay his respects to his long-departed forebear. Middleton Estate, which was operated previously as a separate estate, was amalgamated as part of Logie Estate when estates were nationalised under stage two in 1975.

When inquiries were made from the workers, a senior retired worker informed me that Vantosky Renton lived in Middleton bungalow and after his passing away was buried in the Lindula church graveyard. It was with some difficulty that I located the grave as the headstone was covered with overgrown weeds and the lettering almost obliterated. It was given a thorough clean up and the area tidied for the distinguished visitor who drove up to the estate together with the High Commissioner Mr. Gladstone in a cavalcade of vehicles. Mr. Renton first visited the grave and paid his respects to his long-departed grand uncle, lit a few candles and then proceeded to the bungalow.

The Minister in Charge of the Mahaweli Mr. Gamini Dissanayake and his wife Srima also joined the party having flown from Colombo in a helicopter. The visit created a lot of local interest not the least because of the presence of the VIPs who later joined us for a sumptuous lunch catered by the Hill Club, Nuwara Eliya, in the estate bungalow. It was a near tearful and poignant occasion for Timothy Renton who had apparently only heard of but had not known that the estate was jointly owned for many years by his grandfather James H. Renton and grand uncle Vantosky Renton.

Middleton Estate Talawakelle, and Talankande Estate, Dimbula were originally planted in coffee by R.B. Downall a pioneer coffee planter and Member of the Legislative Council. Mr. Downall was a wealthy man who once owned Barnes Hall, the palatial house in Mount Lavinia built by Governor Sir Edward Barnes, and now the Mount Lavinia Hotel. The brothers James Henry Renton, born 4 September 1852, and Alexander Vantosky Renton, born 10 May 1854 arrived in Ceylon from Aberdeen in Scotland in 1875 and within a few years bought Middleton and Talankande Estates from Downall who also owned Dambatenne Estate in Haputale, the latter to become famous as Sir Thomas Lipton’s main tea estate. Mr. Downall died on 5 December 1888 at the age of 45. The Renton’s having bought the two coffee estates had them replanted with tea. While Vantosky Renton managed the estates, his brother James was based in Colombo and was one of the early tea buyers in the industry. Vantosky’s life on a tea plantation may have been rather lonely and devoid of much social contact. Such were the rigours of a pioneering tea planter’s life in those days.

In 1883 at the age of 29 he wrote an anthology of poems published by the Ceylon Observer Press called “Coffee blossoms and other poems” a work which reflected his sensitivity to the environment around him. The August 1889 Edition of the Ceylon Literary Register carried a detailed description of his climb up the rock of Sigiriya, then a remarkable feat, the area being overgrown with forest and excavation work on the ancient site still to commence.

In 1900 the Planters Association appointed James Renton as Tea Commissioner for Ceylon Tea in Europe, a market yet to be fully acquainted with Ceylon Tea. Renton was given a sum of £ 5000 to be spent on raising the profile of Ceylon Tea throughout Europe. He was the pioneer Ceylon Tea Propagandist in Europe and possibly the first such to be appointed and he acquitted himself very creditably in this role. As a result of his endeavours tea exports from Ceylon to Europe rose by about 300% over a period of six years from 1899 to 1906 and it laid the foundation for a new age of prosperity not only for Ceylon Tea but for Ceylon as a country whose economy was dominated by the tea industry.

James had also in the meantime made some judicious investments in rubber companies in Malaya and was able to oversee his estates in Ceylon from his residences in Bedford and Knightsbridge in England having decided to return to England with his family in 1902, mainly to educate their children. Vantosky the younger of the two brothers who continued to live in Ceylon died in Lindula in 1915 at the age of 61, of which 40 years were spent in the island and was buried in the Lindula churchyard. He was a bachelor at the time of his death. Five years later in 1920 James died, having been run over by a horse drawn taxi in London, at the age of 68. The estates in Ceylon passed on to new owners a few years later.

James Renton married Louise Sophia Brander who travelled from Germany to marry him at the Holy Trinity Church, Nuwara Eliya on 25 November 1889. They had four sons Gordon, Noel, J.W.H., and Ronnie who were all born in Ceylon but educated in England. All four sons enrolled in the British Army for active service in World War 1. Noel studied at Harrow Public School, joined the Army and was on active service in World War 1. He died in action on 30 July 1915. The youngest J.W.H. (possibly James Jr) was also killed in action a year later. The tragic loss of two sons in consecutive years would have had a devastating effect on James and Louise. Of the other two sons Frederick was twice wounded in action in France. Ronnie who was lieutenant in the 11th Hussars saw little action at the start, but his regiment was involved in driving the Germans back towards the Rhine towards the end of the war. Ronnie lost his first wife at childbirth and remarried five years later and was the father of two sons Jeremy and Timothy. Both sons were Etonians, Timothy showing early signs of leadership as Head Boy and Head Prefect at Eton, the leading public school in England. Both completed their tertiary education at Oxford University like their lawyer father Ronnie. Timothy who was born on 28 May 1932 joined the British Conservative Party and served as a Minister of State in the Margaret Thatcher and John Major Cabinets. In 1997 he was made a life peer as Baron Renton of Mount Harry. His daughter “Polly” Renton, a celebrated film maker and renowned journalist died tragically at the age of 40 years with her four-year-old daughter Sita in a road accident in Kenya in June 2010. Polly and her brother Alex the award-winning journalist of The Guardian were doughty protagonists of the war against want and poverty.

The story of the Rentons’ in Ceylon gives credence to the pithy saying that “the whirligigs of time brings in his own revenges”. James Renton arrived in Ceylon in the early 1880s as a colonist seeking to make his fortune; by a strange quirk of fate, he was followed over a hundred years later in 1987 by his grandson Timothy in a completely different role bringing development aid to the former colony!

Although years of secluded history have somewhat clouded the story of the Rentons and their pioneering work in Ceylon, there is little doubt that a tea garden in distant Sri Lanka held a special place in the heart of Baron Renton of Mount Harry.

Baron Timothy Renton passed away on the 25th of August 2020.