TEA STORY FROM THE LAND OF FIRE! 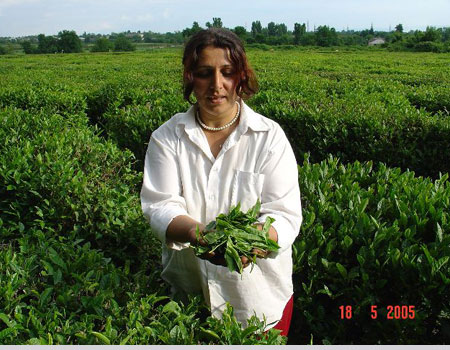 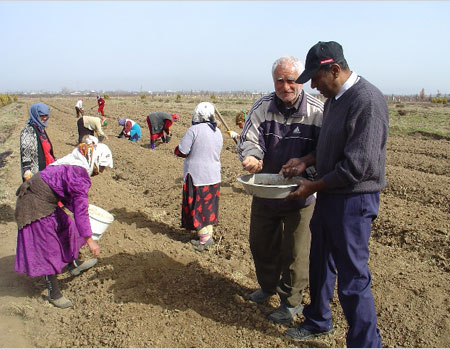 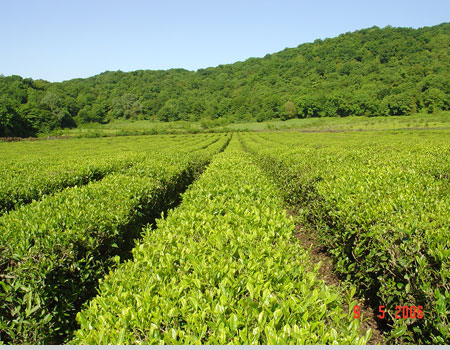 Living here in Azerbaijan has been an incredible experience so far. I have met countless people who have never ever seen a ‘dark skinned’ person, let alone a “Sri Lankan”. I have had conversations with people in sign language, with little bits of Azeri, and thru an interpreter about all kind of topics, ranging from ‘Tea’, ‘Tsunami’ to ‘Tiger Rebels’!

Being where it is, Azerbaijan is in the middle of a wide array of historical and cultural affairs. Those influences have dug their way into all facets of life. Most of my day-to-day interrelations in my working environment are in Azerbaijani, translated by the Project Officer. It is rare for a conversation to pass without a smattering of the Russian, Talish and Avari languages. Throw in the vast deposits of oil in the Caspian, and this becomes a truly dynamic place.

I have been working in Azerbaijan for more than 36 months for the German Technical Corporation as a Consultant in their Private Sector (TEA) Development Programme. I lived the first 18 months in a small town in the northwest part of the country. This Region called Zagatala is well known for its cool climes, fresh air, abundance of hazelnuts, walnuts and the enormous mountains that seem to hover over the city. A snow-covered peak that marks the border with Dagestan is visible from my front balcony on clear mornings and if you look to the east and south, you would see the rolling plains that fade off into the Georgian grape land. Very few Azerbaijanis know of the very attractive and lucrative tea plantation settlement, along the forest on the way to the border town of Balk from Zagatala.

Currently, I work and live in the Southern City of Lankoran, where most of the tea was grown during the Soviet era. The Lankoran region possesses rich flora and fauna. Talish woods are known around the world for their relict and endemic trees. Iron tree, Azat, Silky Acacia, Oak, Cork tree, Velvet Birch and Nil trees are identified in the woods. This region is an important agricultural zone. Lankoran is famed with Tea, Japanese persimmon, feijoa, lemon and tangerine as well as the winter and spring vegetables. However, the main product is ‘tea’.

The different support activities carried out by me targeting the small tea farmers, factory directors & personnel include: 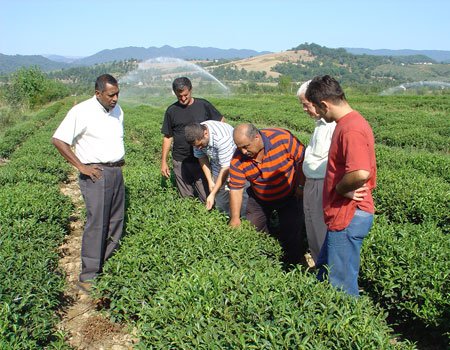 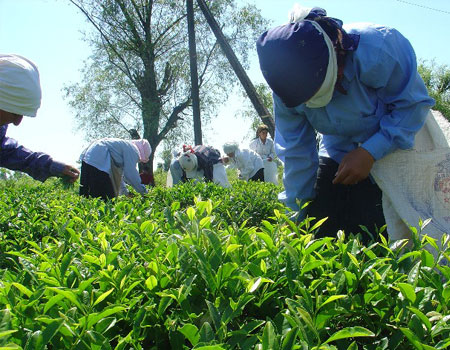 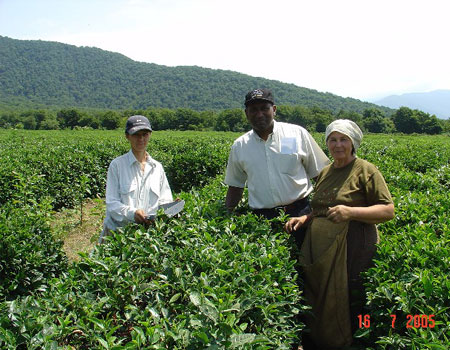 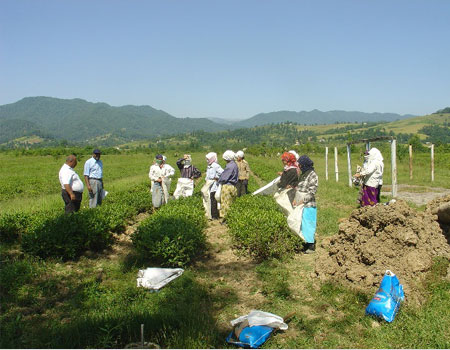 My biggest challenge yet is to educate all the tea farmers on the ‘art of harvesting’ of a good standard of leaf! Whilst improvements are made with some of them, the majority are not focusing on quality standards. This is only causing more damage to the tea bushes and the situation can worsen if not arrested now. The low price paid for ‘green leaf’ by the factory owners is also a reason for the poor quality harvest. The other being total lack of knowledge and supervision.

With Azerbaijan gaining independence in 1992 all tea lands owned by the government were divided amongst the peasant farmers. These in most instances were done in an unusual manner only to be understood by the Azerbaijanis themselves! The ‘land’ was distributed to some influential person in the city and the ‘tea bushes and other crops’ were allocated to the farmer. Most farmers/workers being women makes it a real challenge to rehabilitate the tea lands. Yet, I have found them to be willing workers and quick learners! With the introduction of pruning machinery etc. their tasks are done more easily and efficiently. It is no wonder that I have made many friends here!

Azerbaijan is usually populated by 8 million people, but about 2 million of them now work in Russia, Turkey and other Caucasus Countries. Of the remaining 6 million, 3 million are estimated to live in the capital city, Baku.

Being land-locked on most of its borders and having the Caspian Sea, which itself is land-locked, as the remaining boundary, Azerbaijan is greatly dependant on good relations with neighbouring states for her import/export trade.

A major import is tea due to the high consumption, estimated at 16,000 – 18,000 tons per annum. Over the years, since the formation of an Independent State, Azerbaijan has imported 32- 26 million US$ worth of tea per annum, much of it of Sri Lankan origin. Traveling around, one cannot miss the ever popular male-dominated ‘chayhanas’- tea houses- in every city, town and village. Drinking tea is no doubt a great tradition and past time in Azerbaijan.

During the time of the USSR, the tea supplied to Azerbaijan was mostly BOP type from the High grown areas of Sri Lanka (i.e. grown 1500 meters above mean sea level). In the initial years of the formation of the Commonwealth Independent States however, there was dependence on Turkey to obtain tea supplies. This dependence and influence brought about a qualitative change in the type of tea consumed in Azerbaijan, from High grown BOP to Low grown (< 500 meters above mean sea level) semi-leaf and Pekoe type teas which have quite different liquoring characteristics. Furthermore, the introduction of flavours (“aromatization”) into the tea became accepted.

There is some production of tea in Azerbaijan, mainly carried on from Soviet times. Although Azerbaijan’s climate is primarily temperate, there are areas considered sub-tropical. Tea has been cultivated in these selected areas from as far back as the late 19th century. However, the more commercial cultivations were established in 1932 – 33. The first processing factory was built in Lankoran in 1937.

In 2006 approximately 270 tons of Black tea was produced in Azerbaijan, mainly in the Lankoran and Astara districts in the country’s south-east. In 2007, 400 tons of Black tea was expected to have been produced. The country has three large tea packing plants (i.e.) Azersun and Baku Tea Weighing in Baku and Beta-Lankoran in Lankoran. The latter factories are joint ventures with Turkish interests. The products of these plants dominate the Azeri tea market. These plants import, blend, flavour and packet teas for distribution throughout Azerbaijan. The joint ventures are also now involved in the processing of tea in Azerbaijan. Most of this tea is blended with imported tea. A small quantity is sold as a pure Azeri product.

There is a tendency to flavour tea prior to packing, leaving room for suspicion among the public that poor quality tea is being imported and disguised by flavouring. This may not be the case with all imports, however, as some of the teas seen in supermarkets and bazaars, where promotion of Tea takes place, were grades which are fetching around 4 to 9 US$.

“OLMAZ”! This word forms a cornerstone in Azerbaijan, a country rooted in tradition! It clearly defines what is forbidden or not allowed! Hearing this word uttered as a sharp exclamation will immediately let you know that you are walking on shaky cultural grounds! Should I say that I have not stepped out of line? Even though I have had to be quite firm with some Farmers and Factory Directors to change to modern management methods! So it has been “OLMAZ” on a lot of the past ineffective practices carried out in the fields and factories.

I would feel sad to leave this rugged yet beautiful country. Many challenges and difficult situations were faced and overcome. I am pleased with the results that were achieved over the past four years. A good plantation manager can do almost any type of management work. However, a ‘Ceylon Planter’ is at his best in the environment he loves most as I make my way home.

Editor’s note - Vige Johnpillai commenced his planting career in 1972 with the Scottish & Tea Lands company and his first posting was on Haputale Estate. Nationalisation of the plantations followed shortly and Vige was drafted into the Sri Lanka State Plantation Corporation (SLSPC). He was appointed Superintendent in 1984 and took charge of Edinburgh Estate in Nanu Oya. Following the re-privatisation of the plantations in 1990, Vige joined Maskeliya Plantations and then Agarapatna Plantations, where he remained till his departure to Azerbaijan in 2005.