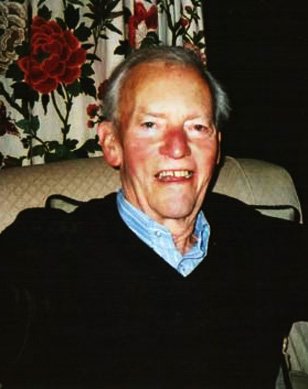 For many years I used to think how privileged I was to have four friends upon whom, if the need ever arose, I could rely utterly upon. Four men who would stand by me. Four men, I could put my bottom dollar on, so to speak.

That was until 1998 when the first, a Jesuit priest, died on Christmas Day.

A year later the second, soldier and businessman, left us and the Christmas Day he remembered was in 1944 when he was marched into a German POW camp with no food.

The third died at about this time last year, after nearly forty years as a GP in Bicester.

Now the fourth, dear Richard, has left us and it is an honour to be asked by Eileen and Michael to say something about him as we come together to pray for him and to celebrate his remarkable life. What was it about Richard and those others (all of whom incidentally had met in our house in Tackley Place)that gave me such reassurance?

It had something to do, I think, with their being ten years or so older than I was. Which meant their memories of life in this country before the Second World War were more vivid than mine and the influences of that period upon them more marked. They grew up as young men in an England that was still a great power, that still controlled a huge empire. And they were called upon to defend it in a war that dominated their young lives and much of the 20th Century. It was in the shadow of such men that my generation grew up.

Richard, of course, had direct experience of the British Empire. And perhaps we see in him the best influences of that imperial age and the standards it set – things not often referred to in the present day when empire is not a popular concept.

The first obvious influence is the self-reliance and independence that Richard learned early. He was born in the then Ceylon in 1922 and when still only eight was put on a ship, unaccompanied, and sent on a five-week journey to his prep school in England. How many boys could do that now? How many would be allowed to? And how many would get themselves into Public School more or less interviewing headmasters, as Richard did, before settling on Wellington School in Somerset?

Very early he learned to stand on his own feet. But greater testing was to come because shortly after he returned to Ceylon to learn about tea-planting, war broke out, the Japanese swept through South-East Asia and soon were at the gates of India. Nothing could stop them, and it was not till 1944 that the British and Indian armies learned enough and had assembled the equipment to turn the tide. By then Richard was an officer in the Royal Signals Regiment and was in time to be present at the turning point. Kohima was one of the most bitterly contested battles of the war, fought out for six weeks from April to June 1944. British and Indian troops slogged it out with the Japanese; positions often. changed hands several times a day and for weeks all that separated the forces at one point was what became a very famous tennis court. It was a ghastly business and Richard was twenty-one.

Like most men who had seen action, he rarely spoke of his experiences and if he did it was with reticence. But I remember a hot summer's day in about 1997. He and I were repairing our dividing wall in the garden and whilst we were having a breather on a bench, Richard without any prompting began to tell me about two occasions when he came close to death. How he was strafed by a Japanese Zero fighter and as he threw himself flat he could see the bullets spurting into the ground on either side of him; thank goodness he survived that attack and the second when the Zero came round for another go. And how he managed to scramble out of the Dakota that was meant to be flying him back to India and safety when he realised that it was running out of take-off space and was going to plough into the jungle ahead. Again he survived.

After the war, Richard returned to Ceylon Army Command as a major and it was there he met Eileen. He was making his way to the officers' mess one day when on noticing a lovely young lady he did what any young man would do and gave her a smart salute. Eileen, in fact, was coming home from work and she waved back to this handsome officer in acknowledgement, from several feet up as it happened because she was on an elephant, as young ladies did. That was the spark. They married in Colombo in April 1947 and that marriage has lasted for close to sixty years. And very obviously it is the reason why all you fine young people are sitting there today!"

Richard and Eileen settled down to life on the tea estate. Richard became well known as a sportsman – back in England he had qualified in tennis for Junior Wimbledon; in Ceylon, he played golf off a handicap of three; at the Hill Club and several others, he held the record for the highest break in snooker. At one club someone offered a silver teaspoon to anybody making a break of a hundred or more. After Richard had won a spoon every day for six days the offer was withdrawn. He loved fishing and he caught trout in Scotland, Ireland and Wales well into retirement. And in later years he would chug off to the Windrush valley every week to try his luck there.

By 1970 the newly independent Sri Lankan government had decided to nationalise its whole tea industry. It was a time of some instability and I recall Richard's telling me how he had been surrounded by an excited crowd whilst driving home. He managed to calm them down just as well as some of them wanted to set light to his car with him inside it.

By the time he was forced to leave Sri Lanka, Richard had become immensely knowledgeable about the tea business and he was asked to head a team of experts on behalf of the World Bank to establish a new tea industry in Indonesia. He was there for three years – then it was back to England.

And there he was at the age of fifty-four looking for a job. He found himself competing against twenty-five-year-olds for a post in charge of amenities with the Milton Keynes Development Corporation. In a signal victory over ageism, he got the job.

No surprise really when you think of the CV he must have had by then. But no CV could reveal Richard's special personal qualities – his kindness and generosity; his unfailing courtesy and fine manners; his combining his firm views with a willingness to listen to the other side; his modesty; above all his integrity. As one would expect, there was no trace of racial superiority with Richard. He made a point of becoming fluent in the two principal languages in Ceylon. Many of his and Eileen's closest friends were Singhalese and several of them used to visit Tackley Place in later years. And of course Eileen's father is still held in high esteem at the University of Colombo for his definitive work on the flora of the country. Quite early in their marriage Eileen and Richard decided that they would not be comfortable with the racial attitudes prevalent in Southern Africa in those days and they abandoned thoughts of settling there.

It was a great joy to hear them both give such animated accounts of their recent visit to Sri Lanka - Richard was delighted at the progress of their old estate, at the modern medical facilities for the employees, at the flourishing tea production. By the time of their visit, Richard's foreman from thirty years earlier had died, but when his son heard that Richard was in Colombo, he jumped on his motorbike and rode to see him. He rode for five hours, and then he rode five hours back again. That tells us much, does it not?

We have been privileged to have Richard as friend and neighbour for twenty-five years. And I know how much he valued the friendship in the small community of Tackley Place. In particular, he was much moved by the love and support given him over the years by Sister Monica, Sister Marie Henry and all the Sisters and he described the Christmas Day Eileen and he spent with them in 2003 as one of the best they had ever had.

Above all, I remember Richard as a devoted family man, so proud of his children and grandchildren. Till we left Oxford, he kept us up-to-date on the grandchildren's progress, and it is important, I think, for you to know how proud he was of you all and how much you meant to him.

Richard displayed his family loyalty to the end, visiting Eileen daily till his strength failed. Such can be, and was, the almost mystical beauty of a marriage; such was Richard and Eileen's closeness for very nearly sixty years.

May Richard, in the embrace of the God who has always loved him, now rest in peace.