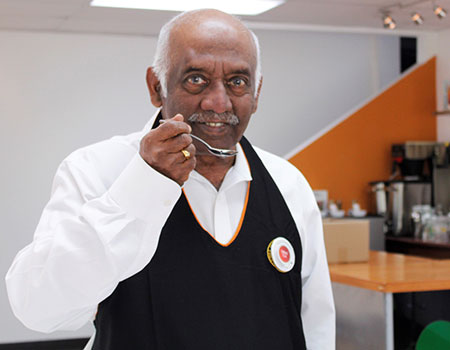 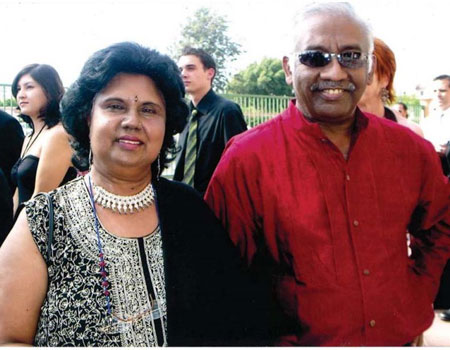 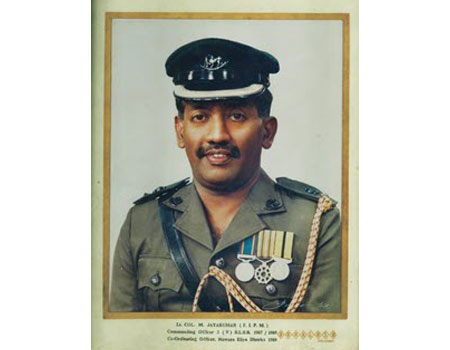 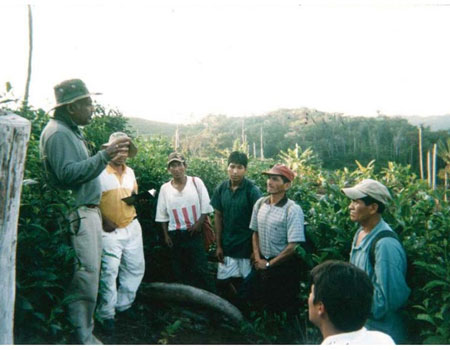 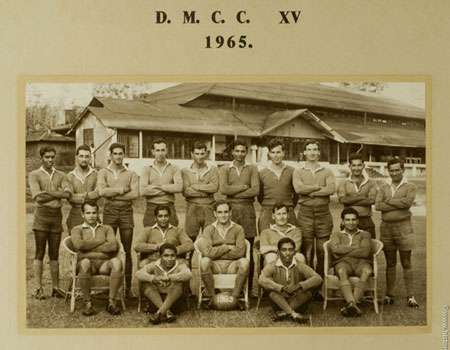 Manik Jayakumar was a storied rugby captain in his youth, a retired lieutenant colonel, regiment commander and a decorated combat veteran in his middle years; and he had managed several award-winning tea estates and helped pioneer organic tea farming in Sri Lanka by the time he was 50.

As it turns out, he was just getting started.

In 1994 in the sitting room of his brother’s house in Los Angeles he launched a small trading company that is now one of the largest suppliers of organic tea and herbs in North America.

QTrade Teas & Herbs is celebrating its 25th Anniversary this year. The company operates a modern 70,000 square-foot blending facility in Cerritos, Calif. Equipped with giant v-blenders and robotic packaging lines, the plant has the highest level of food safety certifications and supplies several of the world’s largest beverage brands and food service chains with both hot and iced teas.

Manickarajah “Manik” Jayakumar, 75, recipient of the 2019 John Harney Lifetime Achievement Award, began his 55-year career in tea as an assistant superintendent at Brunswick Estate, Maskeliya under the watchful eye of David Perkins, a second-generation British planter versed in colonial tradition.

An Unlikely Career in Tea

Jayakumar was not born into a tea family, but quickly advanced from his days as a “creeper” tailing and tending to Perkins’ work and personal needs 24/7. The experience was pivotal as his work with Whittall Boustead introduced him to the challenges of managing a work force of 2,000 on soil exhausted from the cultivation of tea. “I began to see how managers looked after people and the soil in which tea was grown,” recalled Jayakumar. “Perkins spoke the native language. He was firm, not mean. He demanded excellence.” Jayakumar was appointed assistant manager in 1964. Eventually he would earn the FIPM (Fellow of the Plantation Management) degree, the highest awarded by Sri Lanka’s Institute of Plantation Management. Perkins, now in his 90s, recalls Jayakumar as someone special in his life and they continue to correspond to this day.

Manik attended Royal College in Colombo, one of the more famous boy’s preparatory schools in Sri Lanka. The school was founded by the Rev. Joseph Marsh in 1835. Jayakumar, one of six sons of a well-respected physician, was a prefect there with a fine academic record but never attended college. He is best remembered as captain of the school’s very successful rugby team. He calls rugby “a rowdy game played by gentlemen,” an athletic pursuit that he continued through his 30s. He was a member of the Dickoya Club and later played for Dimbulla, a group of semi-professionals in the plantation leagues so well regarded they played many international professional rugby squads visiting Sri Lanka, including the world-champion All Blacks (New Zealand) as well as the London Welsh.

During his school years he was named sergeant of the senior cadet platoon, earned the best cadet officer baton and the Hermon Loos trophy for all-round efficiency, a foretelling of another successful pursuit.

In the 1960s growing tea for Lipton, a company that earned its reputation promoting Ceylon, was good work, but his first job was a disappointment to his mother, he recalls. She preferred he become a doctor – a profession in which his younger brother later excelled.

Jayakumar advanced with Whittall as the superintendent at large plantations in the Dimbulla, Nuwara Eliya, and Uva districts, known for producing the most valuable teas at auction. In 1970 he married Queenie and they had two children, their daughter, Thashika, was born in 1973 and Manjiv in 1977.

Sri Lanka declared its independence in 1948 but tea remained under the influence of large multinational corporations for decades. In 1972 Sri Lanka nationalized the tea industry and the government began operating plantations. In 1985 Jayakumar was assigned the giant, 3,000-acre Poonagala Tea Estate by the State Plantation Corporation. It was about that time he began to question agricultural practices focused solely on increasing yield. He also expressed increasing concern about the treatment of workers.

During his years as a plantation manager he frequently interacted with the Tea Research Institute of Sri Lanka, eventually becoming a member of the working committee tasked with exploring organic cultivation. He became a consultant in a partnership with Stassen Tea, a private venture that partnered with GEPA, a German NGO to establish the first organic tea garden. He recalls that growers at the time “were using 150 pounds of fertilizer to harvest 100 pounds of leaves.” Mono-cultivation had stripped the soil and wildlife was scarce due to excessive use of pesticides. Under his guidance barren estates bloomed again a few years after adopting organic practices. In 2004 he published a scholarly report “Pesticide Issues in Tea” presented at the World Green Tea Forum (OCHA) in Shizuoka, Japan.

Jayakumar joined the army reserves in 1966, a time of peace. “I liked the outdoors and the action. The reserves would step in during national emergencies such as floods to assist the armed forces,” he recalled. In time the unit began functioning more as a unit of the regular army.

During Sri Lanka’s civil war, an insurrection that cost as many as 100,000 lives, Jayakumar led the 3rd Battalion Sinha Regiment. He was named coordinating officer of the Nuwara Eliya District, a central tea growing area, by the country’s president in 1988. It was during this time that he served the tea industry and the military concurrently. This period was especially tragic for both sectors, during an insurgency 17 tea plantation managers were killed including two of Manik’s superintendents, and in the military several of his staff officers were killed, one of whom died in his arms.

Fearing for the lives of his wife and children, he resigned his position as cluster director in charge of six estates and factories in the Poonagala Valley and left the country in late 1989. He found work the next year in Indonesia as general manager of a plantation group where he stayed until moving to the United States in 1993. He moved in with one of his brothers and initially worked in a skilled nursing facility.

“When the owner of the facility sold it, he offered me a $10,000 loan to start my own company,” said Jayakumar. He began trading walnuts and importing products from Brazil, but soon felt the call to tea.

“I wanted to name the company qualitea, Q-U-A-L-I-T-E-A,” recalled Jayakumar. “We tried to register that, and it was already taken so then we tried many other names. Eventually, we tried QTrade. It was my wife’s suggestion. We tried it and it worked,” he said, naming the company after her. “We have been married 49 years. I owe so much to her,” he said.

“We did not specialize only in Sri Lanka tea or Indian tea; we engaged the whole world. That’s one of the reasons for our success. We have product knowledge of all teas, whether it’s oolong tea or Matcha tea,” said Jayakumar.

QTrade has been awarded the largest number of Global Tea Championship trophies, more than 100, with winning teas in every category, he said. This is because the company is willing to experiment, to innovate with unusual inclusions such as chocolates and spices.

“We were bold to experiment. We took on challenges. Some failed, it did not always go well, but we helped revolutionize the specialty category in North America. Historically, the Germans dominated the world for blends and herbal teas. However, it was a standardized product, same size, same everything,” he said.

An example of his curiosity and passion was his work with USAID funded projects to revitalize industries related to tea. Manik spent time in Bolivia, Russia, and Armenia over the years working on these projects. “One project was in Armenia where we were trying to develop pomegranate tea. It was very interesting. I didn’t know too much about pomegranate but fortunately pomegranate is grown extensively in California, so I went and learned,” he said.

“That is when I discovered that pomegranate has a very beautiful and tasty flower and when the flower drops to the ground nobody uses it. It could be a beautiful purple, reddish flower. So, I told them to dry the flower to reduce the moisture and preserve the pink color. They brought me a dryer and I did some experiments in the hotel I was staying. That’s all they needed.”

Locating in the U.S. where labor costs are high was unusual.

“[Clients] used to think they had to get everything done in developing countries. It’s cheaper, that’s a fact. But now we are finding that for speed, flexibility, and market knowledge it is best to have the work done in the U.S.,” he said.

The company initially delivered a lot of small one-pound orders but now competes for the largest clients. The facility is staffed with 125 workers and has state-of-the-art equipment.

His son, Manjiv graduated from Harvard and worked in New York at Goldman Sachs on Wall Street but, like his father, he later chose a life in tea. He now operates the company as chief executive officer.

A Student of Tea

Jayakumar is both student and teacher.

“I’m amazed at what I have personally learned about what is going on in the world and how we are connected. One of the best parts of the industry is that there is always more to learn and discover,” he said.

He currently co-chairs the Global Tea Initiative project at the University of California, Davis, where he is actively encouraging academic and industry collaboration, including with international universities.

“QTrade has always been actively involved in social development in the plantations where we buy teas and herbs,” Manik said. The company played a pioneering role in encouraging tea brands and growers to embrace the Fair-Trade movement.

QTrade still represents and sells teas from the first organic estate that Manik helped start in the 1980s. “We continue our relationship with the workers and have done a lot of social development work at this estate – taking care of the handicapped and assisting in running an elder’s home. Recently we provided solar panels giving very welcome hot water to the pensioners. In March this year we renovated a creche (child-care facility) there,” he said.

In Assam, for example, partnering with clients and local agencies enabled repairs to a school for children, which is also used for adult education after hours.

Philanthropy is inseparable from a business that is based on relationships, says Jayakumar.