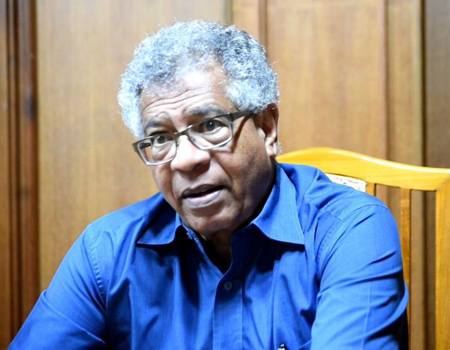 I first set eyes on the larger than life character of Michael J. De Zoysa, sporting an imposing “afro mop” as a 16-year-old schoolboy, when he picked me up from my parents’ house on Castle Street to play cricket for the SSC in a Division III game. We hit it off from day one and thus began a 40-year long friendship – he was mentor, boss and spiritual guide in later years. I called him “Mike” as everyone at the SSC called him by that name. Ironically before that day I had only heard him giving Royal Thomian commentaries on SLBC along with his illustrious cricketing dad Lucien.

In the next couple of years, I got to know Mike’s family, his wife Manique and daughters Lara and Natasha on the many visits to their beautifully set out home at Baurs Flats. However, a well-known secret was that he had many sons; those of us youngsters who played cricket for the SSC, too numerous to mention by name here!

Manique was an excellent dancer and the great man was not too shabby on the dance floor, however, it was her charity work that made Mike really proud of her. She’s been playing bridge since 2004 and Mike spent many weekends and evenings with her bridge partners and fellow players, also driving them to tournaments.

Michael and Manique met in their late teens and had known each other for 55 years. On October 27, they would have celebrated their Golden wedding aniversary.

Of the quiet but naughty girls Lara was an excellent swimmer and now has a Bachelor of Science in Business Management and Economics, followed by a Masters in Real Estate Development and Finance and a post graduate diploma in High Impact leadership from Cambridge University. She found her life partner in Kelvin, whose parents were from the same area in West Indies that Mike’s mum’s ancestors came from. “Lara has gone full circle,” he said. Kelvin in the last five years worked closely with Mike setting up the Ark Asia Pvt Ltd with Mike as Chairman working on a number of public and private initiatives.

Natasha obtained a Bachelors of Applied Sciences (Psychology) and has done her fair share of humanitarian work in Queensland, Australia. She married Adam, an IT practitioner who has now turned opera singer and they have a beautiful daughter, Trinity – the apple of Mike’s eye. She is an excellent scholar and has his sporting genes excelling in hockey, soccer, athletics and tennis.

The early 80s were very enjoyable and carefree days for us youngsters, being driven around by Mike at breakneck speed in his beloved Ford cars for cricket matches whether it be Radella, Kandy, Kurunegala, Galle or Matara, whilst at the same time giving us lessons on the difference of seedling and vegetatively propagated teas etc, that stood me in good stead in later years. On one occasion I had played a school match on Friday and Saturday and was looking forward to having a long siesta on Sunday although forewarned that there was a club match. The domestic aide was given clear instructions to say that I was not at home. Mike turned up at our porch and charged into the house yelling, ‘where are you hiding Mr Anthonisz, I’ll give you 10 minutes to get ready!’

He had a simple cricketing philosophy “put the best side available on the field and play with a winning mindset”. The SSC trophy cupboard bears ample testimony to this fact. Surely this would have rubbed off on his prodigy Arjuna who won the World Cup in 1996 for Sri Lanka.We are going to miss his booming and encouraging voice that would ring out “Come on SSC”! The ground staff of the SSC revered Mike, and whatever Zoysa mahattaya said was always the last instruction they would take on pitch or gound preparation.

Cricket and SSC his second home, followed closely by his passion for the tea industry. He was fiercely competitive albeit, a fair and equitable person after the dust had settled. Mikes influence on me was threefold; Cricket, Tea and in more recent times, the Church.

Mike would ensure that a good tea always got an above average price at the tea auctions. This no doubt incentivised most superintendents hailing from the Western and Uva slopes to make a good cuppa and build lifelong friendships with a man who lived by his credo “A good tea deserves a good price”. Tasting the same tea thrice over was a bore, but that was Mike’s work ethic, much splitting hair on whether the tea was smokey or had methyl salicitate added was the norm.

The sterner side though was his quick temper and boy, did we know to keep away from the firing line!

Given the opportunity to concentrate on the value added side of the business gave me an opening to get away from tasting copious amounts of tea which I gladly accepted. This was a short respite though, as Michael sat me down one day and said, “I have a job for you that you can’t refuse”. The brief was short and to the point – Got a problem with managing the unions and productivity at the Mabole factory I want you to go in, “make it or break it”. I accepted the challenge out of reverence to the man, who had trained me never to take a step back, so much so that I created a two month strike after two day so the job. Michael and the Unilever Tea Division Board stood firmly by my side and with the help of the home-folk chasing the strikers back to work, all was well with an equitable production based incentive scheme introduced. The teabag production capacity of the factory grew from 6 machines to 50 in a space of two years – most of the machines purchased were without capex approval and this was unthinkable in a Unilever set up, but Michael found a way. The factory produced half of the Eastern European countries’ requirements when the markets opened up in 1996 – 1999, a whopping 4000 tons of teabags up from a mere 100 tons of total value added exports per annum. With these successes Michael’s vision was to produce the entire Lipton Yellow Label teabag requirement for the Middle East of 8000 tons per annum.

Unfortunately one-way looking labour laws that justified the downing tools at the drop of a hat and inconsistent government policies on the import of teas for value addition and re-export put paid to this project. Sri Lanka’s loss was Jebel Ali’s gain – this pained Michael who was a vehement critic of inward looking policies in a pseudo open economy. The “Tea Hub” concept and Tea Auction Automation linking all the stakeholders were two of his bucket list projects that got little support from the trade/industry.

A unique distinction was his achievement as Chairman of the Colombo Tea Traders Association, the apex body of the industry for 14 tenures during 1983 to 1999, a record that will stand unbroken at least in my lifetime. His leadership qualities were unquestionable, and the achievements under his stewardship were many including his resolve when serious challenges were posed by the JVP uprising and the LTTE conflict. The auctions continued to be conducted without a break, despite the threats and consequential dangers. Michael was bestowed the singular honour of Honorary Life Membership by the Colombo Tea Traders’ Association, for his service and contribution.

In August this year, he was invited as Guest of Honour at the 125th Annual General Meeting of the Association. It is ironic that, in his address at this event he said, in the context of the launch of the “Ceylon Tea Road Map 2030”, which had taken place earlier that day, “I do not know about any of you; but I shall certainly still be there 10 years from now”. Knowing Michael, I am certain he will be present in spirit, said Michael Tissera delivering a commemorative address in tribute to an illustrious 53 years with the industry.

The final phase of Mike’s life was probably his best, when he dedicated himself to the work of his Lord and Master, an almost unthinkable change that I was fortunate enough to witness. As it was with Mike he went head first into projects that uplifted the less fortunate in our community. What he hated was the propagation of racial and religious discord by self-seeking politicians and he was never afraid to voice his disdain. The church care and concern and reconciliation with those affected by the 30 year conflict, rebuilding houses, attending to medical needs, finding them jobs were Mike’s pet projects. He also enjoyed working with the youth of the church encouraging them to reach out to help those in camps and to teach in pre-schools in the North and East. I learnt of places called Kaively, Puthukudiyiruppu when he talked about his travels to former war torn areas, with boyhood enthusiasm.

Pastor Colton played a big part in giving direction to his life, but it was in 1995 when Eran was preaching about Paul and Silas and how they praised God in a hopeless situation in prison that it dawned on Michael how blessed he was. From that day he decided to follow Jesus and there was no turning back.

In 2013 he dedicated two years of this life for church work. However, after a couple of months he got a call from the Board of Control for Cricket asking him to take on the manager’s job. From December 2013 to 2015 April Mike was doing what he loved best. The Sri Lankan Cricket team did him proud winning the Asia Cup, World T20 and both away Tests and One-day encounters with England.

The day before, he passed away he hosted a few of us close friends for a pre-birthday dinner at the SSC; Cristo Dias, one of his closest school mates related a few of Mike’s exploits on the Rugby field where he won 1st XV colours in 1964/65. STC apparently lost just one match and that due to the indiscipline of Michael who shouted “Adho buroos” just as the penalty kick was taken by Rodney Patternott. He missed the kick and the stern referee re-awarded the same which for Michael’s bad luck was converted. He also goes on record for tackling the referee and later blaming it on poor eyesight and visibility.

As we parted that evening he shook my hand unusually firmly before saying “God bless, take care”.

Always be best of friends, wish the good times had not ended so soon,

What happy times and precious memories,

Though are lives go in separate ways our thoughts are still the same,

One day soon we’ll meet again and until then always remain best of friends…..