Kalutara and its Pioneer Rubber Planters 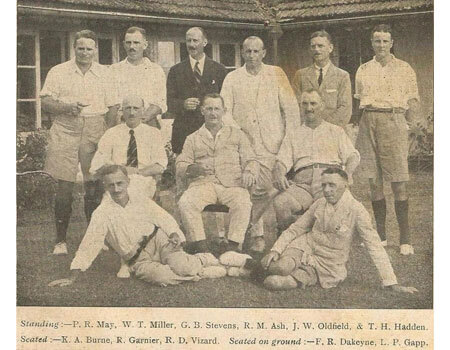 The planting of rubber as a commercial crop took place several decades after tea production had almost reached its peak in the hill districts of Sri Lanka. Since up country areas were almost saturated with tea cultivation, mid and low country areas were being looked upon as potential locations for other crops. Henry Wickham’s importation of rubber seed from Kew Gardens in 1876, and successfully grown in the Botanic Gardens of Heneratgoda provided a great opportunity. The first commercial planting of rubber was in 1883, and by 1904, 25,000 acres were under cultivation. Agro climatic conditions in the Kalutara District and the Sabaragamuwa area seemed to be ideal for the cultivation of rubber. In fact, the Kalutara district came to be the better suited area for successful cultivation of rubber. In 1904 thirty-four tons of rubber were exported from Ceylon. By 1928 the area under rubber cultivation had increased to over half a million acres.

The group photo shown above was taken in Vogan Estate Neboda around 1920, almost one hundred years ago. They were all pioneer planters in the district and were in charge of some of the most productive rubber properties in the country. The men shown here are P.R. May, Manager of Dalkeith Group, Latpandura; WT Miller of Tudugalla, Tebuwana; RM Ash of Pantiya, Neboda; JW Oldfield of Gallawatte, Agalawatte; TH Hadden of Vogan, Neboda; KA Burns of Pallagoda, Bentota; R Garnier of Millakanda; RD Vizard, FR Dakeyne of Vogan, and LP Gapp of Mirishena.

The Kalutara District comprising of Kalutara, Matugama, Agalawatte, Neboda, Tebuwana, and surrounding areas, was found to have agroclimatic conditions eminently suitable for rubber cultivation. With its salubrious climate Kalutara was called the “Richmond of Ceylon” by Britishers living in the island. Among its famous 19th Century residents was the legendary Charles Ambrose Lorenz who lived in his home called Teak Bungalow, in Kalutara and of course the Padikara Mudaliyar NDA Silva Wijeyesinghe who built his mansion “Richmond Castle”, now an orphanage. The oft asked query on the delicious fruit the mangosteen which grows only in the Kalutara area, reinforces the belief in the unique soil and climate of Kalutara. Is it the soil, the elevation, rainfall, or a combination of all these factors?

The lives of the planters seen in the photograph typify to some degree the objective of British colonial rule in India and Ceylon. The colonials did not intend “settling” in the sub-continent as they did in America, Africa, and Australia. The general trend was to come over to the colony and engage in a productive occupation and retire to the home country at the end of their career. The careers of some of them illustrate this observation. Phil May was a graduate of Cambridge University when he arrived in Ceylon in 1914 to work on Ellakanda and later on at Dalkeith where he was Manager for many years. He was an outstanding cricketer and an authority on rubber cultivation and estate management. After working for nearly forty years in Ceylon he retired to Hants, in England. W.T. Miller who arrived in Ceylon in 1904 was in charge of Tudugalle Estate, Tebuwana for many decades and lived out his life in Ceylon. RM Ash arrived in 1911 and was in Pantiya, Neboda for a few years before transferring to the Avissawella area. JW Oldfield who came out to Ceylon in 1907 was in charge of Gallawatte, Agalawatte and was acknowledged an expert on rubber. He served with the Ceylon Planters Rifle Corps in World War 1. He had an illustrious career serving as Chairman of the Planters Association, appointed MP in Ceylon’s First Parliament of 1947. He served as a Director of Lee Hedges and Co for several decades. He was closely associated with the social and political life of his adopted homeland and was the rare exception serving his retirement in his seaside home in Negombo, Frank Dakyne who arrived in Ceylon 1906 worked for many years on Vogan at Neboda was a great half back at rugby. Tom Hadden who came out in 1912 worked as Frank’s assistant at Vogan. Burns who arrived in Ceylon in 1901 was on Pallagoda, Bentota, and Vizard returned to England after about 10 years. Poodle Gapp who arrived in 1908 always worked on estates managed by Lee Hedges and Co where he later was a Director for many years and finally returned to London where he lived in retirement in his home in St James St which he named “The Thatched House” to remind him of his entire working life in Ceylon.

A planter’s life in the Kalutara District was comfortable as could be, given the amenities available in the early twentieth century. There was no electricity off the grid however, and bungalows were lit by paraffin lamps, but if the estate had a factory driven by a generator, the Superintendent’s bungalow almost always was also connected to the power supply. Bungalows had latrines with a “thunder box” and night soil disposed by conservancy labourers. Those were the standards of the day and would suffer in comparison to the amenities available later in the twentieth century. Life went on at an easy pace with limited opportunities for socialisation beyond the confines of the estate. The Tebuwana Club was a popular centre of social activity in the district, with hostel accommodation, a well-maintained cricket ground, and a nine-hole golf course. The club was then the hub of social activity. Most planters travelled to Colombo at least once every month for shopping and for visits to the cinema almost the only source of entertainment available then. There was also the prospect of returning to England on furlough every three years with first class shipping facilities provided, an opportunity to break the monotony of life on the estate. Michael Speer who was born in Ceylon in 1938 in the Joseph Fraser Nursing Home, and whose father H.P. Speer was Superintendent of Glendon Group, Neboda, and Yatadola Group Matugama in the 1950s, recalls some aspects of social life in the district “For my father's next posting in Matugama (Yatadola Group), our local club was at Tebuwana which, like the Talduwa Club, also flooded regularly every year. But Tebuwana had a nine-hole golf course, and this is where I first learned to play this most frustrating of all games. My wife and I also visited Tebuwana Club in 1984, and talked with an old club retainer who obviously missed the old life of the planters, and even remembered my father. Up until a few years ago he always sent us a Christmas card every year addressed to "Lady and Master". He obviously had high hopes of our marriage, as one year the card mentioned "Lady, Master and Baby”! A word about visits to Colombo is also necessary. These took place approximately once a fortnight, usually for the important purposes of picking up cash to pay the estate workers and visiting Elephant House to fill the "beef box". It was also a much-needed break for the family from the lonely estate routine. In the fifties, when estate workers' union militancy was at its highest, the drive to Colombo was often made in convoy with other planters, as there had been a number of cases of armed robbery of payroll cash. Fortunately, nothing particularly bad ever happened to us, and our visits to Colombo were spent pleasantly at the GOH, Mount Lavinia or at the Colombo Swimming Club, with of course, shopping trips to Millers, Cargills, the Apothecaries, Lalchands and a number of other household names familiar to the visiting planters of those days. Infrequent visits were also made to the Bolgoda Yacht Club, where I learned the rudiments of sailing in 1957.”

The loneliness in the life of a rubber planter combined with the area’s “embracing climate” sometimes resulted in liaisons with local women and as one planter exclaimed disdainfully “the seed that was sown was not always rubber!” Many British proprietary planters sold up and returned to the UK after 1948. Local investors stepped in and gradually assumed a dominant position in the industry and were able to capitalise on the soaring rubber prices triggered by the “Korean boom” of the early 1950s. A landmark Ceylonese acquisition was the purchase of Gikiyankanda and Meddagedera Estates totalling around 5000 acres of tea and rubber previously owned by Lord Elphinstone and purchased by the bus magnate Leo Fernando. There was also frenzied acquisition by traditional coconut estate owners who used their accumulated capital to invest in sizeable rubber properties. There were however a few Ceylonese who played a pioneer role in rubber cultivation from almost the inception along with the pioneering British. Notable among them was CEA Dias who owned Wawulagala, Milleniya and Mukalana Estates from the 1920s and was reputed to be one of the first if not the first to introduce budding as a replanting technique to the district.

It is hoped that these notes inspired by the group photograph featured here, will serve to focus on the role of the Kalutara District in the development of the rubber industry of Ceylon and the significant part played by pioneer planters in that regard.