Idyllic life-style of tea estates slowly fades away in India 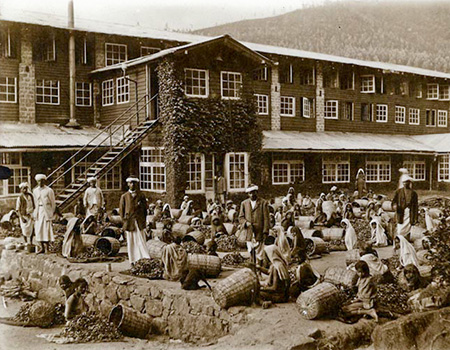 A superintendent relaxes in the porch of his enormous residence. It was the ultimate relic of the Raj. Sprawling bungalows attended by an army of well-trained servants: vegetable gardens to supply the kitchen with an uninterrupted supply of fresh greens: the clubhouse a short drive away for the evening "snifter" at the bar - or a game of tennis or golf: weekends at the nearest hill station or out in the jungles for organised shikar-cum-fishing trips.

Governing this idyllic life-style were two leaves and a bud, the ubiquitous symbol of Indian tea. Whether in the rolling plains of Assam and the Dooars in West Bengal or in the mist-shrouded hills of Darjeeling and the Nilgiris, life on the tea gardens seemed suspended in time: an extended legacy of the hard-living, hard-drinking Scotsmen who first planted and cultivated the stunted green shrubs that made Indian tea literally a household name everywhere.

Up till the late '60s, life on the tea gardens remained rooted in the Raj. Tea garden labourers treated managers and assistant managers like minor gods whose every word was a divine command - labourers referred to managers as mai-bap. Salaries and perks for tea planters were far more attractive than comparative appointments in private sector companies. In the '60s, starting salaries were between Rs 1,200 and Rs 1,500 along with virtually everything else - fully furnished houses, servants, transport, petrol-paid for.

Though social life revolved around the clubs, there was something for everybody. Games included billiards, golf, tennis, squash, football and cricket. There were movie shows and regular dances with live bands organised by the wives. In most estates, regular weekly charter flights arrived from Calcutta loaded with foodstuffs and anything else planters wanted to order.

But it was an anachronism, an era that had to end. Even so, the change in the tea planter's life-style is so dramatic and all-embracing that even 1970 seems like a century ago. In Shillong, Thomas Richmond, 76, nostalgically remembers his 25 years as a tea planter: a life "as good as in rural England". He can talk for hours of the "splendid times" he had but dreads going back to the gardens now. "It will break my heart," he says.

Before Independence, tea companies were almost wholly owned by the British and young men were brought in to look after the estates all the way from England. Remembers Anil Sokey, 64, who spent over four decades as a planter. "Hardly any planter would miss an evening at the club. Even Indian planters made it a point to participate because British bosses ensured that their assistants were active at work, on the playground and in the clubs." Dancing, drinking and generally living it up were images synonymous with planters.

Today, for an old planter, the sight at the Dibrugarh District Planters' Club on a Saturday evening would indeed be heartbreaking. There are normally hardly a dozen planters at the bar and even less playing any kind of game. But that is symbolic of the dramatic change that has overtaken tea garden life. By the early '70s, with even the most die-hard British planter having left, life on the tea gardens became, almost overnight, a case of paradise lost.

The change was hastened when British-owned companies sold out to Indian owners, mainly hard-headed, profit-oriented Marwari businessmen. With the change in management - and the sudden competition in international markets that Indian tea faced - the old life-style of the tea planter was doomed.

"There is little time for recreation now," says Rajiv Wazirchand, 40, an Assam planter: "There is too much paper work." In the mid-'40s, there were nine golf courses maintained by tea clubs in Cachar district alone. Now, tall grass and weeds have claimed them. Interestingly, even the traditional afternoon "lie back" has become a memory.

A job on the estates today is a high-pressure one. Points out Hemendra Prasad Barooah, owner of nine tea estates in Assam: "When the Britishers were in charge, working as a planter was a way of life. Now, it is just another job. Employers annually spend around Rs 2.50 lakh on a manager in a tea garden. Naturally, they want results."

More important, they want quick results. Within the last decade, there have been sweeping changes in the gardens. Most of the new recruits are engineers, agriculture graduates and computer professionals. "Today, companies are only interested in the quantum of work completed, production figures, rising profit graphs and projections for the future," says a new recruit.

Arul Pahwa, 23, a planter in Dibrugarh points out that working hours have stretched to unimaginable levels. Apart from dealing with the labour and filing countless government returns, more time is taken up by the factories which work longer hours than before. Moreover, improved agricultural practices have helped stretch the plucking season to nearly 10 months a year.

The change in life-style has a lot to do with the pressures of the market-place. Today not only is international competition intense, even within the country, consumers have become quality conscious. "You can no longer flog any quality of tea. It has become a buyer's market," says Barooah.

Moreover, if sports and socialising - both synonymous with tea estates - have started fading out it is because of the kind of people who have started joining the gardens in recent years. Almost all the professionals who are now getting in belong to middle class backgrounds: to them the kind of life-style that existed 15 years ago on the estates is totally alien. Their wives would rather stay at home and watch video or television whereas in the old days, it was the women who played a major role in organising the social life.

It isn't as if there aren't profits in the tea business. But employers seem to feel that the tea planter now need not live the kind of life that his British predecessors used to. For a start, a newcomer in a fairly good company begins with a salary of between Rs 1,200 and Rs 1,500 - hardly impressive figures, compared to other private sector jobs.

Traditional perks too have been a major casualty. In numerous cases, owners have moved into the palatial houses that managers formerly lived in, compelling their own employees to shift to smaller accommodation. Assistants have been made to share bungalows.

Managements see the change as inevitable, even necessary. Says K. Datta, deputy general manager, Tata Tea: "British planters tried to create a little England around them. Today, if a young planter lived like that it would be totally incongruous." He says that if perks have been cut, it is a deliberate effort on the part of tea managements to see that planters live the way other Indians do. "We do not want maharajas on the gardens," he says.

The changes have started taking their toll. One example; the heavy turnover among new recruits. Most youngsters who join tea gardens leave even before their probation period is over. Says Anup Chopra, 48, a superintendent in a Jorhat tea garden; "In our time, it was the best paid job and we were well compensated for living in the wilds. Now youngsters would rather become executives in a city."

The aura of authority and power that surrounded the managers and assistant managers has also faded. The boot is now on the other foot. Secluded as their houses are, a sense of insecurity haunts managers, several of whom have become targets of dacoities. Says a Dibrugarh planter: "Our managements do not understand the adverse conditions we live in. Our pleas for more security have fallen on deaf ears."

The traditional system of having a 'garden banker' - usually a local money lender - to conduct transactions has been done away with by some managements to save on commission. They now expect their managers to withdraw huge amounts from the bank and carry the cash to the garden on salary day. The days are well known and managers are known to have been waylaid and looted.

But even more than criminals, it is problems of labour that plague managers. In Assam, until quite recently, the tea garden workers were a peaceful lot. True, they were unionised, but they were fairly well paid and most of them were controlled by the Congress(I)'s Indian National Trade Union Congress. But now the state's ruling Asom Gana Parishad is trying to carve out a base for itself in these areas. The consequence: inter-union rivalry, aggressive workers and, for the managers, a major headache.

In a tense situation, the manager is the only voice of the owners and predictably, the major target for physical attack. Last year, for instance, Manager Suresh Bhalla was ruthlessly hacked to death by workers. And last month, two assistant managers had to be hospitalised with serious injuries after they were attacked in the Behora Tea Estate near Jorhat.

Manager Wazir Khan, who tried to intervene, was also beaten up. The cause for the outrage was that some labourers who had been found asleep on duty had been suspended. "This is only going to get worse," says a planter's wife. "We have to somehow get managements to ensure that our husbands return safely."

Clearly, the glamour of the tea estates is gradually fading and, in another few years, there may be little to distinguish the tea manager's job from that of his counterparts in the city.