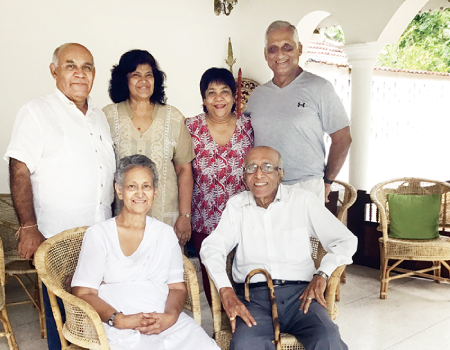 In the latter part of 1971, whilst I was on Eskdale Estate, Kandapola, I received a letter from the estate agents, George Steuart & Co, transferring me to Chapelton Division of Kotiyagala, Bogawantalawa. My wife Malini and I were delighted at this unexpected directive as, at that time, Chapelton was a coveted Assistant Manager’s billet in the Standard Tea Company. Two weeks later, to our great disappointment, a second letter from the agents advised me of the cancellation of the move to Chapelton and, instead, confirmed my transfer to Sheen Group, Pundaluoya.

The sense of anti-climax was for twofold reasons. Firstly, the cancellation of the Chapelton transfer deprived me of an unexpected professional reward; secondly, the move to Sheen would bring me under Derek Wickremasinghe, then an estate superintendent with a well-earned reputation as a formidable disciplinarian and a very difficult master to please. However, In retrospect, as explained later in this writing, I came to the conclusion that the move to Sheen was the best thing that happened to me, professionally.

Derek Wickremasinghe’s entry to planting was, by his own account, unplanned and fortuitous. He had first schooled at St. Thomas’, Matale, and then moved to Trinity College, Kandy. He had been in Napier house and recalls sharing dormitory space with Maurice Hermon, later to become a well-known planter, himself. Leaving school in 1952, he had applied to the then Royal Ceylon Air Force, for a trainee pilot position. Subsequent to several interviews and evaluations, which included a flying aptitude test, for which he had been taken up in to air by one Flight Lieutenant Underhill, he and one Len Rajapakse had tied for first place, as provisional candidates for training at Cranwell, UK. At that time the Royal Ceylon Air Force Commander had been Grp Cpt Bladon.

To Derek’s consternation, his father had refused to give consent to Derek’s career as a pilot. Apparently, Gordon Burrows, famous Trinity teacher, had visited the Wickremasinghe home and done his best to change Wickremasinghe Snr’s mind, but to no avail. Burrows’ argument, that even British Royalty sent their progeny to Cranwell, had failed to move the elder Wickremasinghe.

Soon afterwards, as an alternative, Derek’s father had arranged for him to start training as a planter on Wavendon, Kotmale, an estate belonging to the Thondaman family. Apparently, Snr Wickremasinghe knew S. Thondaman very well. Whilst Derek was at Wavendon, Percy Gray, then superintendent of Sheen Group, Pundaluoya, had visited the Wavendon factory and been pleased with Derek’s responses to his questions on manufacture, and had advised Derek to apply for a position in the GS&Co agency. Some months later, whilst Derek was working on a Rubber estate in Bulathkohupitiya, owned by a relative, Gray had offered him a position on Sheen, to replace Claude Ratwatte, who was going to the UK on a six month furlough. Thus, Derek had started his planting career, in 1953, as junior SD, on Upper Sheen Division. The senior assistant then had been Tom Meldrum, an Englishman, later replaced by Derrick Nugawela.

Derek, single when he assumed duties on Sheen, had been told by Gray that he should put in at least five years’ service before considering marriage. That was an era in planting, when your superintendent could impose conditions on your private life as well. In 1958, no sooner the mandatory restriction ended, Derek married Manel Perera from Matale, a regal lady with a profile out of an ancient Greek coin. In around 1961 Derek had gone on six months overseas leave and, on his return, been appointed to Bridwell Division of Bogawana estate, Bogawantalawa, under Hugh Connor. In 1964, consequent to an acting appointment on Bogawana, Derek had taken over Queensberry Estate, Kotmale, from David Parker.

In 1970 Derek had taken over Sheen from Brian Richards; in his own words, the most satisfying moment of his planting career, to be appointed custodian of the estate on which he started his career. Derek was on Sheen till 1976, when he left active planting and moved to the George Steuart’s office in Colombo. Nationalization of plantations followed soon after and at the invitation of Asoka Gopallawa, the first General Manager of the newly formed Janatha Estates Development Board, he moved to Kandy to set up the JEDB Regional Office. In 1977 Derek moved to Kurunegala, as Regional Manager, JEDB, running the operation whilst in residence on “Erlsonia”, his own coconut estate in Wellawa, till retirement a few years later. There he lived, till his passing on September 27 this year, three weeks short of his 90th birthday.

This brief career synopsis outlines milestones but does not reflect the quality of Derek’s contribution as an agro-manager, in the various positions he occupied. However, my personal experience of five years as his assistant on Sheen, entitles me to pay a deserved and credible tribute, to a man whom I consider to be one of the most competent planters I have met.

Many of the systems that Derek employed in his management were rooted in the lessons he had learnt from Percy Gray, his first mentor and superintendent, further refined by techniques developed by himself, personally. Although Derek’s predecessor on Sheen, Brian Richards, with his somewhat unconventional approach to agricultural management, had made startling changes to the strategies employed successfully by Gray for two decades, the evidence of Gray’s meticulous management style was still accessible and visible, especially in the many well preserved records which detailed his agricultural and management philosophy. One of Derek’s first moves on assuming custody of Sheen, had been to persuade the agents to remove the then Visiting Agent of Sheen, a senior British planter from an estate in Pussellawa. In an unusual move, he was replaced as VA by Gamini Salgado, then an executive director of George Steuarts

Prior to my arrival on Sheen, I had been part of the St. Leonard’s Group, Halgranoya, where my manager had been Chris Mossop, a very fine, experienced planter, but certainly not the martinet that Derek was. That apart, in high yielding estates like St. Leonards and Eskdale, it was relatively easy to produce successful results. On Sheen, on the other hand, with its low-yielding tea and harsh terrain, results had to be grounded out. My initial resistance to Derek’s uncompromising style led to much early friction between the two of us, but I was sensible enough to finally accept that under Derek there was rarely any space for conflicting opinions. Within his tightly controlled strategies and systems, monitored stringently by him at every stage, there was no margin for error. In any event, with his relentless insistence on timely delivery and excellence, he did not accept any.

When I finally left Sheen, on a promotion, it was with both competence and reputation enhanced, simply because I had survived a five-year stint under a very competent, and exacting, superintendent. My worth was underwritten by a genuine improvement in both capacity and skills. As a result of Derek’s unwavering insistence on timeliness and quality of work, I came of age as a planter. Asoka Herat, my fellow SD on Sheen and Rohan Jagoda, my school friend, who had been Derek’s assistant on Queensberry, have echoed similar sentiments regarding their respective stints under Derek.

One significant aspect of Derek’s management style was that the strategic path to desired objectives was personally mapped out by him, with clearly defined protocols, and standards which never varied. Under-achievement was penalized whilst excellence, for which there were neither accolades nor immediate rewards, was accepted as the norm. His treatment of his assistants was fair, detached, unemotional and strictly within the prescribed protocols of the day. There were no indulgences. However, on the regular instances when he entertained us in his estate bungalow, he and wife Manel were very gracious and generous hosts, and we were welcomed by a cheerful, friendly, jocular man, in stark contrast to the unyielding manager who commanded our working life. He skillfully compartmentalized the personal and the professional.

On a visit to Erlsonia, about a year ago, Asoka and I, along with our respective wives, Amitha and Malini, found the Wickremasinghe couple as gracious and lavish as hosts, as they used to be. When Asoka and I gently teased him about the trials he put us through on Sheen, he professed a memory loss though Manel was quick to remind him, smilingly.

Derek also had a personal side which was very rarely on display. When Malini returned to Sheen after her confinement, with baby Mihirini, our first born, Derek and Manel were our first visitors, arriving with a gift of a delicate pair of gold earrings for Mihirini, obviously chosen by Manel herself. When Malini was hospitalized in Colombo for an illness, Derek visited her, carrying a large bunch of king-coconuts as a gift for the patient. I also recall the concern he and Manel both demonstrated, for my personal welfare, when Malini left for Colombo on a temporary professional assignment.

I have tried to draw an objective image of a man, who played a major role in shaping me as a competent manager, though I cannot recall him telling me that his tutelage was designed to make me a better planter. That was more a tangential result of the rigorous regime he subjected me to. This writing is also a tribute to a very proficient manager with a low-key personality, who deliberately maintained a muted profile. He never sought to actively promote his personal or professional image, but his performances spoke for him, whilst his integrity was unquestionable.

In my over half-century of involvement in the plantation sector, I have known many senior planters with deservedly great reputations for competence but, possibly because of his restrained personal style, not many class Derek alongside those plantation giants. In my view and personal experience, in terms of all round competence, and in the delivery of successful outcomes under challenging and restrictive circumstances, it would have been difficult to find a better man than Derek Wickremasinghe.