DAYS OF WINE AND ROSES 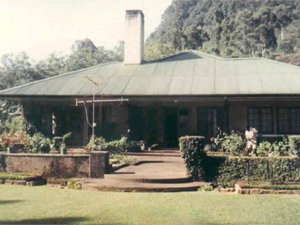 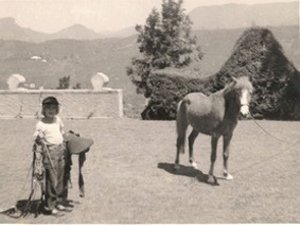 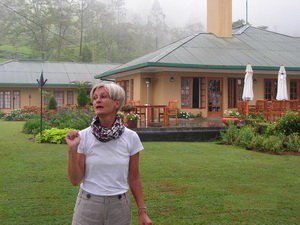 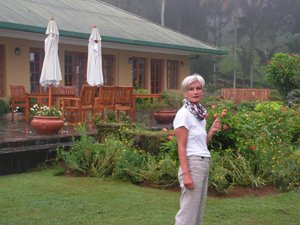 Norwood Bungalow as it stands today is one of the world famous “Ceylon Tea Trails” bungalows, which maintain the ambience and old world charm of an era long gone by but Moiya Hazell Kidde-Hansen is a rare person who has experienced the real thing – she was born and lived at Norwood when life still went on at a tranquil pace and we all had time to “stand and stare.”

Moiya Hazell was born at the Hatton Nursing Home in Dickoya in 1949, as were her older and younger sisters before and after her. This nursing home no longer exists but it was where most planter’s wives of that era went when the need arose. Her father Dick Hazell was planting at Medecoombra Estate for a short while before moving on to Norwood where Moiya spent the first very happy 12 years of her life.

“We never went to school,” recalls Moiya. “Mum taught us at home until it was time for us to school in England.” She recalls that as young children they had to be very self-sufficient and finds ways of entertaining themselves. This was long before the era of computer games and T.V. – a period during which children actually learned to integrate with one another, build relationships with fellow human beings as opposed to machines, and use and develop their imaginations to keep themselves occupied.

She recalls how Podi Singho the cook would make them sugar sandwiches and lovely plaited rolls with a thick layer of butter (the bread was always baked in the bungalow kitchens) and they would picnic in the garden. “If snails happened to invade the garden, we were given a bucket into which we would collect them and be paid one cent for each snail collected,” she remembers adding: “If we got two rupees we thought it to be a lordly sum in those days.” “Mother would read to us every afternoon after lunch – the usual Enid Blyton stories and it was a truly happy and carefree life,” says Moiya.

Moiya remembers their neighbour – Elton Lane – who drove a pale blue American car and one of the children’s greatest thrills came when Lane allowed them to push the button which opened the boot of this magical car. “He had built his own mausoleum and we were fascinated by it and would ride around it and think about him being buried there!” says Moiya.

She recalls her father going snipe shooting in Mannar and on one particular occasion he came home around 4 a.m. and announced to her mother that: “I have a pony in the trailer – you sort him out.” Notwithstanding the hour, her mother did just that and the pony became a part of their lives, starting out the size of a large Alsatian and growing to a size where they were able to go riding every day.

Among her other memories of those halcyon days, Moiya counts going camping in Okanda, near Panama in Arugam Bay. “We had special khaki shorts and shirts and jungle gear made for these camping expeditions,” she says.

“We had a little barking deer called Bambi and ever so often she would escape from her enclosure, and we would have to call out all the tea pluckers to go and look for her,” says Moiya. They also had quite a few other animals including cows, pigs, chickens and rabbits and her father kept a pack of hounds and would often go hunting in the jungles and mountains which lay behind the bungalow.

“My Dad would grow mushrooms and Mum would make her own butter and cream cheese and she would even make our own ham, bacon and sausages,” she says.

Recounting how the Hazells first came to Ceylon Moiya says her father Dick Hazell was originally from Guernsey, Channel Islands and came to Ceylon in 1935. He was a creeper on Norwood Estate, starting out as an S.D. or “Sinna Dorai” and ending up as P.D. – “Periya Dorai.” While planting he had joined the Ceylon Planters Rifle Corps (CPRC) and saw active service during the war in Burma and Egypt along with other planters from Ceylon.

Dick Hazell met Thea, his wife to be in the New Forest in Hampshire while on home leave. It was a whirlwind romance, they married in 1946 and he returned to Ceylon while Thea his 25-year-old wife followed a while later travelling from England to Ceylon on board a troop ship. “And unfortunately my father forgot and no one was there to meet the ship!” recalls Moiya. But Thea was made of sterner stuff and remained unfazed by this slight hiccup. She had stayed two days in Colombo and travelled upcountry to begin her life as a planter’s wife.

“Norwood was a simply perfect place,” enthuses Moiya. She recalls that what is today the Irwin suite at the end of the corridor was the children’s nursery. “We always ate in the nursery and never had a meal until we could put food in our mouths!”

Moiya married at the Scotts Kirk in Colombo and had “a wonderful wedding reception” at the Ballroom of the Galle Face Hotel.

Moiya Hazell has moved around the world considerably since those wonderful days of her childhood and youth spent at Norwood in “Ceylon.” She lived in the Middle East, moved to Denmark and Poland finally South West France. “But I want to return home to Ceylon,” she says. “I want to end up here and finish up where I started….”

Reproduced with kind permission of the author. First published in the Sunday Observer June 2007.