Colonialism was not leftist Mark Bracegirdle's cup of tea

MARK Bracegirdle was born in London on September 10, 1912. On Boxing Day 15 years later, he and his younger brother and their artistic mother, Ina, a suffragette and divorcee, arrived in Sydney, their move to Australia having been sponsored by the Salvation Army Migration Scheme. 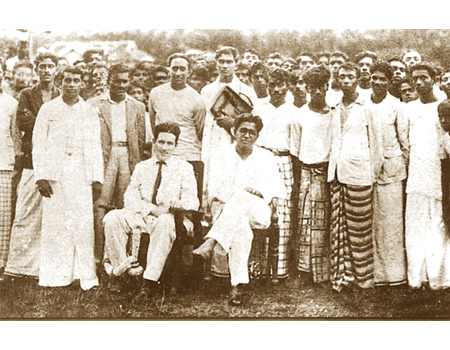 A year later, Bracegirdle became a member of the Young Communist League, itself part of the recently formed Communist Party of Australia. However, his membership of the YCL may not have been widely known to Australian intelligence.

On April 4, 1936, Bracegirdle arrived by ship, the SS Bendigo, in Ceylon (now Sri Lanka), ostensibly to learn the tea business. As a potential member of the white planter raj, the young man seemed set for a life of ease and prosperity. But appalled at the dreadful conditions endured by Indian Tamil workers on his remote estate near Matale, about 145km from Colombo, Bracegirdle soon joined the British colony's nascent communist party, the Lanka Sama Samaja Party, which had been formed on December 19, 1935.

Despite Bracegirdle's lack of formal education, indigenous party apparatchiks realised that, in propaganda terms, one white ex-planter was worth a thousand locals.

Alan Fewster is a former Australian diplomat and journalist. In The Bracegirdle Incident, his third book, he documents how initially the Anglos in the colony were outraged by Bracegirdle, not so much by his politics but by the fact he had "gone native". The white elite petitioned the British governor, Reginald Edward Stubbs, to have the "foreign troublemaker" deported or repatriated - the two were constitutionally different - to Australia on charges akin to sedition.

But the push against Bracegirdle could not stand close legal scrutiny. Indeed the Supreme Court of Ceylon ruled in his favour. The chief justice stated that, in the absence of a declared state of emergency, the arrest and detention of Bracegirdle (who had gone into hiding on the island) was illegal.

Bracegirdle's case was boosted by what, according to Fewster, would prove to be "one of the worst misjudgments in Ceylon's British colonial history". This was the fact the deputy inspector of police, PN Banks, had previously concluded that Bracegirdle "did not appear to be the kind of person who would interest himself in politics".

In this relatively brief yet fascinating book, Fewster documents, on the one hand, how Ceylon's white rulers and bureaucrats regarded Bracegirdle as a "race traitor" who threatened the pre-war tranquillity of the "pearl of the East".

On the other hand, many of the 600,000 oppressed, largely Tamil, tea plantation workers in Ceylon regarded this ardent "communist rabble-rouser" as an inspirational and, at times, revolutionary hero in their struggle against imperialist oppression.

A committed anti-Trotskyite who carried Stalin's Collected Works with him wherever he went, in late October 1937 Bracegirdle voluntarily sailed, not back to Australia but via Marseilles to London to attend a conference of the Stalinist-inclined Communist Party of Great Britain. He never set foot in Ceylon again.

After a lifetime as a left-wing activist, Bracegirdle died in the place of his birth, London, in 1999.

In terms of his rather brief time in Ceylon, it is difficult to determine just how important Bracegirdle was politically. While Fewster argues there is "some patchy evidence to support the theory that Bracegirdle was a Comintern agent", this seems, at minimum, to be inconclusive. What is much more believable is that while in Ceylon Bracegirdle attempted, often without success, to get the often bourgeois-leaning local communist party to toe the orthodox Stalinist line.

Certainly, as Fewster concludes: "Bracegirdle's exploits on LSSP platforms provided a valuable opening for the party in the plantation districts and in the suburbs of Colombo."

My favourite photograph, of the many fine illustrations in the book, is one, most likely taken in early 1937, of Bracegirdle, wearing what Fewster describes as his "not quite immaculate white suit", seated next to LSSP leader Colvin R. de Silva, with other prominent party members, some of whom are wearing traditional sarongs, standing immediately behind them.

It's unfortunate there are no maps: their inclusion in this often captivating book would have made negotiating the sometimes dense text so much easier.

Ross Fitzgerald is emeritus professor of history and politics at Griffith University.