How Much Caffeine Is in White Tea? 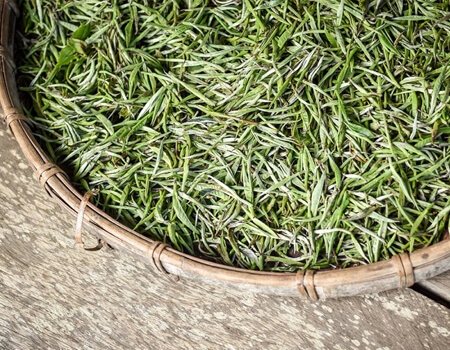 White tea is a popular beverage full of flavor and health-promoting properties.

Unlike black and green teas, which lend bold flavors, white tea is known for its light, delicate aroma and taste. Therefore, many people wondering whether it contains the same amount of caffeine as its counterparts.

This article tells you how much caffeine is in white tea.

What is white tea?

White tea comes from the Camellia sinensis plant and is generally defined as a type of green tea coming from Fujian, a province on the southeastern coast of China. It’s harvested from young tea leaves or buds that are covered in tiny white hairs — hence the name “white” tea

The most popular white tea grades include Silver Needle (Bai Hao Yin Zhen) and White Peony (Bai Mudan), which are the least processed and mostly involve the tea buds rather than the leaves

The main difference between white tea and other teas is that white tea undergoes minimal oxidation — also known as fermentation. As a result, it’s very delicate with a uniquely light aroma and flavor

White teas contain 6–55 mg of caffeine per cup (250 mL), though this varies depending on numerous factors, including (

However, compared with other caffeine-containing beverages, white tea is still a much better option if you’re trying to lower your caffeine intake

If you still want to drink regular white tea but reduce its caffeine content, be sure to only steep it for 1–5 minutes below 194°F (90°C)

Alternatively, you can opt for decaffeinated white tea. Though, be sure to read the label to make sure it clearly states “caffeine-free” or “decaffeinated.” Even then, trace amounts of caffeine may remain.

To ensure no caffeine at all, give herbal teas a try. Unlike other teas, herbal teas aren’t true teas, as they don’t come from the Camellia sinensis plant but rather from dried fruits, flowers, spices, or herbs

Finally, you can opt for caffeine-free sodas, juices, or flavored water.

Generally, a cup (250 mL) of white tea contains 6–55 mg of caffeine. However, it largely depends on the type and size of the buds and leaves, brand, brewing temperature, and steeping time.

To reduce your caffeine intake, steep your white tea for a maximum of 5 minutes in hot water that’s no more than 194°F (90°C). Alternatively, opt for decaffeinated white tea or other beverages.

If you want to give white tea a try, it’s widely available in both loose leaf and tea bag form.