The US’ decision to unilaterally abandon the nuclear deal with Iran is likely to put a damper on Sri Lankan tea exports, a leading tea broking house in the country said.

“… USA’s decision to abandon the nuclear deal with Iran is anticipated to be a major setback for the industry,” Ceylon Tea Brokers PLC said in its first quarter tea industry overview. 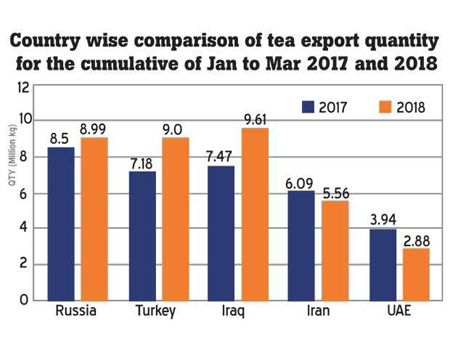 The Iran nuclear deal was reached in 2015 between Iran and a group of world powers, namely the US, UK, Russia, France, China and Germany.

The US has threatened to reimpose sanctions against Iran’s automobile, civil aviation, energy and finance sectors.

However, the European states have been scrambling to ensure Iran gets enough economic benefits to persuade it to stay in the deal.

The total revenue realized for the first quarter from tea exports was US $ 349.17 million, compared to US $ 311.85 million recorded for the same period, last year. The top tea importing nations in the world last year in order were Pakistan, Russia, the US, UK and Egypt, while the main tea exporters were Kenya, China, Sri Lanka and India.