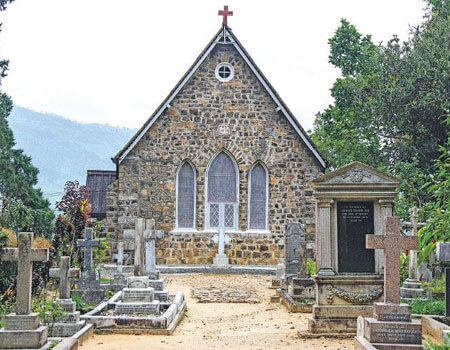 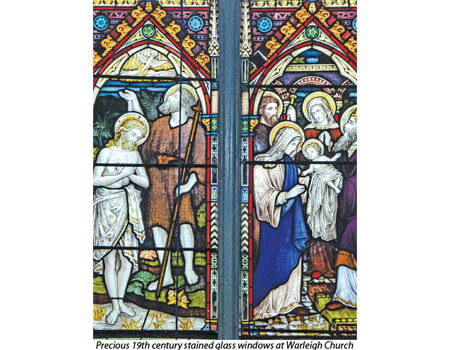 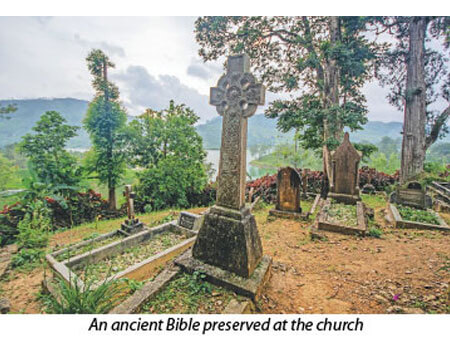 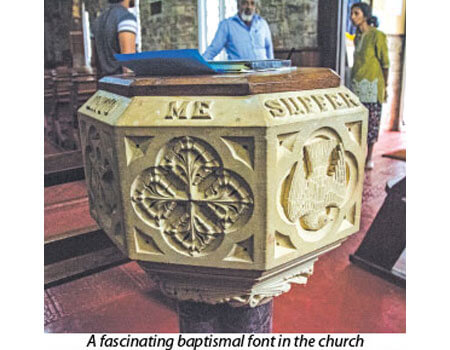 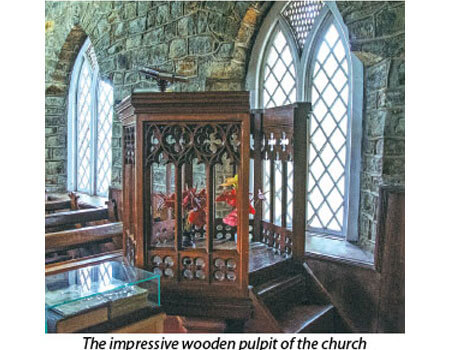 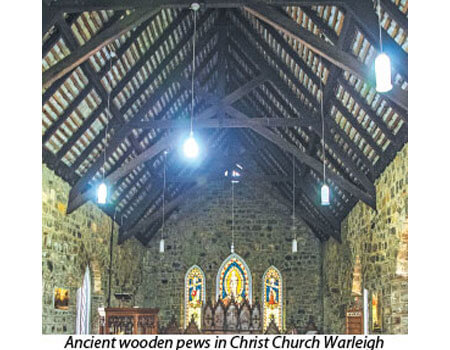 The awe-inspiring 18th-Century Christ Church Warleigh in Dickoya is much more than a church. It is a spiritual centre, an architectural icon, and a historical monument from the colonial era.

Rolling green hills dotted with tea factories, a cluster of small houses, and the reservoir studded with small islets, make the winding Highway (B149) from Maskeliya one of the most picturesque drives. After a half hour, we reached the bank of Castlereagh Reservoir, dotted with tall trees and a sea of lush green tea plantations.

Charming views of women plucking tea leaves in the lush tea gardens of Wanarajah estate, one of the largest tea plantations, unfold near Dickoya. The old colonial-era bungalows and buildings give a distinct British countryside feel to the misty hill towns of the Central highlands discovered by British planters who found the climate here similar to that of England.

A winding Dickoya/Norwood road through the Warleigh Division leads to a 19th-Century colonial church and cemetery known as Christ Church Warleigh which lies around five kilometres from Hatton. This is a poignant reminder of the colonial era tea planters who developed the area, seen beside the road, where Christ Church Warleigh is perched overlooking the hauntingly beautiful Castlereagh Reservoir.

I never knew that this small but beautiful church had such a historic value until our visit to the Castlereagh Reservoir in Norwood and Dickoya in the central highlands en route from Maskeliya.

The church, built in 1878, with solid granite stones, gifted by an Englishman, William Scott, has a cemetery with the tombstones of English planters and their families who never made it back home to Britain.

Entering the premises, we were greeted by its resident caretaker who opened the church for us. The caretaker led us into the church, and taking a peep into its interior, we were fascinated to see the magnificent wood furniture and understand how planters who gave their lives for developing the tea industry maintained the traditions of their faith. The interior, as well as the exterior of the church is clean and neat. The caretaker led us to the interior of the church and showed us the wooden pulpit. There was an ancient Bible inscribed with the year 1879, still being preserved in the church, built during the colonial era, with worn timber pews. Strolling in the cool interior of the Church, we were amazed to see the impressive architecture - an ancient pipe organ and an armchair. The most striking feature of the interior may be the precious 19th Century stained glass windows which tell the story of Jesus Christ in vibrant Gothic style art forms. The glass has been imported from England.

The beautiful floral structure made of porcelain for baptism in the church stands near the organ. The floor is laid out with beautiful floral tiles, also imported from England while the granite walls adorn the copper plates which contain Biblical verses.

The compound of the church is dotted with the stone and marble tombstones in various sizes and designs, in the backdrop of Castlereagh Reservoir, giving a visual feast for photographers. Most of the tombstones are well-protected and well-maintained without weeds, surrounded by flower bushes. It gives a perfect beauty to the place and at the same time reminds us of the people buried here. In fact, British colonial planters’ roots lie in these tombstones in the cemetery around the church and these tombstones are protected and preserved.

Strolling round the cemetery, we came across some eye-catching inscriptions which would bring back memories to any of their descendants who happen to visit. The beautifully carved towering tombstones with words carved on them stand tall against the sky. Some of these tombstones have been imported directly from England while some were bought from Colombo’s funeral companies.

We observed these tombstones closely, walking around them in the sloppy backyard of the church premises and found the tombstone of a British planter named Michael Turnbull (1921-1997) who retired to Britain. He had loved the hill country so much that he had his ashes sent to be interred here. The caretaker told us that now there is no more space in the cemetery as it had only limited space. The church conducts Services every first and third Sundays of the month, in English. The resident caretaker is available at all times to help visitors and worshippers.

The caretaker said, Christ Church Warleigh is regularly visited by Britons as a mark of respect to their loved ones buried here in the cemetery over a century ago. It is open from 8 am to 4.30 pm for visitors. If you are a history buff, whatever your religion, this historic church is well worth a visit on your next journey to the Central Highlands.