The Philanthropic Journey of Dilmah Tea

Merrill Fernando had a dream of restoring the fortunes of the ailing Sri Lankan tea industry, while sharing the benefits with the community. 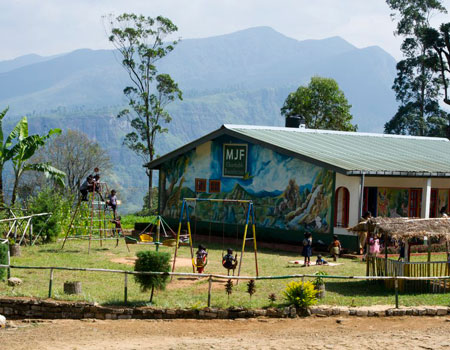 In 1948, when he was 18, Merrill Fernando joined the Ceylon tea industry as a taster. He was one of the first Sri Lankans selected to go to London to learn about tea. Up until then, the prevailing colonial system did not believe Sri Lankans were capable of assessing tea as they ate too much curry, which would supposedly affect their assessment of the taste.

It was witnessing first-hand the exploitation of his country — where only a fraction of the profits reached the producers — that set him on the path to setting up his own brand of tea with integrity.

It was Merrill’s dream to help restore the fortunes of his country’s ailing tea industry, while sharing the benefits of that business with the community. It took Merrill just under 40 years to bring his family tea, Dilmah, to consumers and his idea to fruition. The concept of a young, middle-class Sri Lankan seeking to establish an ethical, producer-owned tea business was at the time both controversial and fiercely opposed.

As Merrill’s Dilmah Tea became a relatively small but internationally available brand, the scale of the social obligation required the establishment of the MJF Charitable Foundation. The foundation offers an alternative economic model that has been designed to be genuinely sustainable and fair. A mandatory contribution of 10 percent of pre-tax profits of all MJF companies goes to the MJF Charitable Foundation. By 2020, the foundation is seeking to have an impact on 18,000 people directly.

At the age of 88 and still deeply involved with his business, Merrill discusses his achievements with Billionaire.

What has been the most challenging part of your life?

The greatest challenge was pursuing the wild dream of a young man of 24 years of age to create my own brand of Ceylon tea. Ceylon/Sri Lanka, fell under foreign domination for 450 years; 150 years each under Portuguese, Dutch and the British, respectively. Under British colonial trading culture, our tea industry was exploited to the hilt and plantation workers were ruthlessly taken advantage of. Our tea, which is actually a finished product, was supplied as raw material to England originally, and subsequently to many rich nations, where value addition, branding and marketing created great wealth, while our workers were made to live in poverty. The sweat, toil and tears of these workers created enormous wealth in foreign nations while they and their families remained needy and in want. I pursued that dream like chasing shadows. However, after a long period of 34 years, I saw the light of day. That little bit of success subjected me to insults, humiliation and bullying by giant multinationals, who dominated the tea trade; all of which I suffered for the sake of Ceylon tea.

What achievement are you most proud of?

I have been successful in all businesses I invested in and my sons, Malik and Dilhan, have been equally successful in their areas of business and social responsibility but that is not my greatest achievement. My greatest achievement is that, following my poor mother’s example of sharing with neighbours and the poor and needy, I am able to share a significant part of my earnings towards helping the poor, the needy and the underprivileged by making a mandatory contribution of 10 percent of pre-tax profits of all MJF companies to the MJF Charitable Foundation, which spreads its activities throughout the country. I firmly believe that my family and I make every possible effort to make this a better world.

Where do you think the Sri Lanka tea industry is headed in terms of automated manufacturing and a Millennial generation not wanting to be manual labourers?

The Sri Lanka tea industry requires completely new thinking to protect it from a future crisis due to a shortage of manual labour. The industry is loath to undertake mechanisation and modernisation, fearing that it will impact the quality of harvesting. We need to look at a semi-automatic process to allow machine-aided harvesting with selectivity.

You are a pioneer of corporate social philanthropy in your country; do you feel this has created a blueprint in Sri Lanka that has been adhered to by other companies?

I bear testimony to what is stated in the Holy Bible that “giving to charity is lending to God and God repays the giver in abundance”. While several of my wealthy business colleagues may silently respect what I do, many of them point out that poverty and disability are karma, according to Buddhism, and that we should not try to change that. I am a Christian and I disagree with that assumption.

Where would be your perfect place to spend a day?

My perfect day would be spending time at a Resplendent resort: Tea Trails, Cape Weligama or Wild Coast, with my childhood friends, my two children and five grandchildren.