The Nilgiris all set to go 100% organic 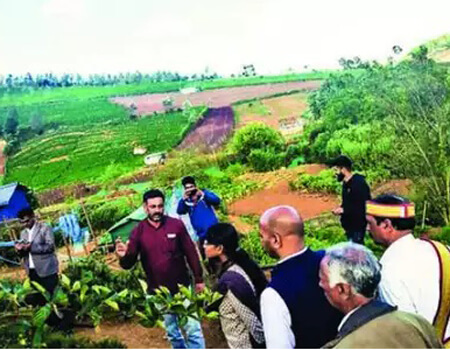 As a first step, 48 farmer producer companies (FPCs) in the district have been selected by the horticulture department for ‘scope certification’.

‘Scope certification’ is issued after inspecting the farming land which has been put under the process of organic farming. The companies, each comprising 100 members, have started organic farming in their lands.

According to joint director of horticulture department Shiva Subramaniam Samraj, it would take at least three years to convert soil into organic.

“However, technically speaking, five years of continuous bio-fertilization would make the soil organic,” he said.

“About 4,000 acres of land fall under scope certification category. The process is underway,” Samraj said.

On converting tea gardens into organic, TANTEA, Tea Board and INDCOSERVE (the apex body of industrial cooperative tea factories in the Nilgiris) have been asked by the district administration to motivate the tea growers attached to them to switch to organic.

It has been decided to ban chemical pesticides and weedicides bearing ‘red’ and ‘yellow’ tags in the district.

A road-map in this connection to bring out a policy is being prepared by the horticulture department. “Once the task is over, a proposal could be send to the government seeking an order for complete organic farming in the district", she added.

Also, considering the huge impact of the recent deluge in the district, bench-terrace method is being advised to the farmers who are practicing farming on slopes.

Farmers not adopting the bench-terrace method will not be eligible for government subsidies, according to horticulture department.

“Hence, we are educating farmers about bench-terrace farming to curtail soil erosion and landslips. The agri-engineering department is roped in for technical guidance to farmers,” Samraj said.

According to horticulture department records, about 6,000 hectares of land is being cultivated with vegetables and fruits at present.

Last July, with 'Organic district' as their motto, 5,000 farmers took out a rally in Ooty, a first of its kind, to stress organic farming in the hill district. The rally was organised by ‘The Nilgiris Organic Horticulture Farmers’ Association’ (TOHFA).

Last February, in a first, about 50 farmers who are into organic farming from the district took part in a three-day workshop under the concept, ‘Conversion of the Nilgiris a Total Organic District’, conducted by the Sikkim Organic Mission, in Sikkim.