Tehran is upbeat. Buoyed by the outcomes of recently wrapped Sri Lankan state visit, Iran has now called for the pivotal Joint Economic Commission talks to be held in Tehran-as early as this August. 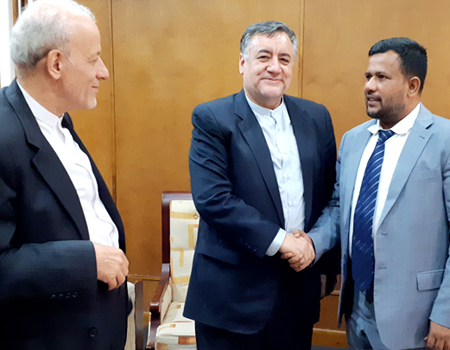 “As per our own assessment, the May 2018 State Visit by Lankan delegation to Iran was very good -and productive” voiced an upbeat (H.E.) Ambassador of the Islamic Republic of Iran In Sri Lanka Mr Mohammad Zaerl Amirani on 11 June. Ambassador Amirani, joined by his First Counsellor & Deputy Head of Mission Mr Ahmadi, was addressing Industry and Commerce Minister Rishad Bathiudeen on 11 June during his courtesy call on Minister Bathiudeen. “Outcomes of the State Visit led by HE President Maithripala Sirisena were good. I also praise Minister Bathiudeen - for your contributory role during the visit. Among the major outcomes were the many Memoranda of Understanding (MoU) signed between both countries in Tehran. These pack great benefits for Sri Lanka. During this visit our HE President Hassan Rouhani also stressed the need to continue with the bilateral Joint Commission for Economic Co-operation (JCEC) meeting series; in this light as well as to start on the new MoUs, we now propose to hold the 12th JCEC in Tehran, ideally this August. Specific dates in August could be mutually decided. This JCEC can also help grow our trade numbers which need a boost” said Ambassador Amirani.

According to the Department of Commerce, total bilateral trade between the two countries last year was at $ 188 Mn –an increase of 4.5% over 2016’s total of $180 Mn. The balance of trade was in favour of Sri Lanka as 94% of total trade ($177 Mn) were exports from Sri Lanka to Iran. Among the leading exports from Sri Lanka to Iran in 2017 were Ceylon Tea (90%), Desiccated Coconut (3%), other vegetable mixtures (2%) and Defatted coconuts (1%). Total imports were only $ 11 Mn - the leading four imports were fish, wires and cables, grapes and plastic items. Till 2013 the imports were at a much higher rate (2011-$1.4 Bn, 2012-$660 Mn) due to incoming petroleum from Iran but since 2013 the import of Petroleum were no more causing a rapid fall in imports from Iran.

Minister Bathiudeen welcomed Ambassador Amirani’s invitation and directed his officials to work on specific dates. “We extend our appreciation for the warm hospitality extended by Iranian President HE Hassan Rouhani, the government of Iran and the people of Iran towards the Sri Lankan delegation. I also praise the many bilateral offers and concessions extended by Iran to Sri Lanka” he said and added: “The series of JCEC has been helpful in advancing our relations in many ways. The MoUs were on drug trafficking, health, standardization, film industry and exchange of students. Since bulk of our exports are a single product (tea-90% of exports in 2017) it is time to diversify our exports basket to Iran. August JCEC can help us in these.”