Tea vs. coffee: Which is healthier for you? 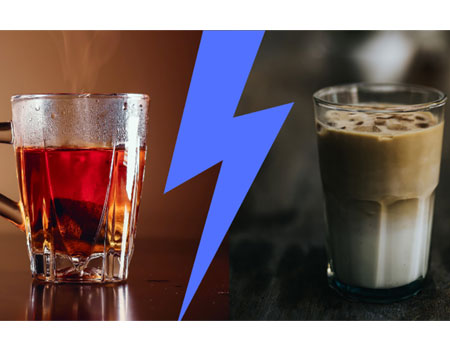 Any great fight matches two opponents with contrasting styles at the top of their games.

And this showdown is just that type of event: a battle between the size, strength, and speed of coffee versus the diverse skill-set and deft maneuverability of tea.

While the clash over which tastes better will rage on for eternity, the conversation over which has more health benefits is just beginning. And we here at Considerable want to help settle it.

In one corner, we have coffee: Best friend of tired humans around the world, coffee has been providing flavor, energy, and a reason to socialize since way before Starbucks could even walk.

Coffee can get fancy when it wants to, sure, but it’s just as comfortable poured into a paper cup at a gas station.

Coffee was brought to America by the British in the mid-17th century and exploded in popularity following the Boston Tea Party in 1773, as many outraged colonists switched over from tea.

Its popularity reached a new level during the Civil War when opportunistic entrepreneurs began selling pre-roasted coffee by the pound, ushering in the era of Folgers, Maxwell House and other producers who soon offered instant coffee and helped pave the way for the blissfully caffeinated landscape we are accustomed to.

Today, coffee is anywhere and everywhere, sold in every flavor and size imaginable — and depending on your preference, most sophisticated indeed. Its signature characteristic is its boost of caffeine, but the health benefits are now becoming more well-known.

For many years, coffee’s health reputation was primarily as a tooth-stainer and heart palpitator,. But most recent studies suggest otherwise.

A 2014 study linked an increase in coffee intake over a four-year period to a lower risk for Type 2 diabetes, while another concluded that coffee can help prevent Parkinson’s.

Coffee has really come out ready to rumble, but it has more punches to throw: Research released in 2012 connected moderate coffee drinking to a decreased risk of heart failure, in addition to possibly improving cognitive function and lowering the risk for depression.

Will that be the knockout blow? Let’s check in with the challenger.

In the other corner is tea: a soothing companion no matter the time of day, endlessly diverse in style and taste, capable of a strong kick or a subtle goodnight kiss.

Tea has an outsize role in numerous cultures around the world, has started revolutions, replaced meals, and throughout it all remained classy. Tea is the most consumed beverage in the world other than water.

A brief, brief history of tea in America

Tea arrived here before coffee, with the Dutch colonists who settled New York (formerly known as New Amsterdam). It was extremely popular in the colonies throughout the 1600s and 1700s, which consumed more tea than England during the era.

The United States has played a pivotal role in the history of tea, both by inventing the tea bag and popularizing iced tea.

Essentially, tea can do almost anything short of leading you to the fountain of youth and handing you a cool cup of eternal life water.

The antioxidants in tea are linked to a decrease of risk in certain cancers, including those affecting the breast, lung, skin and prostate.

Green tea has an antibacterial effect that can prevent cavities and reduce bacteria in your mouth.

It helps your heart by reducing inflammation in your arteries, keeping your blood flowing nice and smoothly and allowing you to spend more fun times going for walks with friends. Before relaxing over a cup of tea.

It can help you sleep better and also may protect against Alzheimer’s.

And let’s not forget: Plenty of varieties of tea are caffeinated, which means it can offer up the same benefits as coffee in the struggle against Type 2 diabetes, liver disease, and Parkinson’s, not to mention the boost in focus and energy that caffeine provides.

In what was an instant classic, the judges couldn’t decide, as both fighters proved worthy of being the champion.

Tea might have the edge in health benefits, but coffee is just so good in ice-cream form it’s hard to vote against it.

No matter what, stop viewing them as simply delicious beverages — view them as healthy lifestyle choices.