Tea industry’s performance in 2018 and prospects for 2019 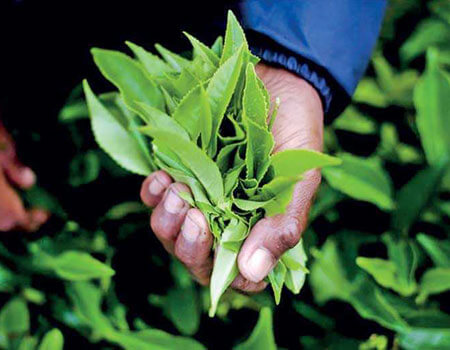 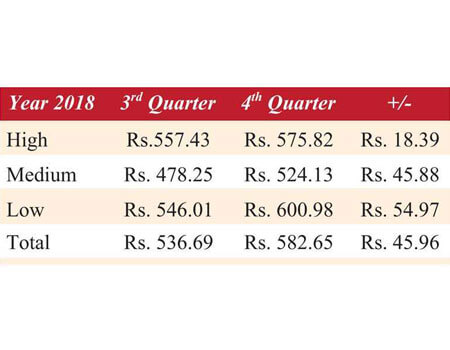 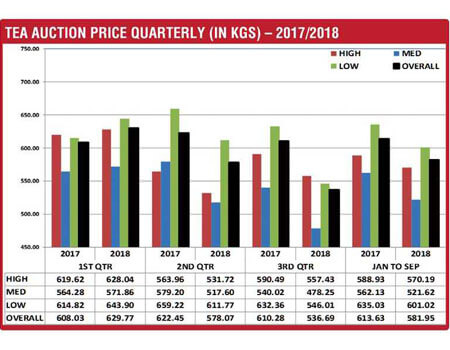 Year 2018 began with a lot of optimism in the backdrop of an excellent year (2017) that was witnessed in terms of tea prices. The first quarter commenced on a high, with the quarterly auction average being recorded as the highest ever. However, as the year progressed, the Sri Lankan tea industry had to face numerous obstacles.

Consequent to banning of glyphosate by the Government of Sri Lanka, tea growers and large plantations, in particular, were forced to use alternative products for the control of weed growth, resulting in MCPA levels higher than permitted for exports to Japan.

As the year unfolded, purchases from Japan declined due to purchases/shipments being made only following prior testing for chemical residue levels. This brought about a market – unrelated to quality – with greater emphasis on the MCPA levels and its suitability for the Japanese market.

In and around May, US sanctions on Iran were imposed which had a cascading impact on Auction prices in Colombo, particularly for the Low Grown (Tippy) teas. There was some optimism for tea prices to turn around towards June/July following the strengthening of oil prices and the weakening of the Sri Lankan Rupee. However, this too did not work out to be a reality following the weak economies in most Middle Eastern countries and Russia, resulting in currencies in the importer countries also depreciating against the US Dollar.

During the second half of 2018, there was ample evidence of global production increasing significantly, primarily due to increased production in the African region. These increases did not reflect too adversely on Colombo Auction prices, as most of the increase comprised of CTC teas.

After much deliberation, stakeholders were successful in negotiating with the Government of Sri Lanka to remove the glyphosate ban through a Special Gazette dated 11 July 2018, a welcome relief to the industry. However, the modalities have taken a considerable period of time for these shipments to be available for the plantations on a regulated basis.

Commencing around September 2018, the Sri Lankan Rupee began to show a significant devaluation against the US Dollar, which possibly to some extent made Sri Lankan tea prices attractive to importers. Since then, we have seen reasonable momentum although the current Auction price levels are below the corresponding sales of last year by approximately Rs. 50 or $ 0.27 per kg. Cumulative Colombo Auction average up to the penultimate sale stood at Rs. 619.11 compared to Rs. 582.17 in 2017, a variance of Rs. 37 per kg. A synopsis of the tea industry’s performance during the year 2018 is set out below.

The first quarter commenced with auction volumes maintaining 6-7 M/kg and as customary with the onset of the dry weather (end February), Auction volumes declined to 6 M/kg and below.

During the period under review, total tea production was 73.8 M/kg compared to 66.8 M/kg in 2017, an increase of 7 M/kg (10%). All elevations recorded a gain, with the High and Medium Growns gaining more significantly.

The second quarter commenced with auction volumes maintaining at 6M/kg and increasing to7.5-8 M/kg by mid-May.

During the period under review, tea production declined 6.1 M/kg (6.8%) in comparison to the corresponding quarter in 2017. Interestingly, April/June showed a significant negative variance, whilst May recorded a 10% increase compared to May 2017. Auction averages continued to decline with Medium Growns, in particular, recording the sharpest drop, quarter-on-quarter with a negative variance of Rs. 44.38. Consequently, the cumulative position eroded to a negative variance of Rs. 11.78 by end June.

Third quarter commenced with auction volumes around 7 M/kg, which declined gradually and dropped to a low of 5.5 M/kg by end September sales.

Fourth quarter – Resulting in the production deficit as at end September, auction offerings during the fourth quarter under review, ranged between 5-5.5 M/kg in the early part and 6.5-7 M/kg in the latter part. 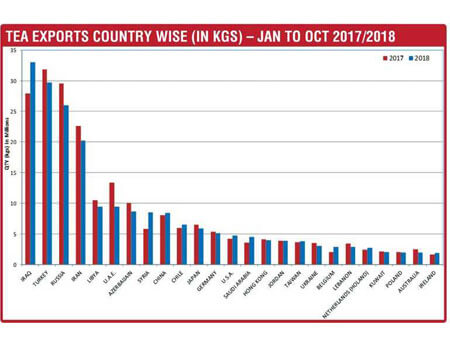 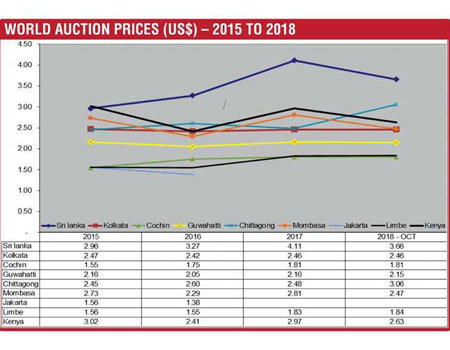 Considering that production up to October totals 251 M/kg and assuming that production in November/December would remain static around the 2017 figures, notwithstanding the labour unrest on plantations in the month of December and the curtailment of tea production, Sri Lanka is likely to achieve the 300 M/kg mark. A reasonable recovery from the disastrous 2nd and third quarters.

Comparison of auction averages continued to reflect significant negative variances vis-à-vis the corresponding period in 2017. Interestingly, auction averages during this period (fourth quarter) up to the penultimate sale of the year shows fair improvement on third quarter achievements. Details of which are set out in Table 1.

We report below the key indicators of the economy.

As at the time of writing, we have only the results of the first half of the year. The overall annual growth is still around the same levels as were seen in the past couple of years. It is indeed promising to note that the Agriculture Sector has performed extremely well during the year, after two disastrous years. However, unfortunately, the Industrial Sector growth rates have declined significantly compared to 2017 and 2016, and the overall growth could not be accelerated beyond the present level.

Agriculture Sector growth rates in the first two quarters of 2018 have seen a remarkable increase when compared against the previous two years. Paddy production can be identified as the major contributor for overall growth in the Agriculture Sector. 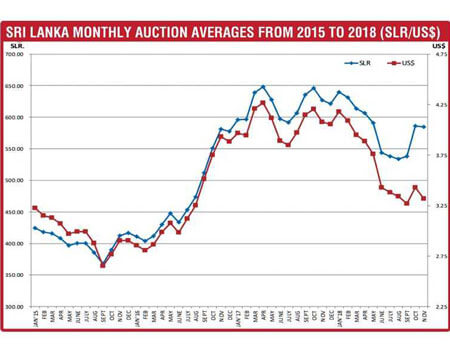 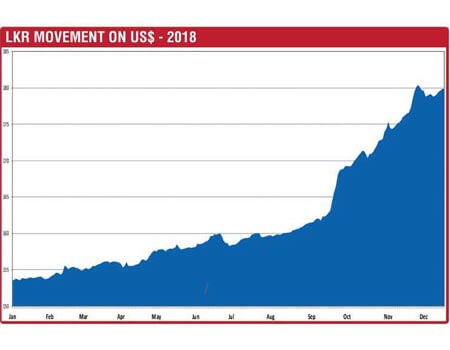 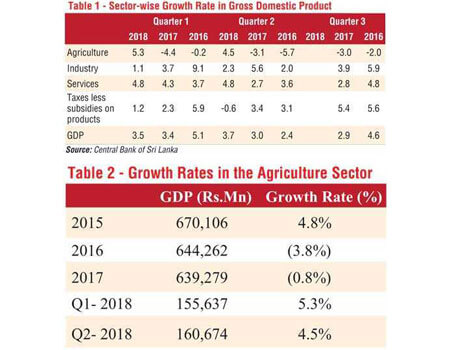 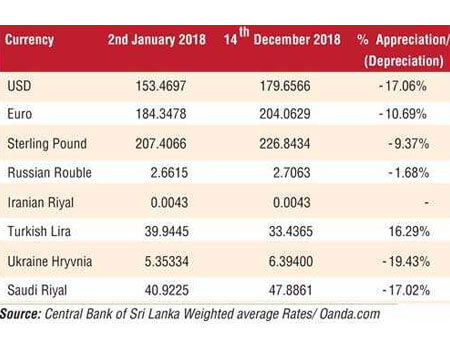 Predicting the market outlook for the year 2019 at this juncture amidst much uncertainty seems a hard task. Nonetheless, a logical approach would be to analyse the supply/demand scenarios that exist and project possible market scenarios based on the most recent developments in importer countries. In analysing the supply situation, it would be relevant to segregate CTC and orthodox tea production. Yet another factor that needs due consideration is the growing demand for tea in producer countries, which may leave lesser exportable volumes.

Global production, in all probability, may show growth in 2018 once statistical data has been tabulated, which would essentially be of CTC origin. Orthodox tea production could be considered in short supply considering the decline in Sri Lankan tea production commencing 2016.

Sri Lankan tea production in 2019, consequent to the Government’s decision to lift the ban on the use of glyphosate (weedicide) is likely to give much relief to the producers and in particular, to the large-scale plantations which would be able to carry-out the required agricultural practices to achieve the full potential of the plantations. Further the Government’s decision last month – to allow a more liberal policy on fertiliser – should contribute favourably. Needless to say, subject to extreme weather conditions not being a reality. However, ageing tea bushes and low productivity levels would be a downside.

Similarly, India with its aged plantations is unlikely to show any significant improvement in its output. On the other hand, Kenya with its steady growth in production in the past several years is poised to achieve a 500 M/kg in 2018 and is likely to play a significant role when assessing the total global supply situation.

Demand growth in China and India, considering the magnitude of these two markets, is likely to influence prices and consumption is expected to outstrip production. USA too could be singled out as a fast-growing market, particularly for instant tea and iced tea segments, whilst imports from Sri Lanka to the US have shown quite a significant growth in 2018.

Other factors that are likely to impact Sri Lankan tea prices

These factors would enable us to predict an upward movement in prices, particularly in the first half for most varieties of orthodox teas. The market demand for teas thereafter, would greatly depend on how the global tea industry would progress during the first half. As we have periodically highlighted, market demand for good quality teas would command a premium consistently throughout the year.