Tea gardens may be green cover, but no replacement for a forest 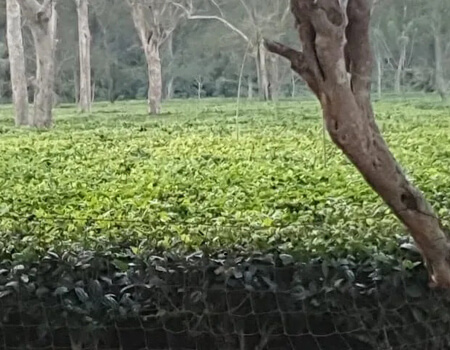 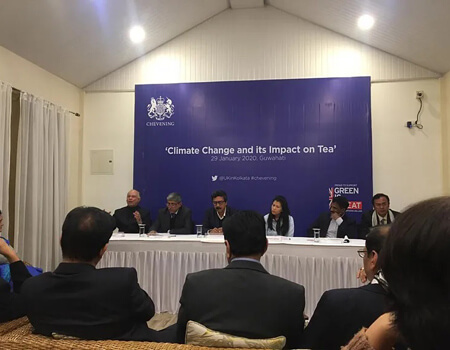 In run-up to COP 26, a Chevening Conversation on ‘Climate Change and its Impact on Tea’ was held in Guwahati where stakeholders discussed strategies to address related issues.

Guwahati: "What we do in the next 10 years will determine whether we do irreparable damage to the small blue dot [earth] in space that is our only home," said Nicholas Low, British Deputy High Commissioner, Kolkata at the Chevening Conversation on ‘Climate Change and its Impact on Tea’ in Guwahati, Assam on Wednesday.

The impacts of climate change are threatening the vulnerable ecosystems, and one major change agent to assuage it depends on local action, observed the deputy high commissioner while opening the conversation.

The UK is contributing by supporting efforts to build climate resilience through evidence-based research and policy-making. UK will be hosting UNFCCC COP 26 in Glasgow in 2020 where building resilience of vulnerable ecosystems will be of immense importance.

Ochintya Sharma, Chevening alumnus and an independent consultant highlighted the impacts of climate change which results in the displacement of people and loss of livelihoods, citing example of Arunachal Pradesh and Majuli Island in Assam. Giving an exemplar of how climate has affected Bengaluru in Karnataka where two decades ago one didn’t require a fan, and now AC is a must, he said that the doomsday clock is ticking.

Conservator of forests, the government of West Bengal and Chevening alumnus, K Balamurugan underlined that the first and most vulnerable to climate change are the poorest of poor, and they don't even have an idea about what is causing the change. He batted for afforestation, saying that the easiest and cheapest way to bring down carbon emissions is to stop deforestation.

Prabhat Kamal Bezboruah, the chairman of Tea Board and Tea Research Association, observed that we are facing water scarcity in dry seasons because small operators are cutting trees in an unregulated manner in Nagaland, Arunachal, Meghalaya and Assam making the Brahmaputra river catchment areas more vulnerable.

Critiquing the clearing of forests in Arunachal Pradesh and Nagaland for creating additional tea gardens, Bezboruah said, "Tea gardens might be a green cover, but it is no replacement for a forest."

Emphasising on the importance of tracking climate data, Professor Chandan Mahanta of IIT-Guwahati noted that our oceans are a concern as the pH level is dropping, that is, they are turning acidic which is affecting aquatic life and food chain.

Mrinal Krishna Chaudhury, assistant director, Assam Energy Development Agency, highlighted the size of tea gardens with their usage of fossil fuel like coal, oil etc. He mulled on the use of renewable and alternative energy sources to save natural fossil fuels. He said there was potential for generating solar energy using rooftop models and barren land in tea plantations. He also suggested the use of efficient cookstoves by plantation workers to cut down the use of firewood.

The conversation was held in the run-up to COP 26 and on the lines of the impact of climate change on tea, as Assam is the largest tea producing area in the country, and second-largest in the world after China. A major chunk of the geographical area of the state is covered by tea plantations and it has a major socio-economic impact in the state.