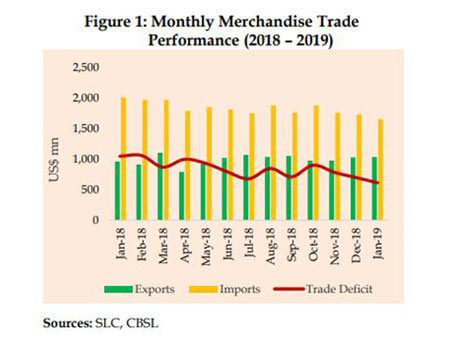 Exports for January grew 7.5 percent from a year earlier to 1.04 billion rupees, while imports fell 17.8 percent to 1.66 billion US dollars, the Central Bank said.

January was the second consecutive month in which exports had exceeded 1 billion US dollars.

January was the second consecutive month in which exports had exceeded 1 billion US dollars.

"Textiles and garment exports increased as a result of high demand for garments from the EU and the USA as well as non-traditional markets such as India, Japan, Australia, China and Canada," the Central Bank said.

Agricultural exports grew for the first time in 11 months due to higher seafood and coconut export growth.

Tea export earnings however fell 0.9 percent from a year earlier to 110.8 million US dollars despite higher volumes.

Meanwhile, imports fell for the third consecutive month, driven by policy measures of the central bank.

In consumer goods, food and beverage imports fell 39.5 percent to 111.2 million US dollars with higher availability of domestic rice, and falling demand for dairy and vegetable imports.

Personal vehicle imports fell 47.9 percent to 49.5 million US dollars, with the Central Bank imposing higher duties and margin requirements, which were only removed in April.

"Expenditure on fuel imports declined due to lower average import prices and lower volumes of crude oil and refined petroleum products despite a higher import volume of coal."

Gold imports were negligible, from 93.7 million US dollars a year earlier, as the central bank had imposed higher duties to curtail gold smuggling to India.

The construction sector was experiencing a slowdown due to over 90 billion rupees in overdue payments from the government for infrastructure projects, which had squeezed liquidity of contractors. (Colombo/Apr17/2019-SB)