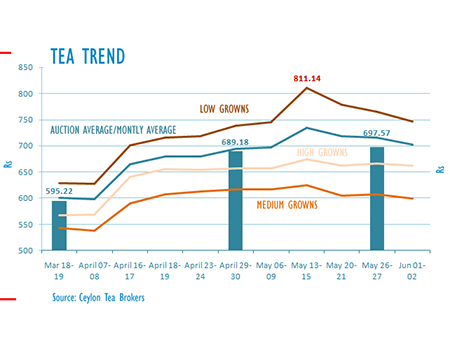 At the previous auction on May 26 and 27 Sri Lanka sold 5.3 million kilograms of tea.

Sri Lanka recorded a tea sale average of 697.57rupees/3.74 US dollars which was the highest ever recorded, Colombo-based Ceylon Tea Brokers, said in a report.

The Low Grown average for May 2020 of 744.52 rupees was also the highest recorded, the firm said.

After spiking sharply in May amid a fall in the rupee, and pent up demand prices have fallen for the three weeks in a row.

In High grown teas Best westerns declined by 50 rupees and more for select high priced teas while in Below bests few were firm and the others declined by 30 to 40 rupees in BOP grades.

There were no offerings in Nuwara Eliya’s this week. Uva/Uda Pussellawa’s were up by 20 rupees.

In BOPF grades Best and Below best categories declined by 60 to 70 rupees and more following quality. Plainer sorts were 30 to 50 rupees easier.

In Medium grown teas, BOP were hardly offered up while BOPF grades declined by 50 rupees and more. Well-made OP/OPA’s were easier by 10-20 rupees per kilogram whereas others together whith lower end teas fell by 20-30 rupees and more.

Well made PEK/PEK1’s were barely steady as Below bests along with lower end teas were easier by 10-20 rupees a kilogram.

Select Best FBOPs were irregularly steady as others were easier by 20-40 rupees. Select best FF1’s too eased whilst others declined by 20-40rupees a kilogram and more at times.

Low grown BP1 select invoices were dearer following special inquiry, while the others sold around last. PF1s were up to 100 rupees a kilogram easier. (Colombo/June07/2020)