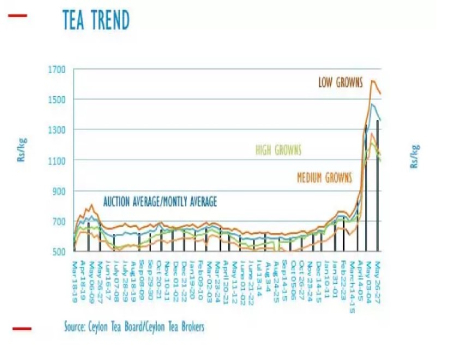 ECONOMYNEXT – Sri Lanka’s tea prices which inflated sharply soared in rupee terms after the collapse of the soft peg with the US dollar, continue to attract good prices, market data showed.

Prices rose sharply in May but eased somewhat towards the end of the month.

In rupee terms, the national average which was 692 rupees at the end of January 2022 rose to 1362 rupees after the currency collapse.

In Sri Lanka Mercantilists and soft-peggers usually claim that inflation comes from imported prices. However, prices of all traded goods, whether imported or exported go up when the central bank prints money to depreciate the currency.

Global prices also go up in dollar terms (commodity booms) when the US Federal Reserve prints money. At the moment commodity prices are booming due to the so-called ‘Powell Bubble’ the worst since the Greenspan-Bernanke bubble which broke in 2008/2009.

In US dollar terms the national sale average on May 31 was 3.6 dollars a kilogram compared to 3.18 last year.

At the May 4th sale auction during May 31-June 01, high grown gained, Ceylon Tea Brokers, a Colombo-based tea brokerage said.

BOPF tea prices had eased while few Select Best had been firm.

OP and OPA Well-made varieties were firm, whilst the balance and bottom advanced.

Select best FBOP/FBOP1 were firm while others eased.

BOP Select Best and best were firm while others eased.

In BOPF category, Best Westerns were 30-40 rupees dearer a kilogram while the others gained to a lesser extent.

Below best lost 30-50 per kilogram while Plainer teas eased 50 per kilogram. Nuwara Eliya’s were irregular and mostly lower. Uda Pussellawa’s declined by Rs.40-60/- per kg. Uva’s too were lower by a similar margin.

BOPF in general were firm to dearer.

High grown BP1s had hardly any offerings while PF1 eased by 50 rupees a kilogram.

Mid grown BP1s were unsold while PF1s declined by 60-80 rupees per kilogram.

Low grown BPIs declined by 100 rupees a kilogram, while better PF1 teas gained 150 rupees while the rest were irregular.