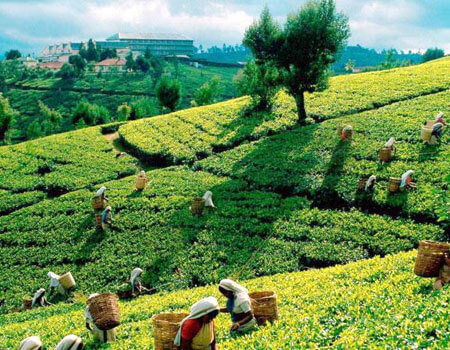 Tea production will increase in the years to come following the replanting program that has been launched targeting 13 million new plants across all estates by next year, said Sri Lanka Tea Board, Chairman Lucille Wijewardena.

“The replanting program has been long overdue. However, as better late than never the program aims at planting 13 million plants in 1,000 hectares,” Wijewardena said, adding that already two million plants have been planted and that by October four million would be planted. The lucrative crop was introduced by the British during the colonial era and since then there has been a marked increase in yield, enabling the country to be (at one time), the fourth largest producer and the second biggest exporter of tea. The ‘Ceylon Tea’ brand has made its way into all major tea consuming countries.

“We have got quality plants from registered nursery owners. The first phase of replanting is at its preliminary stage as it takes around six months for plants to grow. We hope with the two monsoons in May and October more plants could be grown,” Wijewardena said, adding that tea yield this year would reach the previous year’s figure of 307 million kilos.

However, he said the industry could achieve a much higher yield with the application of glyphosate, fertiliser and good weather which are crucial factors to boost yield.

Projection for tea production is based on favourable weather which is expected to be stable during the year.

The absence of glyphosate, the widely used and supposedly effective weed killer resulted in low yields and consignments being rejected by Japan due to the high residue levels found in tea.

Without an alternative weedicide planters had to resort to other weed killers which resulted in high MCPA levels in tea. “Around 75 percent of the MCPA issue in tea has been solved. With the ban in place we expect this issue to be completely solved soon,” the SLTB Chief said.

He said there has not been major fluctuations in prices at the Colombo auction. However, we are gearing up to manage the ‘Rush Crop’ for about 30 days during the festive season.

Currently, a kilo of Ceylon tea in the world market is around Rs. 600. Tea prices plummeted badly during the past couple of years resulting in the industry having to go through a bad patch on top of the wage hike demand by workers that persisted for over six months. However, the SLTB expected export income to cross the US$ 1.5 billion mark this year.

The dearth of plantation workers has been an issue impeding the growth of the industry. The search for more lucrative jobs in urban areas by youth have resulted in a drastic reduction in the number of workers on estates.

On the global tea promotion campaign Wijewardena said the first phase of the campaign will kick-off next month in China and then in Japan, Russia and Ukraine in September or October this year.The second phase will be held in Germany, Saudi Arabia, Iran, Turkey, the UAE, Chile and Australia.