Renegade Tea Estate: On A Mission To Revive Georgian Tea

In 2016, the Georgian Ministry of Agriculture initiated the 'Georgian Tea' program to restore abandoned tea plantations. As part of the program, participants receive financial support in bringing plantations up to international standards for export. According to global industry website STiR, at the height of Georgian tea production in 1985, 152,000 metric tons of tea were produced by mechanical harvesting methods from 60,000 hectares growing tea plants. If Georgia had been an independent country, it would have been the world's fourth-largest exporter of the crop. 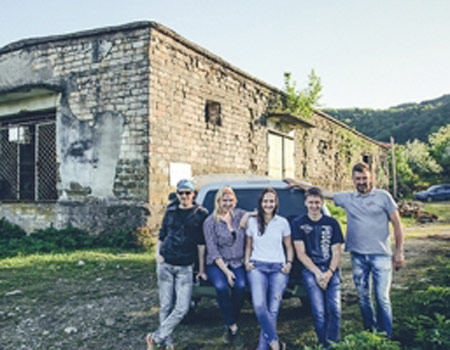 Comparisons have been made with the Georgian wine industry – under Soviet management the focus was on quantity over quality. As wine growing in the country today is increasingly emphasizing natural, organic, and local production, the tea industry aims to follow suit. Tea harvesting by hand is a labor-intensive process, but pickers in Georgia can earn up to USD 11 per day – higher than the average national income and a significant opportunity for people in rural villages who would otherwise be without formal or consistent employment. According to Renegade Tea Estate, the Georgian tea industry once employed approximately 150,000 people, but almost completely collapsed in the first five years after Georgia's independence from the Soviet Union in 1991.

Renegade Tea Estate was established in early 2017 by four Estonians and a Lithuanian moving from the corporate world to agriculture. Their mission is “to bring more authenticity, personality and high quality organic tea to the global tea industry which today is focused on mass production and anonymity.”

While Adjara and Guria (especially the popular brand of Georgian tea 'Gurieli') are well known for tea production, Renegade has focused on the midwestern Imereti region and is headquartered in Kutaisi.

Kristiina Mehik says, "We have made initial investments and preparations - the first steps of rehabilitation have been completed in a plantation near Opurchkheti- the plot has been cleared of weeds, bushes and small trees, and new shoots have started to grow from the trimmed tea bushes. At the moment, we are cleaning a second estate in Mandikori and have started to renovate a building to set up a tea factory in Gumati.”

GEORGIA TODAY met Miina Saak of the Renegade Tea Estate to find out about her experience establishing their business in Georgia and reviving tea plantations that have been sleeping for more than 30 years.

TELL US ABOUT THE TEAM

We have 5 people in our team: four people from Estonia (Miina Saak, Kristiina Mehik, Hannes Saarpuu and Priit Lavits) and one Lithuanian (Tomas Kaziliunas). We are former co-workers, and the basis of our cooperation lies in similar values and in our vision for life - to do something that matters to us and others, something meaningful. Many coincidences lead us to this point where we are now rehabilitating tea plantations in Georgia.

Why did you decide to come to Georgia? And why tea? DID YOU HAVE EXPERIENCE IN AGRICULTURE?

As former office rats, we don't actually have much experience in agriculture, but we all come from small towns and have had some contact with life in the countryside and have always kind of yearned to be closer to nature. When we learned about the collapse of the Georgian tea industry, it intrigued us so much that we decided to dig deeper into it. Then we found out that the Georgian State has a project called 'Georgian Tea' to support the rehabilitation of abandoned tea plantations and we got in touch with the APMA [Agricultural Projects Management Agency], who is coordinating this project. We got a lot of support from them and from other Georgian state institutions. The Georgian Embassy in Estonia also helped us a lot. So, one thing led to another and now we are here. We found some partners from Nepal and India who will help us during this summer to make the best tea we can from the Georgian tea fields.

What have the biggest challenges been?

The biggest challenge so far has been to find a suitable building for the factory. Almost every industrial building near our tea fields had been either demolished or ruined. Building something from scratch was also not an option due to time constraints. Then we found an old unused warehouse in the middle of another abandoned tea plantation. Its location was near perfect and experts confirmed that the main construction is still strong. It requires a lot of resources to set it up as a modern tea factory over the next few years, but we ended up concluding that it is probably our best option going forward. So, we bought it and started to renovate it. Though when we found the building, we realized there was another abandoned tea plantation next to it, we don't plan to take it on just yet. At the same time it seemed inappropriate to have a bushy tea field next to a working factory, and we hope that there are others who would also like to support getting Georgian tea back on the map and help us to set up a modern factory and clear another tea plantation this year.

Also, learning Georgian has been quite challenging as the alphabet is totally different from the Latin ones that we use in our languages- and the versions of letter “K” are quite difficult for us to pronounce- but we are making some small progress in this field as well.

What keeps you going on the hard days?

We were really moved by the sad fate of Georgian tea after the collapse of the Soviet Union and we feel that it deserves a better future. The support from the locals is a major boost for us and keeps us going. Also, the fact that we really do believe that the global tea scene needs more authenticity and personality and we want to offer this. We want to offer high-quality organic Georgian tea and to have real, honest relationships with our customers - no middlemen, no mass production.

What is your long-term vision and what are the steps you're taking to get there?

Our future plan is to build up three small Tea Estates (tea farm + visitor center + small hotels at plantations) in the Imereti region. We see great potential in producing high quality organic tea. Demand for such tea is higher than supply and it's growing fast. We believe that this is the only direction for Georgian tea that is competitive in the world market, as the Georgian cost level is too high for mass-production teas to compete with Africa and South-East Asia.

What kind of reception have you had in Imereti? Has the community been welcoming? Has there been any resistance?

It has been hard to find qualified employees at times, who also speak foreign languages. Also, since people have sometimes not had stable work for many years, it means that their lifestyle and expectations have adjusted. This now needs to be changed again, but it's not happening overnight.

Our overall impression has been good, though, and we've had quite a lot of support from both the government side and from many local people who have showed us how they make tea and helped us in understanding the Georgian culture.

Why should people buy tea from you when imported tea is often cheaper than Georgian? Can a non-connoisseur taste the difference between a mediocre and a great simple black or green tea?

We see great potential for Georgia as one of the leaders in organic tea production, especially if tea production and tourism is combined. Both sectors have excellent potential and, in our opinion, they can be successfully combined. There will definitely be cheaper alternatives to our tea in the future as well, but we believe that more and more people are interested in knowing who and where produced their food and beverages and see the bonuses of purchasing their tea straight from us, not through many resellers as most of the tea business is doing right now.

The tea enthusiasts plan to get an initial test batch of tea ready this year and aim to sell their tea to Europe and North America. The entrepreneurs also wish to help to bring a little life back to the villages that once bloomed thanks to the tea industry. If all plans are realized, then in four years' time, the Renegade Tea Estate plans to offer work to around 300 people during the season.

Mehik says: "This year, we are mainly dealing with the rehabilitation process and keeping the fields clear. Over the next couple of years, the main part of the workforce should get into picking tealeaves."

The word renegade in the brand’s name means rebels, people who think differently. "In our eyes the name renegade describes best our journey: we are rebels who have chosen an extraordinary path and do not let the norms of ordinary life interfere," Mehik says.

Renegade Tea is currently crowdfunding the renovation of an abandoned building for their processing factory, and the revitalization of a third plantation nearby the factory. You can learn more about supporting their mission here.