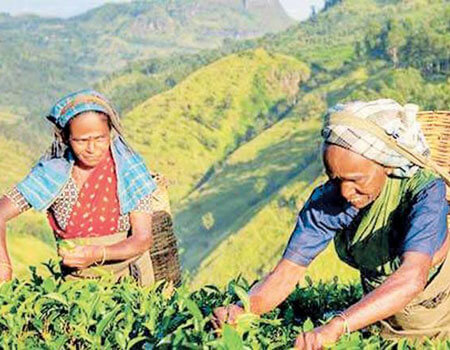 Plantation workers will continue their fight for an increase in their basic wage irrespective of time and concerns of factory owners who are refusing to come to a compromise on the daily wage of workers, Ceylon Workers Congress (CWC) Vice Chairman Arulsamy said.

The indefinite strike which commenced early last week is estimated to cause a loss of around Rs. 240 million per day to the industry.

Plantation workers whose collective agreement with plantation companies which is renewed every two years expired in October. Workers have been agitating for a Rs. 1,000 increase in their basic wage which Regional Plantation Companies (RPCs) have not been able to see eye to eye due to the drastic dip in global tea prices.

“We will continue our struggle for a decent wage increase which companies could grant due to the profits they make,” Arulsamy said.

Discussions between plantation trade unions and plantation company officials have come to a halt due to both sides sticking to their guns. The intervention by higher authorities to settle the problem has not been successful.

Reiterating the stance of the RPCs Employers’ Federation of Ceylon (EFC), Plantation Services Group Chairman Roshan Rajadurai said there is no way that the demand of workers could be met at this point of time when the industry is going through a bad time with global prices for Ceylon Tea dropping.

The Planters’ Association (PA), the umbrella organisation for RPCs in a communique last week reiterated the position of its membership - that a 100% increase in daily basic wages as demanded by the TUs cannot be met by the industry.

“All Regional Plantation Companies pay their employees’ through what is earned as revenue; however the demands of trade union leaders far exceed the capacity. We urge all stakeholders, especially, those whose daily living depends on this industry, to consider the fatality of the industry.”

“The RPCs have advanced multiple productivity- linked models that could easily enable workers to earn beyond Rs. 1,000 per day. The RPC proposal is a 20% increase in the basic wage raising it from Rs. 500-600 and a 33% increase in the Attendance Incentive (AI) up to Rs. 80 plus the Productivity Incentive (PI) and Price Share Supplement (PSS), totaling Rs. 940 per day, amounting to an average increase of Rs. 3,375 per month per worker.”

“Tea harvesters who can bring in harvests above the stipulated amount will continue to be entitled to an over-kilo pay of Rs.28.75 per kilo in excess of the plucking norm which could expand their earnings beyond the Rs. 1,000.

The PA said current TU demands are devoid of incentives which could curtail the earning potential of the worker by locking them into a system that only provided for a basic daily wage.

The PA estimated that the strike would cost the industry Rs. 240-250 million in losses each day in the tea and rubber industry. At a time when the industry is suffering from depressed international market conditions, and the withdrawal of the chemical weedicide from the domestic market, the PA cautioned stakeholders against resorting to measures that would further weaken the industry.

Sri Lanka’s Cost of Production (COP) in tea is the highest in the world and has debilitated the RPC’s revenue generating ability. About 70% of Sri Lanka’s COP is the labour cost.

RPCs would have to absorb a Rs. 20 billion increase in wage and gratuity costs if the basic wages are increased by 100% to Rs. 1,000.

The PA said the price of Sri Lankan tea in international markets has dropped by Rs. 20 each week over the recent past, while almost 35% of tea produced went unsold at the last auction.

The PA reiterated the urgent need for the industry to move away from the daily wages system instituted in the colonial era and progress towards a modern wage model. The employees’ aspirations could be met through a productivity-based model which would require tea harvesters to raise their annual average output by a single kilogram, it said.