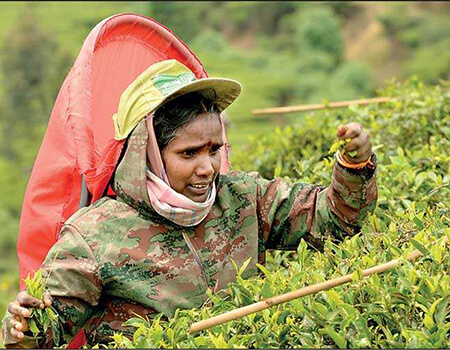 This article is not to discuss the merits or otherwise of the proposal to increase the daily wage of tea and rubber plantation workers to Rs. 1,000. In depth discussions in that regard have gone on for over one year now and they continue even at the time of writing this. Instead, the objective of this article is to discuss the process adopted for wage fixation since the ‘privatisation’ of state owned/managed plantations in 1992 and, the relevance of the statutory Wages Board mechanism to that process.

From the time of the conception of the proposal to ‘privatise’ the management of state owned/managed plantations, it was understood by policy makers and industry leaders that the ‘buy in’ of the Plantation Trade Unions was crucial to the success of the exercise. The late Saumyamoorthi Thondaman the sagacious patriarch of the plantation workers; when extending his support to the change-over did so on one important condition among others; i.e. that that the newly formed Regional Plantation Companies (RPCs) will agree to Collective Bargaining with the Trade Unions (TUs) in dealing with worker issues including the all-important subject of wages. The veteran labour leader, was obviously guided by his vast experience in dealing with the British Controlled Plantation ‘Agency Houses’ and the state management of ‘JEDB’ and the ‘SLPC’ in placing his faith in Collective Bargaining.

At the point of ‘privatisation’ in 1992, the RPCs joined the Employers Federation of Ceylon (EFC) and the EFC, as the TU representing the RPCs entered into the first ‘post privatisation’ substantive Collective Agreement with the TUs led by the CWC, LJEWU and the JPTUC, in 1998. This was preceded by long drawn-out negotiations. Since then, the substantive Collective Agreement was renewed in 2003 and periodical wage agreements have been successfully negotiated thereunder, with the last one signed in January 2019 and terminable in Jan 2021. The daily wage package in terms thereof is Rs. 750.

I do not suggest that the collective bargaining process has been exemplary by any standard or that it could not have been better managed or, more constructively exploited by parties. Regardless of whatever drawbacks and challenges however, the process has prevailed for almost three decades and remained a difficult but reasonably effective mechanism to manage industrial relations issues on the plantations and also agree on worker wages; with industry sustainability being the overriding consideration.

A key to whatever success achieved through collective bargaining was the capacity and strength demonstrated by parties, i.e. the Trade Unions and the RPCs; to negotiate without inhibition but, with mutual understanding of each other’s aspirations, concerns and ability to deliver. Whenever that mutuality was lost and considerations extraneous to the industry took precedence, the strength of the negotiating parties was undermined and that obstructed the path to a rational settlement. This has happened in the past and is happening today as well. Trade Unions instead of working towards a mutual agreement with the RPCs, are now desperately looking for ways and means to give effect to a political promise made during the last General Election over which they or the RPCs had no control and, a proposal in the National Budget to increase the basic wage to Rs. 1,000 per day. It is the Government that has now taken upon itself the responsibility of making the Rs. 1,000 daily wage a reality through state apparatus; The Wages Board for the Tea and Rubber growing Trades.

The Wages Boards Ordinance empowers a Wages Board (WB) for any trade (as at now there are about 45 boards for different trades) to among other aspects, determine through a given procedure minimum rates of wages payable to workers in such trade. The procedure for decision making by a WB warrants tripartite discussion between employers, workers and government nominees, broader consultation with the public which enables objections to a proposal and, a decision by a vote of board members. Employers and workers have equal voting strength in addition to government nominated members who also have voting rights and, who more often than not decide issues when there is a stalemate. Importantly, a fully consultative process is envisaged.

Anyone familiar with wage practices in Sri Lanka will explain that the minimum wages decided by a WB is the base wage in an industry. Nothing less can be paid. Most employers pay in excess of the prescribed minimum to attract skilled people to work. Some establishments have worker involvement mechanisms to determine terms and conditions of employment. In unionised establishments, trade unions engage in collective bargaining with employers to determine terms and conditions, including wages.

When industrial relations issues including wage negotiations are deadlocked the Industrial Disputes Act makes provision for conciliation by labour officials or arbitration. Going by normal industrial relations practice in Sri Lanka, the subject wage dispute should have resulted in a reference to arbitration for a ‘Just & Equitable’ award. That would also have enabled parties to continue negotiations and if possible, record a settlement at the arbitration.

The recent activation of the Wages Board mechanism to give effect to the Rs. 1,000 daily wage of tea and rubber plantation workers is unprecedented. It also brings to question the objectives of the WBs, i.e. the setting of minimum wages and terms through a consultative process. A leading Sunday newspaper had attributed the following statement to a senior labour official a few days ago: “It is mentioned in the WB ordinance that we have to call and consider objections…….. however, that will not change their decision despite the objections placed before them”. I understand that a large number of objections have been received by the WB from within the industry as well to the proposal in issue. If what is reported in the newspaper is true, it is truly sad for the WB system; as the underlying message is that objections are called as the procedure mandates it but, the decision is predetermined by us! Does this not make a mockery of the consultative process as envisaged in the WB Ordinance?

In this overall context, a matter of practical concern for business and industry and the economy as a whole also deserves consideration. That is the impact of the proposed increase in plantation worker minimum wages, on the labour market and in particular, wages across industry. The current minimum wages as determined by different WBs in a few leading trades are given hereunder:

The proposed daily minimum wage of Rs. 1,000 per day for the tea and rubber growing and manufacturing trades will; for 25 days work, amount to Rs. 25,000 per mensem. That will then be the highest minimum wage determined by a WB in the country. It would be much higher than the minimum wage prescribed for example, to a theatre sister or matron under the nursing home trade let alone a worker in a coconut plantation.

Will not a variance as high as this, lead to agitation among workers in other trades which often require higher skills, for unrealistic increases in the minimum wages applicable to them? Will not interventions of this nature, negatively affect the wage equilibrium in the country and lead to unsustainable demands across industry? These are questions that need to be seriously considered by policy makers.

As discussed earlier, WB minimum rates set the base line for business and industry but, they constitute a key benchmark which if meddled with ad hoc, more so for extraneous considerations, can lead to chaos in the labour market. Or is it that when all WBs determine minimum wages, the two WBs concerned will instead decide on a maximum?

My message is that industry wages should be decided by each industry, based on industry related factors, in consultation between employers and workers wherever that is possible. The state is obliged to create an effective regulatory environment that enables the resolution of whatever disputes that may arise in the process. Third parties whoever they may be and, who do not control the management or the finances of an industry, should stay clear and never intervene for considerations extraneous to the industry. That’s how business and industry operate in successful economies in the world and, that was what the Late Suamymoorthi Thondaman the patriarch of the plantation community espoused for the plantation workers.