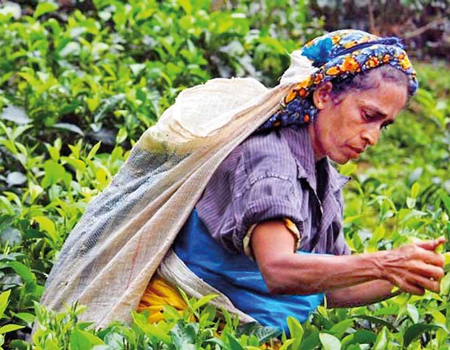 Top officials of the Planters’ Association (PA) of Ceylon are scheduled to hold a crucial round of discussions with Plantation Industries and Export Agriculture Minister Dr. Ramesh Pathirana today on the government’s decision to increase the minimum daily wage of plantation labourers to Rs.1, 000, with effect from March 1.

President Gotabaya Rajapaksa last week issued a directive after receiving the Cabinet approval to increase estate worker wages by Rs.145 to Rs. 1,000 from this March although the Collective Agreement between Regional Plantation Companies (RPCs) and trade unions were renewed less than a year ago.

“If we were to grant the announced minimum Rs.1, 000 daily wage, our cost of production will increase to Rs.730 per kilo. However, the year-end tea auction prices for high-grown teas were at Rs.510 per kilo. We don’t know with what magic we could finance this Rs.220 difference,” a senior PA official told Mirror Business.

The labour component contributes to nearly 70 percent of the cost of production of RPCs. The PA estimates that, if a salary increase is effected, the wage bill for RPCs including gratuity payments would increase by Rs.12-14 billion.

“The hit to RPCs would be Rs.12-14 billion, which is more than the impact from the alleged bond scam,” the PA official lamented.

Although trade unions demanded a Rs.1, 000 basic minimum wage for workers during the renewal of the last biennial Collective Agreement, they reached an agreement with RPCs for a minimum daily wage of Rs.855 with a daily basic wage of Rs.700.

The PA stressed that auction prices at Colombo tea auction for high-grown teas need to reach at least Rs.730 to grant Rs.1, 000 minimum daily wage for workers announced by the government.

However, Dr. Pathirana last week argued that the cost of production would come down for RPCs with recently granted tax cuts and fertiliser subsidy while insisting that RPCs must pass the benefits to workers.

“We are going to talk to the minister to find out the logic behind this move. There are many rumours spreading. However, we will wait until the meeting to confirm those,” the PA official said.

Following the discussion with Dr. Pathirana, the Plantation Industries and Export Agriculture Ministry is coordinating to setup a meeting among RPCs, industry stakeholders, Secretary to the President Dr.P.B. Jayasundara and Treasury officials next week to work out a plan to implement the announced wage hike.

EFC urges govt. not to go ahead with wage hike

The Employers’ Federation of Ceylon (EFC) in a brief message has urged the authorities not to go ahead with the proposed wage hike for the plantation sector workers as it would violate the Collective Agreement entered in 2019.

The statement added that the EFC was “deeply perturbed” to read media reports on the proposed salary increase for estate workers. “At present, the Regional Plantation Companies (RPCs) and two signatory Unions, namely, the CWC and the LJEWU are covered and bound by a Collective Agreement entered into in terms of our law that decided on current wages and which will be effective at least till January 2021.

As such, if the proposed increase is to be mandated on the RPCs, it will not only be inconsistent with the legal provisions as well as the values of ‘core’ International Labour Organization (ILO) Convention 98 on collective bargaining,” the EFC statement said.

It also warned that a wage hike of that magnitude could have a disastrous impact not only on the RPCs but also on the smallholders and eventually lead to the collapse of the industry. “Therefore, we urge the authorities to refrain from going ahead with such proposal,” the statement added.