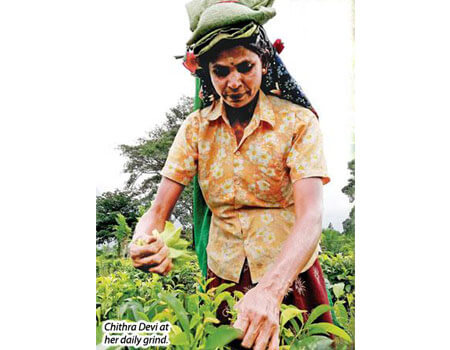 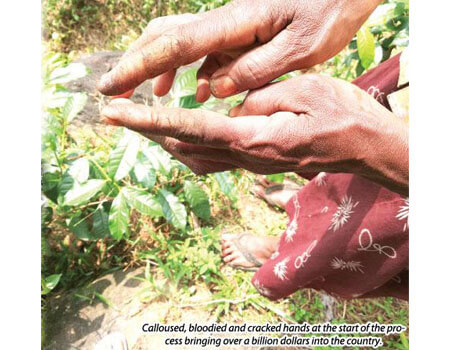 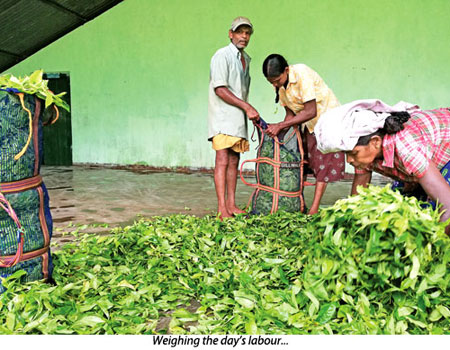 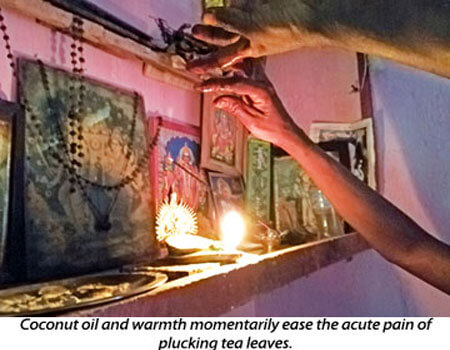 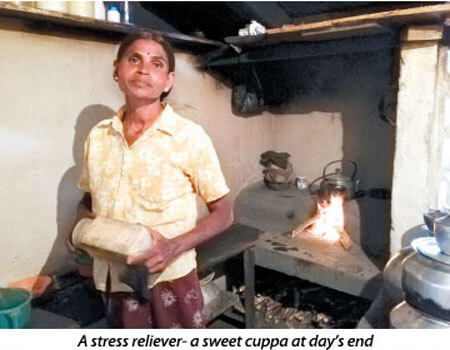 Their ancestors began working in plantations in the 1840s, facing extreme hardship. Nearly two centuries later, little is changed. Despite the country’s boast of becoming the third largest tea exporter to the world, the establishment of a government ministry to take care of the issues of the estate workers, and efforts by workers unions and the non-governmental organisations it is just a small fraction of the estate population who has benefited. Most, work under harrowing conditions for a meagre wage, day in and day out.

Chithra Devi, 45, holds her cracked fingers over the oil lamp which is otherwise lit to pay homage to gods and goddesses. It is around 4.00 in the evening. Devi just returned from the shed near her line room where tea leaves are weighed before being transported to a factory.She spent over eight hours plucking tea leaves that day at a plantation in Siripagama- a village 24km from Ratnapura town.

The labour leaves tea pluckers’ hands calloused and bloodied, and in worst cases cracked. Devi has learnt a trick from fellow pluckers to help subside the acute pain- to apply coconut oil over the cracked fingers and hold them over an oil lamp or heated rice pot.

Devi’s work for the day is still not over. She will soon have to cook a meagre dinner for her family. Her unmarried and ailing sister will help her to prepare the meal- red rice, dhal curry and a gotu-kola sambol. Devi plucked the gotu-kola while she worked in the plantation. The meal is better than what she had for breakfast and lunch- red rice and dhal curry.

Burdened with loans, medical expenses of her mother and sister despite being treated for anaemia herself, Devi has to work in the scorching sun or pouring rain to pluck the 25kg of tea leaves each day. She did the same that day, and earned Rs. 545.

This wage is insufficient to sustain the family, especially during the months where she had to stay home because she felt weak and faint. Devi’s 23-year-old daughter who has migrated to Colombo to work as a housemaid helps her with monthly expenses. Her 21-year-old son who works as a conductor and is boarded in Ratnapura gives her Rs. 500 on the rare occasions she goes to see him at the Ratnapura bus stand.

“I have to keep working. If I don’t, they will throw my family out of our line room,” Devi says.

The line room in question is the same house where she was born in. A small room with an attached kitchen it is kept clean and tidy and is furnished with a bed, cupboard, clothes rack, a table and chairs. A new TV stands in the far corner. Devi’s daughter has bought the TV on a hire purchase scheme. There are days where ten people sleep across the floor and on that one bed, in this very room.

“Sometimes, when I can’t sleep, I lie on the floor till morning because there is no space to move,” Devi recalls.

A few metres away from the line houses are the toilets. One toilet for a line of rooms. The dwellers of all 18 line rooms in that estate bathe in the river, and collect drinking water into pots and basins from a tap that is shared by all.

Sri Lanka Export Development Board’s (SLEDB) official website boasts of Sri Lanka’s tea, commercially known as Ceylon Tea is reputed for its signature taste and aroma, while the island nation is the largest tea exporter to the world and the country’s largest employer since the crop was introduced to Sri Lanka in 1867.

It also adds that the tea is grown under the highest social and environmental standards.

“Nothing is further from the truth,” said Executive Director of Institute of Social Development (ISP) P Muthulingam.

A study by the University of Sheffield reveals that exploitation, including forced labour, is endemic at the base of the global tea and cocoa supply chains, while employers extract massive profits by under-paying wages and under-providing legally-mandated essential services such as drinking water and toilets.

In this backdrop, estate workers demanded a hundred per cent pay raise - Rs. 1000 of their daily wage. Last month was marked with several massive protests by the workers.

A study by ISP, shows that wages matter for three key reasons. As a vital source of household income, necessary to ensure adequate consumption to develop human capital and essential to secure fairness and human dignity, recommends Rs.1,108 as a living wage per day.

However, the Planters’ Association states that the demand cannot be met as the cost of tea production is over Rs. 600 per kilo and net sales average was Rs. 532, incurring a loss of Rs. 68 per kilo. A spokesman for the Association said that 60 per cent of the estate cost is for labour wages, and the industry loses Rs. 6. 5 billion a month.

Muthulingam, who had been an activist since 1991, said that making estate workers suffer for the mismanagement of their employers is unfair and unjust.

“For the past 150 years estate workers have faced the same issues. Nothing major has changed. They still remain exploited and underpaid,” he said adding that nevertheless Ceylon Tea is sold at the highest price in the global market. He said the main concern in the estates are women’s rights. In the industry that is dominated by women- 65 per cent of the workforce- Kanganis or supervisors are still mostly males. Muthulingam says this is deliberately done to intimidate and ‘bully’ the women and make them work harder and long hours.

“Activist Meenachchi Amma who demanded for six-hour work for women passed away last week. Her demand remains a dream. In some parts women work for 10 hours,” he said.

Muthulingam said that estate workers, especially tea pluckers, should be given protective gear such as head gear, boots and pairs of scissors to cut tea leaves. “They face many dangers. Many die from snake bites.

They are attacked by wasps, and leeches crawl on them during rainy seasons,” he says adding that tea plucking is a skilled labour that is mastered by a group of people who have to work every day despite monsoon changes in the weather. According to the activist, in 1992 there were 360,000 workers in estates, but now the number has drastically reduced to 160,000.

“This is because the workers are not looked after well. There is a social stigma attached to this work too. Younger people find it better to work in vegetable plots than working in tea estates because they are paid better and it has a better reputation,” Muthulingam said.

He said the most pressing concern is the salaries. The pay which a worker receives at the end of the month, is subjected to several deductions such as funeral expenses, EPF, and electricity payments. Devi’s payment on some occasions has been as low as Rs. 7,000.

He adds that as a result of the employers’ misguided decisions the tea industry is dying a slow death.

“The solution could be to give the workers a plot of land under a lease agreement so that he or she will get its ownership in 30 years, or give them outright ownership.

Now, most of the land is under the Land Reform Commission,” Muthulingam asserts, adding that at present most of the tea estate workers are Tamils but by changing the way the industry is handled it will attract Sinhala workers too.

Keeping the rice to boil, Devi sips sweet tea from a small glass as her sister looks through the freshly plucked gotu-kola. She will have to go to pluck tea leaves again tomorrow.

“If we get Rs. 1,000 a day we will not have to live this way,” Devi says looking at the far horizon where the sun is setting and daylight is dimming slowly.