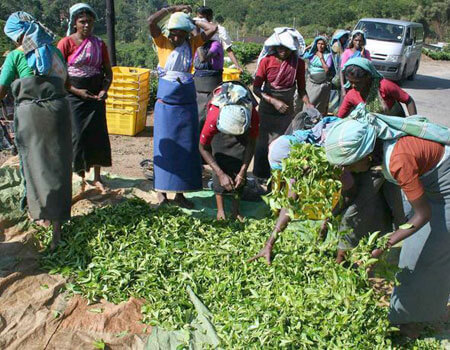 Plantations Minister Navin Dissanayake minced no words when he called upon plantation companies to manage their estates well, making it a vibrant industry bringing in foreign exchange to the country to help raise the quality of life of workers.

The minister told the media at the Sri Lanka Tea Board last week that plantation companies should only manage the estates and leave the ownership to the people.

“Companies should not act as if they are the owners of the estates which were handed over to them only to manage. I will check as to how estates are managed, and if they are not managed properly, I will take measures against the managers,’ Dissanayake said, adding that he has to look into the welfare of workers and companies.

The minister said the ministry would come down hard on those adulterating tea at the expense of quality and tarnishing the image of the brand.

“We will ban factories that are found adulterating tea,” the Minister said adding that the use of MCPA will be banned within the next couple of months.

The Ceylon Tea tussle over the wage hike of plantation workers that persisted for over four months has come to an end according to the Minister who said a political decision was made to grant Rs. 50 in addition to the Rs. 750 agreed upon with Trade Unions and plantations companies last month.

The Rs. 50 increase will be granted through the next month budget for one year without including it in the Collective Agreement.

“We had to listen to the trade unions which were not pleased with the basic wage of Rs. 750. This is a country where politics has a say in everything. The decision to provide Rs. 50 from government funds is a political move,” the minister said.

The agitation led by the trade unions affiliated to Minister P. Digambaram for a basic wage of Rs. 1,000 paid dividends to a certain extent with the Plantations Ministry succumbing to the pressure and agreeing to grant Rs. 50 in addition to the daily wage of Rs. 750.

“Workers could earn Rs. 1,000 a day if they pluck above 18 kgs a day with the incentive per kg increased from of Rs. 26 to Rs. 40. Sri Lanka is one of the countries that pays the highest wages to workers compared to Kenya and Vietnam which pay low wages,” the minister said, adding that he too would be happy if the basic wage could be increased to Rs.1,000.

The tug-of-war for the increase of the basic wage was due to plantation companies stating their inability to pay such an amount given the decline in tea prices in the global market. Tea auction prices slumped to around Rs. 550 per kg last year. The US sanctions on Iran and tensions in other Middle East countries, such as Syria, a major buyer of Ceylon Tea has led to tea prices plummeting over the years.

However, the SLTB is optimistic that tea production this year could cross last year’s figure of 303 million kgs to be around 315 kgs, a five percent growth from 2018.

Favourable climatic conditions, the lifting the ban on Glyphosate and banning the use of MCPA are said to boost production this year and export revenue to increase with the global tea promotional campaigns slated to begin in May. The drought during the first few months last year, the ban on the application of Glyphosate, work stoppages and excessive rains during the second half of the year contributed to the decline in tea production last year. Production dipped 1 percent to 303 million kgs from 307 million in 2017.

Tea exports too declined last year from 288 million kgs in 2017 to 282 million kgs. Earnings from tea exports dropped to US$ 1.43 billion from US4 1.53 billion in the previous year. The industry anticipates an export revenue of US4 1.60 billion this year.

Iran emerged as the leading buyer of Ceylon Tea followed by Turkey, Russia and Iran. With tensions in Iraq easing to a certain extent, exports are expected to improve this year. The situation in Syria, a key market for Ceylon Tea has normalised and tea exports to Syria is expected to pick up. However, the sanctions on Russia and Iran will continue to affect exports to the two large buyers.

“We have been looking at a Barter trade model to trade with Iran. However, no final decision has been made on such a model yet as there are issues that need to be sorted out with banks,” SLTB Chairman Lucille Wijewardena said, adding that the tea promotional campaign will have a long term positive impact on tea exports with awareness raising in 12 countries. The US$ 4.5 billion tea promotional campaign will be held in Russia, China, Ukriane, USA, Saudi Arabia, Turkey, Australia, UAE, Germany and Chile.