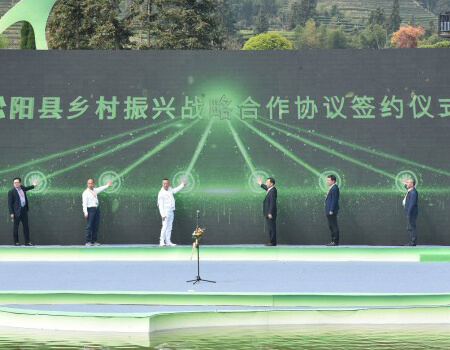 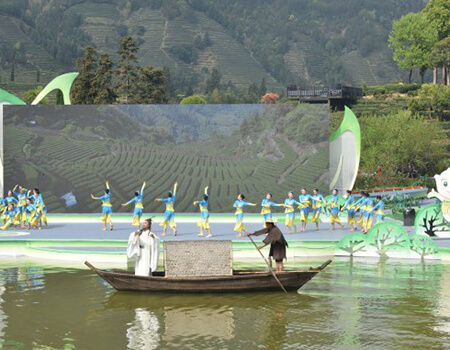 In the wake of a spring breeze in March, the warm breathe of air appears and the fragrance of tea overflows the countryside. On the morning of March 27, the opening ceremony of the 14th China International Tea Merchants Conference – Songyang Fragrant Tea Festival was officially held in Damushan tea garden.

During the opening ceremony, five activities were launched, including Songyang special zone of China tea industry purchasing and marketing platform, "Food in Tea Township" Chinese Tea Tour Food selection Competition, compilation of group standard of technical regulations for brewing Songyang fragrant Tea, opening of Songyang tea category on Taobao, and launching of “Yi Qilai” a livestream platform for helping people with disabilities. This implies that in the future, Songyang tea will not only rely on the tea market in southern Zhejiang to be sold throughout the country, but also land on more online platforms and expand a broader market with the help of big data channels. The development of tea industry will truly realize "digital empowerment", and further promote the full price utilization of tea resources, the tea industry full-chain development, the co-construction of tea brands in the whole city, and the public sharing of tea benefits. Moreover, a strategic cooperation agreement on Songyang County rural revitalization was signed during the opening ceremony.

On the same day, participants also attended the Songyang forum - 2021 China tea industry high quality development summit and tea industry on-spot investigation to talk about the future development of the tea industry. Through Douyin livestream, netizens from all over the country also watched the tea garden Chinese costume show and the process of making handmade tea, among other tea culture shows, and felt the charm of Songyang tea culture from behind the screen.

This year marks the 14th edition of the fragrant tea festival yearly held by the Songyang County. Given that COVID-19 has not yet been completely eliminated, Songyang County has for the first time held the tea festival both online and offline simultaneously. It includes four sections, namely, three themed promotions, four themed competitions, five promotion platforms and public sharing. This activity will last until May 31st.

Songyang tea products and culture have a long history. According to historical records, as early as the period of the three Kingdoms, Songyang began to grow tea; during the Tang Dynasty, the "Maoshan immortal tea" made by Ye Fashan, a Taoist heavenly teacher, once became a royal tribute; in modern days Songyang tea is still popular, it won the first prize of the First West Lake Expo. Today, the tea industry has become the leading industry of Songyang agriculture and the pillar industry of enriching the people and strengthening the county. At present, there are 137000 mu of ecological tea garden in Songyang County, 40% of the county's population is engaged in the tea industry, 50% of the farmers' income comes from the tea industry, 60% of the agricultural output value comes from the tea industry, and the output value of the whole tea industry chain has reached RMB12.7 billion. The tea market in southern Zhejiang, located in Songyang County, is "the first market for green tea in China" and the place where green tea price index is released. The trading volume and transaction volume have been ranked first in the same market in China for more than ten consecutive years, which has promoted more than 10 million mu of tea plantations in more than 10 provinces and cities. Songyang has also won more than 20 national brand gold cards, such as “China's top ten ecological tea producing counties” and “13th five-year Plan - Top ten counties for the development of the national tea industry”.

“Songyang Countryside Organic Tea Township” is the theme of the festival, and also the direction of the transformation and development of Songyang tea industry. Songyang will take “China International Tea Merchants Conference – Songyang Fragrant Tea Festival” as a platform to open a green channel for gathering capital, talents and wisdom, seek a new path for the development of tea industry from a global perspective, create more high-end cultural tea with reformed ideas and innovative methods, enhance the overall image and regional brand of the tea town, and achieve the development of tea culture and tea economy at the same time, so as to truly open up the "golden card" of "China's organic tea town".