Lost status of ‘Ceylon Tea’ will be re-established - Kanchana 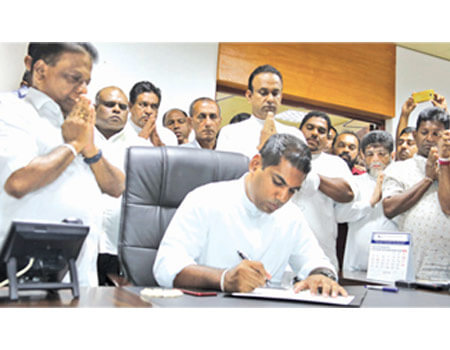 Tea Industry State Minister Kanchana Wijesekera said that he was entrusted responsibilities at a time the Tea Industry was facing a crisis affecting all stakeholders and over 200 tea factories having been forced to close. He said that one of his first priorities would be to re-establish the lost status of ‘Ceylon Tea’.

President Gotabaya Rajapaksa and Prime Minister Mahinda Rajapaksa have made a bold decision by entrusting the responsibilities of managing the Plantation Industry to three law makers who have never held a ministerial portfolio before by appointing Dr. Ramesh Pathirana as the Cabinet Minister of Plantation Industries, and Chanaka Dikkumbura and Kanchana Wijesekera as State Ministers.

Tea Industry Development State Minister Kanchana Wijesekera assumed duties yesterday (29), Plantation Industries Minister Dr. Ramesh Pathirana pledged that he together with his two state ministers Chanaka Dikkumbura and Kanchana Wijesekera will do their utmost in the next few months to uplift the Plantation industry and make the government’s promise of a prosperous nation a reality.

Kanchana Wijesekera, who was appointed as a Member of Parliament from the Matara District in 2015, thanked the President and the Prime Minister for placing their trust in him and giving him an opportunity to contribute towards fulfilling the government’s vision of prosperity and splendour.

He also said that the Cabinet decision to reduce taxes was the foundation for rapid growth in the economy and will have a positive impact on the agricultural and plantation sectors as well.