Kotagala in the red: Losses amidst debts, bad investments 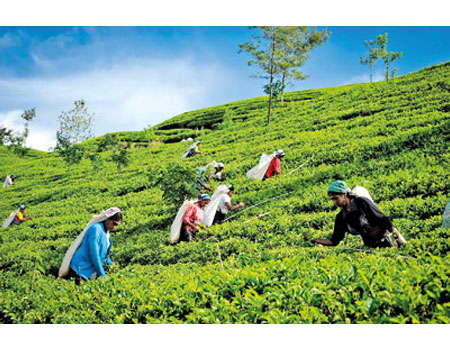 Kotagala Plantations has been in the red and its more recent investments have caused concern even among authorities who have laid out strong assertions that the company needs to get its act right while ratings companies have issued ultimatums on its loan repayment capabilities.

Fitch Ratings Lanka in May this year rated Kotagala Plantations’ at “CC (lka)” that clearly highlights the company’s “continued weak liquidity profile despite improved revenue and EBITDA, asset disposals and restructuring of bank facilities over the previous 12 months.”

The ratings company has noted that Kotagala Plantations is likely to continue facing high liquidity pressures in the next 12-18 months due to substantial debt maturities falling due from May 2018 when the first Rs.250 million principal repayment of its Rs.1 billion secured debenture falls due.

The company is said to hold “little cash, does not have access to unutilised committed credit lines and is greatly constrained from generating positive free cash flow over the medium term due to losses from its rubber plantations and high debt-servicing costs.”

During the year under review the company produced a crop of 2 million kg against that of 2.58 million kg during the previous year showing a decrease of 22 per cent, mainly due to adverse wet weather conditions and decreased in number of tapping days couple with the take-over of Millewa Estate by the government, which is one of the high yielding rubber estates under Kotagala Plantations PLC.

Even though the company has partially sold off some of their assets and also attempting to sell its Cambodia operations it is learnt that the company is still in dire straits.

With authorities sounding the alarm on Kotagala Plantations it is interesting to find out what could be done about the company; if it would continue its operations under Lankem or would new investors need to join hands or simply be sold off to revive the estates that were once the best among the plantations and one of the first to be privatised.

Kotagala Plantations announced in 2012 their US$70 million project to grow rubber on a 20 hectare plantation in Cambodia but since then the company has been on a downhill with a number of middlemen obtaining money acting as brokers; and today it has become a problem for the company so much so that even the state authorities have compelled them to withdraw the company’s involvement in the project.

Official sources at Kotagala speaking on anonymity said that the authorities have approached them and asserted that the company needs to close the operations in Cambodia.

In 2011 Cambodia was setting up its banking network and was opening up to investments in the agriculture sector as there was a sudden surge in deposits and the economy was just making a turnaround.

In fact a Reuters report of June 28, 2011 states that Cambodia which was also due to open its stock exchange that same year was attracting investments to rural areas while foreign firms from Vietnam, Thailand, and Malaysia and beyond were “scrambling to buy land and expand rubber and rice plantations.”

It was around 2012 that the company officials visited Cambodia to find out if there was a possibility of venturing into a rubber plantations project there and subsequently paid an individual by the name of T. Mohan, CEO of Virtus Group in Cambodia, $1.16 million as broker fees to carry out the deal of purchasing property to plant rubber on 15, 000 hectares. But this did not work out.

To carry out these transactions Kotagala Plantations had obtained a loan from National Development Bank.

The eventual property that was purchased under the Kotagala Plantations was said to be not suitable as the nurseries “were not up to standard” and the company had found that they would need to plant fresh nurseries to obtain healthy plants to do the planting in the balance area.

Later the company approached a Korean company through Duksan Perera, acting as a Senior Manager of his company Duksan Industry Co. Ltd, and Duksan Techopia Co. which held about 60 per cent of the shares of BNA Corp. through an agent in Malaysia, Agrinexus.

40 per cent of the firm BNA Corp. in Cambodia was held by its President Back B. Kim who was also given an advance of US$1 million since he had mortgaged 20 per cent of his shares to Kotagala Plantations.

BNA Corp. holds a total of 7500 hectares out of which 3000 hectares had been cleared for planting and of this only 2500 hectares was planted and the balance needed to be cleared and planted.

Kotagala Plantations deposited a sum of $5.8 million in their ESCROW A/C in Cambodia that was lying there without accumulating any interest as this account was not subject to any interest.

Monies were paid out to the Mr. Mohan and Mr. Back from this account in addition to another $1 million allocated for the maintenance of the property that the company was to buy.

Consolidated Rubber Plantations Pte Ltd is a company registered in Cambodia with its Chairman and Director being Ranjit Chrisantha Peiris.

Cambodia Rubber Plantations Industries Ptd Ltd. Established in 2011 is based as a registered company in Cambodia with its Chairman and Director being Kamal Gardiye Punchihewa.

Even with a manager established there to oversee the operations Kotagala Plantations would be unable to reap the benefits until about a four or five year period. But these properties yielded no income.

An agreement was made and entered into in Cambodia on May 9, 2014 between Lanka Agro Plantations PTE LTD and BNA (CAM) CORP, which specifies that all expenses incurred by Lanka Agro Plantations PTE LTD should be reimbursed by BNA (CAM) CORP commencing from March 1, 2014. This reimbursement receivable has been recorded during the year ended March 31, 2018 and made to reflect in equity, as stated in the Annual Report of Kotagala Plantations 2017/18.

Fitch Lanka Ratings has asserted that the company may incur an additional $4.1 billion (around Rs.653 million) in debt if it completes its acquisition in Cambodia, which was initiated in 2012. This debt will need to be funded through borrowings. The project is not expected to yield significant cash flow in the medium term which, together with the additional borrowings, could further weaken the company’s leverage position.

However, Kotagala believes it has the flexibility to defer the acquisition or sell it to a third party if required.

At present, it is learnt that the company is looking at options of selling its Cambodia operations and is now trying to find a buyer in this regard.

Kotagala Plantations bought Union Commodities Ltd, a tea packaging and exporting company for Rs.1.6 billion for which the company obtained a loan from the Hatton National Bank to make this purchase.

It was interesting to note that the ex-owner of Union Commodities was a known party to one of the Directors of Kotagala Plantations who is also a member of the Monetary Board of the Central Bank.

This company which made no income at all was said to have fallen in value when it was finally sold off in terms of land and building.

After about seven years with Kotagala Plantations, 85 per cent of the equity stake in the wholly owned subsidiary was disposed.

According to a stock exchange filing it was stated that in order to facilitate financial restructuring process of the company, it has on March 29, 2018 disposed 70 per cent of its equity stake comprising of 5.6 million ordinary shares and 15 per cent equity stake comprising 1.2 million ordinary shares of its wholly owned subsidiary Union Commodities (Pvt) Ltd (UNICOM) to the company’s parent company Consolidated Tea Plantations Ltd (CTPL) and to related party Agarapatana Plantations Ltd (APL) for a consideration of Rs.850 million and Rs.182 million, respectively.

The other interesting fact is that the Rs.182 million paid by Agrapatana Plantations for the 15 per cent to purchase this company is indicative of the fact that value of the company had dropped to Rs.1.2 billion. This clearly shows that unless the company was overpaid by about Rs.500 million in the first place when it was bought there were some monies that had not been accounted for in the transactions.

The once famed tea estate company has been in the doldrums for some time due to bad management, as alleged by parties that were involved in the running of its operations.

Kotagala Plantations had not paid the government lease rentals for three years from December 2013 to December 2016 that had amounted to a total of Rs.248 million.

Analysts note that the company could have easily settled this with the sale of timber under the forestry programme that the plantation was carrying out at the time.

But as a result of the non-payment of their dues the company was told that harvesting of timber and the purchase of oil palm seeds were not allowed by the government.

Moreover, analysts observed that had Kotagala Plantations planted the oil palm seeds the company would have been harvesting now and in 2016 to 2017 they could have easily made about Rs.1 billion from the sale of timber.

In addition it has been found that the company had even been unable to pay the workers their dues in the form of EPF/ETF payments and other bank loans, statutory dues but which is now being worked out and settled. Rs.400 million from the Cambodian operations was taken out for the re-payment of these dues by the company in 2017 and 2018.

Moreover, they have pointed out that the gearing ratio of the company has hiked during the last three years. The company is currently experiencing risks in the ability to operate as a going concern.

In reference to the audit report, the Plantation Industries Minister Navin Dissanayake was said to have told the company that they were currently “under scrutiny” during a meeting held about a year ago.

It is learnt that Kotagala Plantations’ decisions in a number of transactions in buying and selling assets were carried out with vested interests.

Kotagala Plantations CEO Mahen Madugalle when contacted by the Business Times refused to discuss the Cambodian operations stating “I cannot tell you anything.”

Fitch notes that Kotagala Plantations has around Rs.546 million of bank loan maturities due in FY2018. The company has benefitted from the bank’s willingness to restructure its borrowings in the past. However, principal repayments on its listed senior secured debenture will fall due in FY 2019, starting with Rs.250 million principal due in May 2018.

The rating factors in Kotagala’s weak liquidity, unsustainable leverage and limited medium term business prospects due to inherent weaknesses in its tea and rubber plantation businesses.

Now it is left to be seen how the company would turnaround its operations and what kind of measures the state authorities would take to discourage the decline of the country’s wealth and plantations.