How These Tea-Preneurs Are Redefining India's Chai Culture

With coffee bars mushrooming across the country, the Indian 'chai' culture has lost its sanctity. Realizing this gap, a number start-ups such as Chai Point, Chaayos, Chai break, Teabox, Tpot Café and others are hitting the ground to replace the 'tapris' with chic chai bars.

"My Mother taught me to make tea when I was very young. And ever since, I have always been particular about it,” says Nitin Saluja, Founder, Chaayos. An initiative by two techies Nitin Saluja and Raghav Verma, Chaayos (started in 2012) is catering to the segment of ‘meri wali chai’. While conducting their research, they found out that every Indian has their own set of preferences when it comes to the perfect cup of tea, ranging from ‘adrak wali chai’ to ‘kaadi hui chai” Their tagline ‘Experimenting with chai’ is simply a proclamation of their menu with offerings like ‘aam papad chai’ or the ‘rose cardamom chai’. “The tea based beverage business is a very large and is mostly untapped in any organized form. The ritual of chai lends itself to a high degree of habitual consumption, and unlike other food products, with little onset of product fatigue,” says Kiranbir Nag, Partner, Saama Capital. 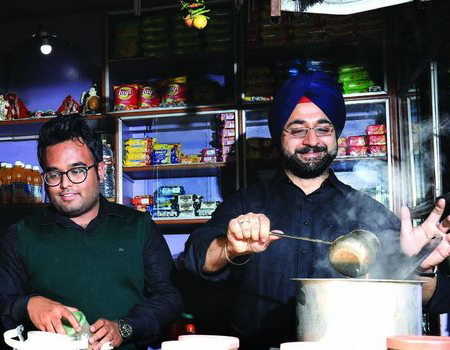 In India, the consumption of tea for medicinal and therapeutic purposes goes back to 500 BC. The industry flourished during the colonial rule, when the Britishers offered acres of land in Assam and Darjeeling to wealthy Europeans for cultivating tea. This was again exported to different European nations. Even, Indians acquired a tongue for tea with a hint of milk and sugar. Well known anthropologist and author Amitav Ghosh in his acclaimed book ‘River of Smoke’ writes how Indian opium traders in China gave birth to chai by mixing sugar, milk, ginger and garam masala to suit their palate. It is also a little known fact that the first Maoist attack in India was launched in Naxalbari, a small town near Darjeeling, by the tea labourers.

Today, India is the second largest producer of tea but it is less exportoriented. In the past few decades, many tea estates witnessed labour agitations and shut downs and major players enjoying the monopoly in the international market. Moving on the revival route, Kausshal Dugarr, Founder of a Ratan Tata backed brand, Teabox, chose to fill this void with a premium tea brand which vertically integrates sourcing, branding and distribution of tea. “We wanted to create a one stop shop where people can access the best tea directly from plantations through us," said Dugarr. To top it all, Teabox has also opened up an ‘experience store’ in Bengaluru last year where customers can sample various types of teas.

Additional Fortunes Along With a Cup of Tea

For a relatively simple product like chai, consumers are rapidly becoming more demanding of the standards around quality and convenience, and are quick to reward brands that are focused on these attributes.

“Initially, customers would walk up to us, just to say ‘thank you’. That simple appreciation with a satisfactory smile is what I have cherished,” says Amuleek Singh, Founder, Chai Point, which is by far the biggest player in the market with almost 100 stores across the country. Tea and the inception of the business might have happened by default, but during the course of their journey they embraced the brand with joy. Amuleek felt with coffee bars crowding the market, tea was losing its sheen.

“With Chai Point, we hoped to bridge that gap,” said Amuleek. Similarly, cashing on the ‘chai breaks’ culture, which often includes finger licking refreshments like matri, biscuits, samosas along with steaming cup of tea, Anirudh Poddar and Aditya Ladsaria conceived Chai Break. “We are one of the only few places which sell Thin Crust Pizza or Algio Olio with a cup of Kesar Chai,” says Poddar. Claiming to have received over 52 per cent of customer repeat rate and a turnover of Rs 1.5 crore, Chai Break aims at cross Rs 18 crore mark by March 2018.

“The addressable market for tea beverage is massive. I believe while the end product is relatively simple, the demand on the back end processes to deliver the quality, consistency, convenience are not trivial,” adds Nag saying that this Rs 5 lakh crore industry is estimated to grow 3x over the next five years.

Towards a Revoking Essence

The ritual of tea drinking is not new and has been well ingrained across India and many parts of the world for generations. Tea is cool again. Only, in its new avatar, the kadak chai and dunked biscuit has been replaced by boutique blends, handcrafted infusions, workshops and tasting session. The fact is, with Prime Minister endorsing himself as a chaiwala, chai is no more just a beverage but woven into the fabric of this nation.