How Much Caffeine Does Tea Have Compared with Coffee? 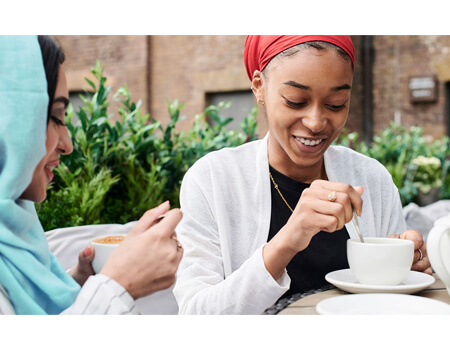 Caffeine’s popularity as a natural stimulant is unparalleled.

It’s found in over 60 plant species and enjoyed across the globe, especially in coffee, chocolate, and tea.

The caffeine content in a beverage varies depending on the ingredients and how the drink is prepared.

While caffeine is considered safe, drinking too much may raise some concerns.

This article compares the caffeine contents of a variety of teas and coffees and explores which drink you should choose.

Why is caffeine a concern?

An estimated 80% of the world’s population enjoys a caffeinated product daily.

Both the U.S. Department of Agriculture (USDA) and European Food Safety Authority (EFSA) define a safe caffeine intake as up to 400 mg per day, 200 mg per single dose, or 1.4 mg per pound (3 mg per kg) of body weight.

Due to its stimulating effects, caffeine has been linked to health benefits like enhanced alertness, improved athletic performance, elevated mood, and increased metabolism.

That said, consuming high amounts — such as single doses over 500 mg — may raise some concerns.

In large doses, caffeine has been associated with anxiety, restlessness, and difficulty sleeping. In addition, some studies suggest that drinking it regularly, even in moderate amounts, can cause chronic headaches and migraines.

Furthermore, caffeine is considered mildly addictive, and some people may be more susceptible to developing a dependence.

Caffeine is a popular stimulating compound found in many foods and drinks, including coffee and tea. It’s associated with many health benefits, but consuming too much of it may raise some concerns.

The amount of caffeine in tea or coffee can vary significantly depending on the origin, type, and preparation of the drink.

Tea leaves contain 3.5% caffeine, while coffee beans have 1.1–2.2%. However, the coffee brewing process uses hotter water, which extracts more of the caffeine from the beans. Typically, you also use more coffee beans than you’d use tea leaves for a drink.

Therefore, 1 cup (237 ml) of brewed coffee generally has more caffeine than a cup of tea.

Black, green, and white teas are prepared from leaves of the same plant, Camellia sinensis. What sets them apart is the time of harvest and level of oxidation of the leaves.

Black tea leaves are oxidized, while white and green tea leaves are not. This gives black tea a characteristic bold and sharp flavor and increases the extent to which caffeine from the leaves infuses hot water.

Matcha green tea is another high-caffeine tea. It usually comes in powdered form and packs 35 mg of caffeine per half-teaspoon (1-gram) serving.

Similarly, yerba mate, a tea traditionally enjoyed in South America that’s made by steeping the twigs and leaves of the Ilex paraguariensis plant, usually contains 85 mg of caffeine per cup (237 ml).

It’s also important to note that although herbal teas are marketed as caffeine-free, one mug of these may still deliver up to 12 mg of caffeine. That said, this is considered a negligible amount.

The preparation method greatly impacts the caffeine content of tea. Teas that steep for longer and in hotter water tend to produce a more potent cup.

For comparison, Stash Green Tea has 16 mg of caffeine after 1 minute of steeping under the same conditions. After 3 minutes of steeping, this more than doubles to 36 mg.

It’s a common belief that coffee made from dark-roasted beans has more caffeine than coffee from light-roasted beans. However, since caffeine isn’t affected much by roasting, this may not be the case.

That said, since dark roast coffees are less dense than light roast ones, you may use greater amounts of beans or grounds when brewing this type, yielding more caffeine per cup.

Espresso is a more concentrated source of caffeine.

For example, a “single” espresso from Starbucks has about 58 mg of caffeine per 1-ounce (30-ml) shot. Most specialty coffee drinks, such as lattes and cappuccinos, are made with a double shot of espresso, containing 116 mg of caffeine.

Among decaffeinated beverages, decaf espresso tends to have the most caffeine with 3–16 mg per 16-ounce (473-ml) serving, whereas decaf coffee typically provides less than 3 mg per 8-ounce (237-ml) cup. Decaffeinated teas fall in between these two types of coffee.

Hotter water draws more caffeine out of tea leaves, and the same holds for coffee. Coffee is typically brewed hotter than tea at an ideal temperature of 195–205°F (90–96°C).

You can also make cold-brewed coffee by soaking ground coffee in cold, filtered water for 8–24 hours. As you use 1.5 times more ground coffee using this method compared with regular hot-water brewing, it may result in a more caffeinated cup.

The caffeine content can vary greatly depending on the type and preparation of tea and coffee. Black teas and espresso coffee pack the most in both categories, while herbal teas and decafs have only scant amounts.

Which one should you drink?

Caffeine acts quickly — usually within 20 minutes to 1 hour of consumption.

If you’re sensitive to the effects of caffeine, consider sticking to teas lower in caffeine like white or herbal teas. You may also brew high-caffeine teas for a shorter time, such as 1 minute instead of 3.

Opting for decaffeinated tea, coffee, and espresso is also a good way to enjoy these drinks without much caffeine.

On the contrary, if you’re a fan of high-caffeine drinks, you may enjoy espresso, cold-brew coffee, and teas with higher caffeine contents, including green and black varieties.

To stay within safe amounts, drink no more than 400 mg daily, or 200 mg of caffeine at a time. This translates to no more than three to five 8-ounce (237 ml) cups of regular coffee daily, or eight 1-ounce (30-ml) shots of espresso.

Those who have heart disease, are prone to migraines, and take certain medications should limit their caffeine intake.

Women who are pregnant or breastfeeding should also stick to no more than 200 mg per day. This is about one 12-ounce (355-ml) cup of coffee or up to four 8-ounce (237-ml) mugs of long-brewed black tea.

If you’re concerned about your caffeine intake, look for white or herbal tea and decaf coffee. If you enjoy caffeine, keep your intake to less than 400 mg or 4 cups of coffee daily and aim for no more than 200 mg of caffeine at once.

How you prepare your tea and coffee affects their caffeine contents.

While black tea, espresso, and coffee bring the most caffeine to the table, green tea packs a moderate amount as well. The content in white teas varies greatly, while herbal teas are practically caffeine-free.

If you’d like to cut back on caffeine, try steeping your tea for less time, and opt for decaffeinated versions of your favorite coffee- and espresso-based drinks.

However, if you enjoy the effects of caffeine, aim to not consume more than 400 mg per day.