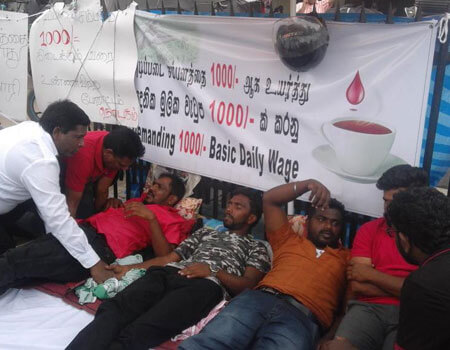 The fast campaign launched by four youth in Colombo Fort demanding a daily wage of Rs. 1000 for all estate workers was called off today conditionally due to their worsening health conditions.

The youths, who launched the continuous fast campaign earlier this month, have been hospitalized today. The government, however, has come under pressure to intervene expeditiously in offering a solution to their demands.

Protests are taking place on a daily basis, not only in the estate areas, but also in the North and East, showing solidarity with the striking workers demanding a fixed daily wage of Rs. 1000.

Apart from the estate areas in the hill country, protests and public demonstrations were held in Jaffna, Batticaloa and Killinochchi to show solidarity with the protesting workers.

The estate workers unions launched a continuous strike on December 04 demanding a speedy solution to their demands and they still have not elicited a positive response from the authorities.

Representatives from plantation companies, during discussions held with the estate workers unions earlier this month, agreed to increase the current basic daily wage of Rs. 530 to Rs. 600.

Senior Vice President of Ceylon Workers Congress S Arulsami told media that the companies also agreed to increase the pay up to Rs. 1000 with allowances.

However, the trade unions are determined to continue with the strike until the companies give in to the demand of a fixed daily wage of Rs. 1000.

As a result of the protest, however, the tea industry, a key component of Sri Lanka’s economy, has come to a standstill posing a grave threat to the economy.

The umbrella organisation of the regional plantation companies (RPCs), the Planters’ Association of Ceylon (PA), addressing a press conference last week, cautioned that this year’s tea output would fall below 300 million kilos while the tea export income would fall below US $ 1.5 billion, due to the ongoing estate workers’ strike.S

Sri Lanka, they said, was earlier targeting a tea output of 320 million kilos and over US $ 1.5 billion in export income this year.