From Honey to Duct Tape: The Home Health Remedies That Science Has Proven to Work

There are few worse experiences in life than sitting in a GP waiting room, watching endless reruns of Jeremy Kyle (muted, of course), praying for the buzz of your name to whisk you away from the hellscape of other glum-looking patients and their potentially contagious problems. 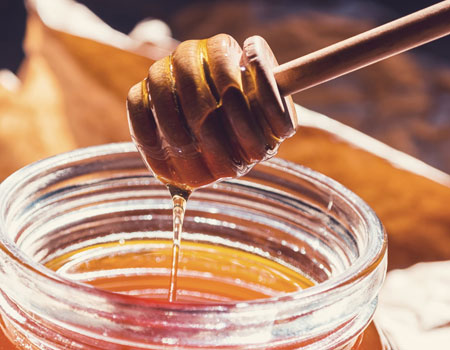 Whilst many of us would prefer to not have to spend our time at the local doctor’s surgery, it’s inevitable that at some point or another, our bodies will get the better of us – be it warts or the flu.

But are all our visits warranted? Could they be treated in the comfort of our own home, cutting out the middleman entirely?

Earlier in the year, NHS England issued a plea to the public to take their children to a pharmacist before consulting a GP. And now, new guidance from the NHS suggests we should try honey for coughs and colds before visiting a healthcare professional.

Further figures show that 18 million GP appointments and 2.1 million A&E visits could have been treated at home.

Which raises the question: what other homemade health hacks could we use to treat minor ailments? And how can we parse effective remedy from old wives' tale?

Mint tea for an upset stomach

Feeling a little bunged up or bloated? You might find some comfort in mint tea, often heralded for its soothing effect. The herb has some big health claims: it's often said to help ease indigestion, irritable bowel syndrome, or lower gut pain,

And science shows that there's truth in the tea leaves. Dr Jet Khasriya, an NHS-registered and private GP for GPDQ, the UK’s first doctor-on-demand app, says: "Mint is made up of an organic compound called menthol which, amongst other things, is an antispasmodic for smooth muscle. In this way, it can calm the wall of the gut and prevent the cramps and air trapping you get when your tummy is upset. Menthol is also used for topical pain relief and has anti-itch properties."

If you’re suffering from the frustrating and often agonising symptoms of joint pain, turmeric may be your friend. Several studies have shown its anti-inflammatory properties and even its ability to modify immune system responses. Whilst it’s not a cure, it can help prevent joint inflammation. A 2010 clinical trial found that the turmeric supplement Meriva provided long-term improvement in pain and function in 100 patients with knee osteoarthritis.

Dr Khasriya says: "Turmeric (or ‘Haldi’ as it’s known to Indians) contains curcumin which is a naturally produced bright yellow chemical compound. It has proven antioxidant and anti-inflammatory abilities, although the science is in its early stages of testing. People have used it for healthier lifestyles and for joint pains.’

In fact, one 2012 pilot study found that a curcumin called BCM-95 reduced swelling and pain for patients with rheumatoid arthritis than nonsteroidal anti-inflammatory drug (NSAID).

What’s a road trip without a little car sickness along the way? For bookworms, never were there greater consequences than the queasy side effects of having your head in a book whilst being simultaneously catapulted at 70mph on a motorway. Head forward, look at the horizon, suck on some ginger, came the advice.

In 2003 a study conducted by the National Yang-Ming University in Taiwan saw that in thirteen subjects with a history of motion sickness, a pre-treatment of ginger saw their nausea go down when exposed to circular movement. It also prolonged the onset of nausea and increased the recovery time.

"Ginger is an ancient herb that contains many volatile oils which give it its characteristically pungent smell," explains Dr Khasriya. "There is clinical evidence that it is an effective treatment for nausea and completely safe in pregnancy."

As homemade medicines go, ginger seems to be a winner.

Hot water and honey for a tickly cough

This widely used method, often prescribed by GPs themselves, works. Today, NICE and PHE proposed new guidelines recommending the use of honey for a cough and common cold before visiting the GP.

"Surprisingly, hot water and honey are just as effective (if not more effective) as most over the counter cough remedies," says Dr Khasriya. "The reasons are largely unknown but it might be for the same reason that glycerin (a major ingredient in cough mixtures) works: it could be coating the upper airway, thereby reducing its irritation and thus dulling the cough reflex."

Unfortunately for hot toddy advocates, there is no evidence that adding whiskey ups the potion's medicinal benefits.

A particularly tricky issue for those with young children trying to navigate the whirlpool of swimming lessons. If you’re tired of endlessly wrestling with latex socks and tiny feet, try wrapping them up in duct tape instead.

"Duct tape occlusion therapy has actual clinical trials behind it showing that it is significantly better than cryotherapy (freezing). We’re uncertain how it works but theories include local stimulation of the immune system or keratolytic mechanisms (breaking down the surface of the wart)," explains Dr Khasriya.

To get to the crux of the problem, cut a piece of tape, a similar size to the verruca or wart and leave it on there for seven days, replacing it if it falls off.

Perhaps not the most practical of methods when out and about, but having a salt sachet and warm water will get rid of that sore throat. The salt passes through membranes in your throat and creates an inhospitable environment for bacteria.

Dr Khasriya says gargling has a double effect. "Saltwater or sodium chloride destroys the cell walls of the troublesome bacteria through osmotic pressure and also creates an alkaline environment which makes it difficult for bacteria to thrive. It also acts as a local anti-inflammatory for the lining of your throat."

Pills, oils, sprays… Lavender is a booming market, with many purchasing it for its calming and tranquil properties. But is there any truth to it?

"Get ready to be amazed because this is not an old wives’ tale," says Dr Khasriya. "Lavender has been observed in laboratories at a cellular level to interact with receptors in the central nervous system which control aspects of all these problems. It has amazingly shown antidepressant properties and is completely safe to use day to day."

And the ones to avoid…

It’s the night before a big interview or your wedding day, or that school reunion you’ve been dreading and lo and behold you end up with a zinger of a spot. As the rumour goes, pop a little toothpaste on it and by morning it’ll be gone – right?

Wrong. "This is a contentious,’ says Dr Khasriya. "No doubt you have a friend who has told you it worked for them. True, some toothpaste contains Triclosan which is antibacterial. They also contain Sodium Bicarbonate (baking soda) and alcohol which might dry out areas of your skin and act as an anti-inflammatory, making it appear that you have cured the spot. In reality, you have just patched it up.

"Be warned: some whitening toothpaste contains ingredients which could irritate the skin further.’

Tea bag on a stye

While styes are certainly irritating, popping a warm tea bag on the area may not be the most productive way to go. "There is no evidence that the compounds in tea help with styes or eye infections," says Dr Khasriya. "The heat from the tea bag is more likely the factor at work here, giving pain relief and having a clarifying effect on the sebaceous exocrine gland of the eye."

The NHS advises a hot compress and painkillers such as paracetamol or ibuprofen.

Tilting your head back when you get a nosebleed

Not so much a home remedy as bad advice. "This is absolutely the wrong thing to do," insists Dr Khasriya. "Tilting your head back can lead you to choke on the blood from your nosebleed. This blood can also irritate the stomach if swallowed."

Instead, Dr Khasriya says you should lean forward and if possible exert a little pressure over the bridge of your nose (although this may not work as the bleed could be coming from a different part of the nose).

Hair of the Dog

We hardly need to say it but this notorious advice doesn’t quite cut it when suffering the demise of a nights drinking.

"There is currently no evidence that consuming alcohol the morning after the night before cures your hangover," says Dr Khasriya.

"What you are more likely doing is extending your alcoholic binge only for a crash at a later stage. Like it or not, you have to bite the bullet and stop drinking and when you do, the best remedies are hydration, pain relief and rest."