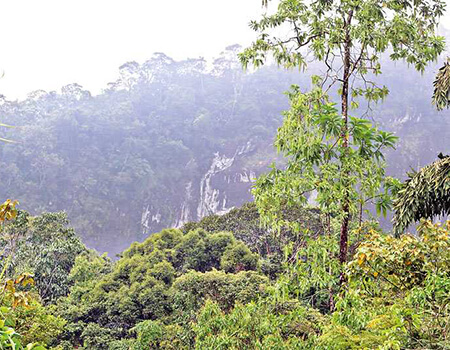 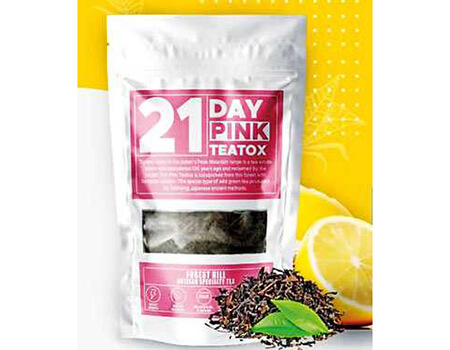 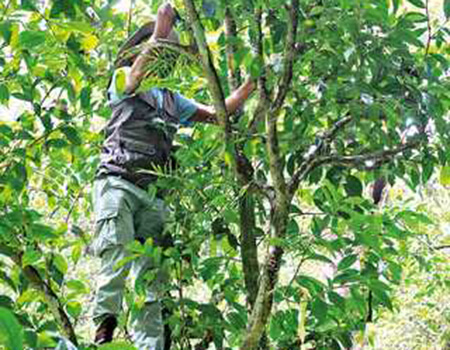 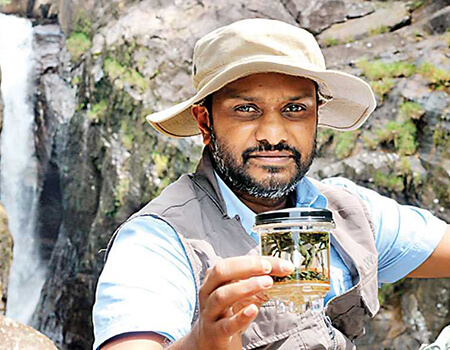 Ceylon Pink TeaTox, a pioneering artisanal wild tea, made with a rare variety of tea leaves plucked from the highland forests, has been launched in the local market, giving consumers an opportunity to enjoy a unique cup of tea from the wild.

Forest Hill Artisanal Tea Founder Buddhika Dissanayake, who produces this speciality – Ceylon Pink Tea or Pink TeaTox, says that this unique tea, can stand its own with other artisanal teas of the world.

He extolls Ceylon Pink Tea’s signature flavour, therapeutic and health benefits – including weight loss, as the main features that make this tea, one of a kind. The tea has a sweet/vegetal note. A dash of citrus turns the brew to a rosy hue. Hence, the name.

The making of Ceylon Pink Tea

Fast forward to a different kind of tea experience. Here, the leaves are plucked from a land adjacent to the majestic Adam’s Peak, in southwestern Sri Lanka, where tea pluckers ascend tea trees, grown to astounding heights of 30 to 40 feet, to pluck two pink leaves and a bud!

According to Buddhika, this is the source for this wild artisanal tea, known as Ceylon Pink Tea or TeaTox. Although new to locals, the quality of this product and the many attributes it claims, has already been tested, tried and endorsed by the artisanal tea enamoured- market.

Forest Hill Artisanal Tea, was exported to over 20 countries, with seven key buyers in the Netherlands, Spain, United Kingdom, Australia, New Zealand, Hong Kong and United States, prior to the COVID-19 pandemic thwarting exports, he said.

A former planter with over 15 years’ experience in the tea industry, Buddhika has been experimenting with the highly-skilled art of artisanal handmade teas, for the last five years, in addition to working with local farmers on producing sustainable, organic tea.

Keen to move away from the orthodox mass tea production, Buddhika had explored the possibilities of developing unique handmade teas. “It is a niche market, but a growing one and based on this decision, I purchased a plot of land and worked with a group of 15-20 local farmers to set up our enterprise,” he reveals.

It was during this time, that he discovered the wild tea trees. An ardent “climber” – given his love for nature and the outdoors, he spotted the tea trees quite by chance, amongst the other forest flora during one of his climbing expeditions.

Intrigued, he headed to investigate, and found a sprawling 100-acre tea land that had been planted during colonial times, but had been abandoned (records suggesting around 130 years ago), and completely reclaimed by the forest.

Nurtured by nature, the tea bushes had grown uninterrupted, benefiting from the forest’s springs, fresh air, and most importantly, the carbon and nutrient rich soils. The root structures of the “tea trees” had also grown in abundance, unlike normal tea bushes, enabling for more nutrients and high mineral absorption. Buddhika believes that these are all significant factors, which have contributed towards the distinctive, rich quality of the Ceylon Pink Tea.

Cost of a cup of Pink Tea

However, artisanal tea, caters to a niche market. Given its high-end tea status, a cuppa from these leaves does not come cheap. 32-grams are priced at around Rs. 5,000 for the international market. Production predictions are based on the natural process and currently is around 250 kg per month. “Orthodox methods of mass scale tea production are not applied for artisanal teas, which is a specialised art. It is a very detailed and painstaking process,” he said.

In addition, given the company’s sustainability ethos championed by the team, the entire process is closely monitored – starting from harvesting leaves to the production, packaging and sales.

The micro tea factory, approved by the Ceylon Tea Board is situated 10 kilometres away from the forest. Trained farmers and tea pluckers, harvest the high quality leaves atop the tea trees. The leaves are then placed on a loft – with the natural wind flow of the Adam’s Peak aiding in the withering process.

After which, the leaves are sent to the rolling rooms, where a team of trained tea artisanal-community women, roll the leaves and place them for oxidation. A specialised baking oven has been further manufactured for this process.

Buddhika and team have put in place a “plucking pattern” with a tea tree numbering system. Leaves from the forest tea trees are plucked at 7-10 day intervals, and stringently monitored through a tree roster.

This is to ensure sustainable harvesting from each tree and minimum impact to the biodiversity of this forest-claimed estate. The team also abstain from removing the natural moss and fern from the tea trees, or other plant species, in a bid to maintain and respect the ecological balance, and the distinctive flavour, which they feel comes into play as a result.

According to Communications and Relationships Manager Damien Hoffman, despite the unstinted support of the Ceylon Tea Board, the University of Sabaragamuwa (Agricultural Faculty) and the Tea Research Institute of Ratnapura, which assisted in conducting tea trials, the two pestering waves of the COVID-19 pandemic have had an adverse impact on the Ceylon Pink Tea exports.

“The demand was good from the overseas market prior to COVID-19, although it was a niche market segment. We were optimistic of further expansion. Unfortunately, the pandemic posed unforeseen challenges, and we had to rethink all our strategies,” he said.

The company had envisioned enhancing the expertise of their Tea Academy team, developing local youth interested in this much specialised area of artisanal teas, and incorporating new features for their wild tea tourism tours.

Previously, Buddhika and his team had also organised two to three nights’ stays for tourists, and even provided opportunities for internships. Several undergraduates had expressed interest in honing their skills and were registered with the company as well, he said. These included foreign students from Russia.

“Unfortunately, we’ve had to put these plans on hold due to COVID.” However, he reiterates that they are optimistic that with the support of the local market, the company will be able to sustain operations and the livelihoods of the communities dependent on the business, to some extent.

We had to pivot and adapt a new pricing structure to cater to the local consumers, but the quality of the product remains the same, as does the experience and the health benefits of drinking Ceylon Pink TeaTox, he affirmed.

A special introductory rate of Rs. 1,950 (32 grams) is being offered to give locals a taste of this brew, available in a packed version, containing leaves for 21 days.