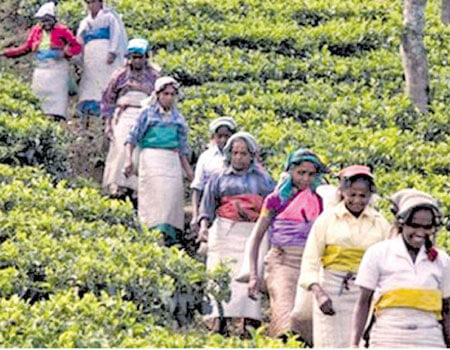 The ongoing simmering estate wage crisis was gridlocked yesterday with both the Planters Association and the estate unions unwilling to compromise on their earlier positions.

This was amid the backdrop of the estate unions beginning what it called an indefinite strike until the payment of Rs. 1000 per day wage was delivered to them.

The Planters Association was adamant that the maximum they could give was Rs. 940 per day and that too which they could barely afford, but estate unions were adamant that the workers were determined on the Rs. 1000 daily wage they insisted from Day 1.

We have promised them Rs. 940 per day, which we could barely afford, which will cost the RPCs an additional Rs. 6.3 billion and another Rs. 5 billion in EPF and other emoluments, a top PA spokesman told Daily News Business yesterday amid the upcountry Regional Plantation Companies employees striking work from yesterday.

There was 100% attendance of RPC workers in the low country plantation areas, he assured.

These workers would also realize their folly when they don’t get paid while striking work and they are bound to return to work today (5) or tomorrow (6), he said.

He also drew the attention of the estate unions led by the CWC to the backdrop of the dwindling global tea and rubber prices as of now asked from the estate unions how they were able to pay Rs. 1000 per day in that type of export market backdrop. This, he said, was also within a dangerous backdrop of the possibility of Sri Lanka’s tea buying countries shifting to competing markets such as Kenya, India and Indonesia.

Meanwhile CWC Vice President Arul Samy who was with the striking workers at the time he was contacted by Daily News Business for comment, asserted that the strike was very successful and that the workers were adamant that they will continue till the Rs. 1000 per day was paid to them.

“We have insisted that the minimum daily wage should be Rs. 1000 and the productivity and attendance bonuses could be added to that,” he said.

Responding to a question as to what the reaction of the unions was to the Planters’ Association Offer of the Productivity Bonus which enabled an estate worker to get Rs. 1800 per day or more, he asserted that he was yet to see the proposal!