EDB 2020 export target in quandary due to COVID-19 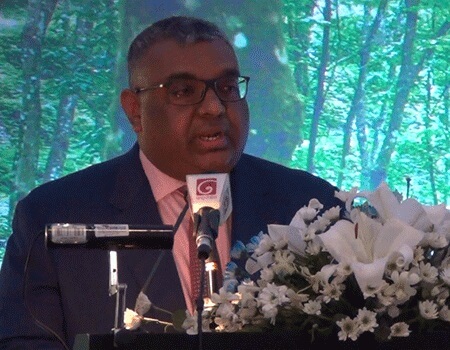 Due to the ramifications felt by the supply chains of the dominant export sectors of Sri Lanka from COVID-19, achieving the EDB’s anticipated export target of US$ 18.5 billion during this year is in quandary, according to EDB Chairman Prabhash Subasinghe. “The export target of US$ 18.5 billion set for 2020 will be difficult to achieve. Sri Lanka’s single largest export market is the USA which accounted for 27 % of total merchandise exports last year. However, European Union accounted for 30%. Consumers in Europe and in the near future those in the USA too may reduce consumption of items and the demand for imported goods will be low”, Subasinghe noted.

Subasinghe predicted a drop of 25% in exports during the second quarter due to the outbreak. “Our largest neighbour India has cut its economic growth forecast to 5.4% for 2020 from the earlier estimation of 6.6% for 2020 and 6.7% to 5.8% for 2021. Sri Lanka’s exports was US$ 16.14 Billion in 2019 and it is predicted that the drop in exports could be as much as 25% in the next quarter, resulting in a reduction of US$ 750 million in merchandize exports in the second quarter of 2020, which will be a great blow to the economy of the country”, he said. Explaining the constraints faced by the supply chains of export industries, Subasinghe pointed out that a wide range of imports, including fabric, cotton, machinery and appliances, iron, steel, and plastics, etc. are likely to be affected due to shipment delays as a result of factory closures and transport restrictions in China. Sri Lanka’s top five export industries – Apparel, Tea, Rubber, Coconut and Processed Food – are facing setbacks due to this global epidemic.

“As informed by apparel industrialists, their supply chain is hampered due to slowdown of fabric, accessories production in China and many shipping lines avoiding ports in China. Sri Lankan factories have started reducing work times and contemplating shutting down their production facilities until China resumes operations. Currently most manufacturers are in search of other sources of supply for raw materials and accessories, but such sources, including even India, are not price competitive”, he added illustrating the consequences felt by the country’s largest export earner. EDB Chief further stated that tea importing countries such as China, Hong Kong, and Korea, had slowed down on their purchases while predicting that the shipments to Iran – the fourth largest market of Ceylon Tea in 2019 – could also be affected due to the spread of the virus.

“China is a major market for Sri Lankan coconut fibre. Due to the outbreak, Chinese factories have reduced their production of value added products, and Sri Lankan fibre millers are holding heavy stocks. If this situation remains, it is likely to burden the fibre millers further and deprive thousands of people of employment”, EDB Chief mentioned. Subasinghe also projected difficult times ahead for the tyre industry, as the major raw materials of the tyre industry such as chemicals, nylon cords, moulds, tyre building and other accessories are mostly sourced from China.

As per Subasinghe, seafood exports had declined by 35% last week and it is expected to drop by 25% over the next quarter owing to the outbreak of the virus in Italy, which is Sri Lanka’s largest market for seafood in Europe. “Other export sectors such as food & beverages, boat & ship building, pharmaceutical, gems & jewellery, electronic & electrical products, printing, ICT/BPM and the logistic sector are also badly affected”, he noted.