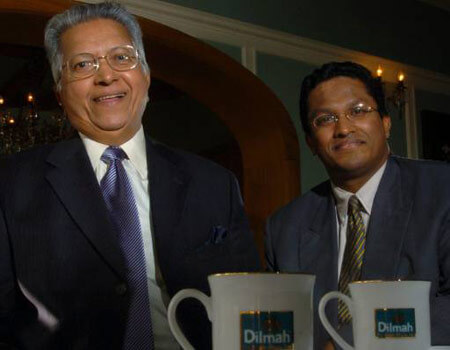 Supporting the underprivileged and operating ethically have been at the centre of Dilmah founder Merrill Fernando's philosophy over his long career.

Fernando, the man well known for his "Do try it" slogan, founded tea company Dilmah in Sri Lanka in 1988. It is now one of the world's largest tea brands and is well known in New Zealand.

Fernando, 89, was awarded an honorary doctor of science degree by Massey University at its graduation ceremony on Friday in Palmerston North in recognition of his leadership in ethical business in the food and beverage industry.

He has been recognised for his contribution to the tea industry and food science globally, and he has been praised for the company's fair trade practices.

"I have a group of companies and we contribute 15 per cent of the company's profits before tax to charitable foundations. That is spent on the poor and ill-privileged to make a better world and for me to feel that when I go I have left a better world."

Fernando said he had shared his success with people who needed it and the more he gave, the more he received. His philosophy was he couldn't take money to the grave.

"Plantation workers who were exploited during the colonial era, I am bringing them hope and a future for their families through the foundation, which has educational programmes."

The educational programme has produced doctors, lawyers and other professions.

Fernando started working with Massey's Riddet Institute, a food and nutrition research centre, in the 1990s and worked with distinguished professor Paul Moughan. Fernando has researched the antioxidant and health properties of Dilmah tea.

Moughan said Massey honoured Fernando because of his contribution to science through funding and his personal interest.

"He came and met the students doing the work and it's not common for someone of his status to take such an interest. The other reason is because of his wonderful business philanthropy.

"Merrill used the words 'fair trade' and 'ethical business' years and years before anybody talked about it."

Fernando is just the fourth international recipient of a Massey honorary doctorate.

Massey has announced a scholarship for Dilmah employees or their family members to undertake professional development or degree study.

Dilmah's range of 2267 products is now carbon neutral and the company is also heavily involved in conservation in Sri Lanka.