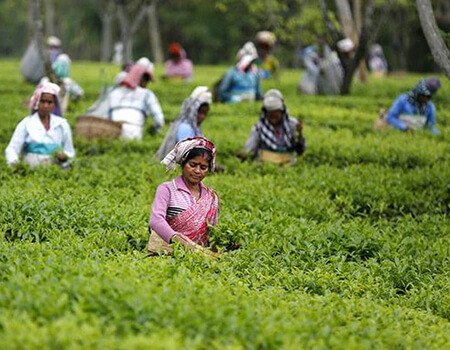 Workers vulnerable as they don’t have safety gear such as masks, gloves

The Assam Tea Tribe Students’ Association (ATTSA) has demanded the closure of all estates till March 31 in view of the COVID-19 outbreak.

Apart from keeping the plantation workers indoors, the association has asked Labour and Tea Tribes’ Welfare Minister Sanjoy Kishan to ensure preventive measures for keeping COVID-19 away from the plantations.

The workers are referred to as ‘tea tribe’ though they are not among Assam’s Scheduled Tribes and prefer to be called Adivasis comprising 106 sub-groups. They comprise about 18% of Assam’s population of more than 3 crore with 1.1 lakh employed in 803 registered estates.

An unspecified number of Adivasis are employed in at least 65,000 small tea gardens, so classified for plantations covering 100 bighas (33.06 acres) or less.

“We are highly concerned about the grave threat to the tea garden workers. They pluck tea leaves within a distance of one foot and it will be risky for them if the virus attacks through infected people who have returned or are returning from jobs elsewhere in the country,” ATTSA president Dhiraj Gowala said.

He said the workers are vulnerable as they don’t have safety gear such as masks, gloves and sanitisers. “The government should shut down the tea gardens since schools, colleges and other public facilities have been closed till March 31.”

Abhijit Sharma, secretary of the Assam Branch Indian Tea Association, said March-April is peak plucking season but he is not authorised to comment on how any move to suspend plucking and processing of tea leaves would impact the industry.

“We cannot be indifferent to what is happening to the world beyond. We have been taking necessary precautions and conducting awareness drives on precautionary measures,” he said.