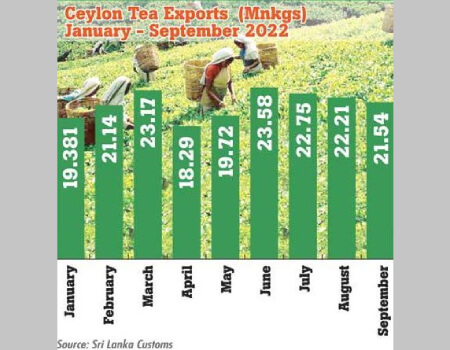 Sri Lanka exported a total of 21.54 MnKgs of tea for the month of September, a 1.88 MnKg decrease when compared with the corresponding period in 2021.

Cumulative analysis shows that for the January to September 2022 period exports totalled 192.60 MnKgs. The total quantities exported so far for the first nine months of the year is 9 percent lower than the total exports recorded for the corresponding period in 2021.

Here again, all categories have witnessed a decline in comparison with the corresponding period of 2021, highlighted Forbes and Walker Tea Brokers in its analysis.

Iraq has remained the largest importer of Ceylon Tea for the first nine months of 2022 ending September. Exports to that country expanded by 25 percent Year-on-Year (YoY). Russia ranks as the second largest market for Sri Lanka’s tea exports, procuring a total of 17.80 MnKgs. Despite its position, imports of Ceylon Tea to the Federation contracted by 12 percent when compared with January - September 2021 period.

Coming third is the Unite Arab Emirates, importing a total of 16.71 MnKgs of tea from Sri Lanka.

Other notable markets for Ceylon Tea include Türkiye, Iran, Libya and Azerbaijan for the period January-September 2022.