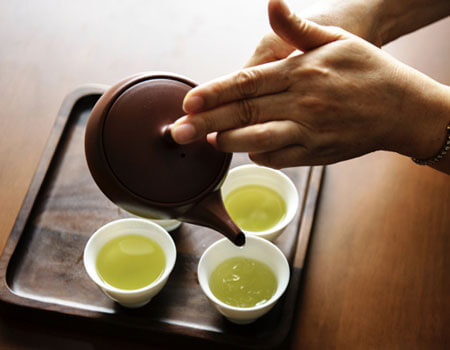 Tea consumption is associated with a reduced risk of heart disease, stroke, and premature death in general, with each additional cup of green tea a day associated with a 4 percent lower mortality risk. So, perhaps “drinking several cups of tea daily can keep the doctor away,” as well as the mortician—but what about cancer?

There is “growing evidence from laboratory, epidemiologic [population], and human intervention studies that tea can exert beneficial disease-preventive effects” and, further, may actually “slow cancer progression.” Let’s review some of that evidence.

Not only do those who drink a lot of tea appear to live longer than those who drink less, drinking lots of tea may also delay the onset of cancer. At 0:56 in my video below, you can see a table titled “Average age at cancer onset and daily green tea consumption.” The green tea intake is measured in Japanese tea cups, which only contain a half a cup, so the highest category in the table is actually greater than or equal to five full cups of tea, not ten as it appears in the table. Women who did get cancer appeared to get it seven years later if they had been drinking lots of tea compared to those who had consumed less. Men, however, had a three-year delay in cancer onset if they had consumed more than five full cups of green tea daily, the difference potentially “due to higher tobacco consumption by males.”

Green tea may be able to interfere with each of the stages of cancer formation: the initiation of the first cancer cell, promotion into a tumor, and then subsequent progression and spread, as you can see at 1:24 in my video. Cancer is often initiated when a free radical oxidizes our DNA, causing a mutation, but, as you can see at 1:44 in my video, we can get a nice “spike of antioxidant power” of our bloodstream within 40 minutes of drinking green tea. “This increase may, in turn, lower oxidative damage to DNA and so decrease risk of cancer.”

There is a DNA-repair enzyme in our body called OGG1. Wthin one hour of drinking a single cup of green tea, we can boost OGG1’s activity, and after a week of tea drinking, we can boost it even higher. So, “regular intake of green tea has additional benefits in the prevention and/or repair of DNA damage.” In fact, tea is so DNA-protective it can be used for sperm storage for fresh samples until they can be properly refrigerated.

What’s more, tea is so anti-inflammatory it can be used for pain control as a mouthwash after wisdom tooth surgery, as you can see at 2:41 in my video. In terms of controlling cancer growth, at a dose of green tea compounds that would make it into our organs after drinking six cups of tea, it can cause cancer cells to commit suicide—apoptosis (programmed cell death)—while leaving normal cells alone. There are a number of chemotherapy agents that can kill cancer through brute force, but that can make normal cells vulnerable, too. So, “[g]reen tea appears to be potentially an ideal agent for [cancer] prevention”: little or no adverse side-effects, efficacious for multiple cancers at achievable dose levels, and able to be taken orally.