By the lake in ‘Little England’ 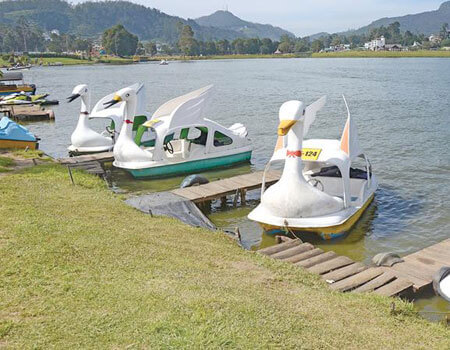 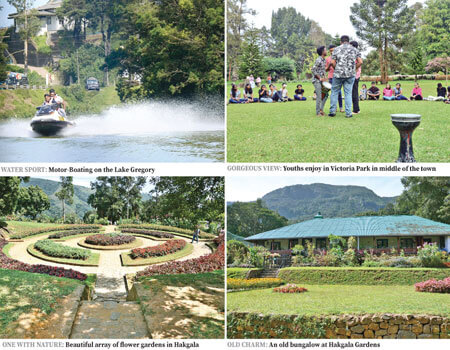 Rent a cycle and pedal around or just soak in the calm of the hills at 2,000 metres above sea level, Nuwara Eliya known as ‘Little England’ provides travellers a cool Christmas break

Having explored the different facets of the Maskeliya and Hatton towns in central highlands in last week, we decide to widen our radius of exploration by travelling north – east into the NuwaraEliya. It is December and the weather is perfect to travel to NuwaraEliya, about 40 kilometres east of Hatton.

The highlight of the winding route is the spectacular Hatton –NuwaraEliya Road that connects the cool town with a view of bungalows, hotels, post office, garden and golf course which gives a distance British countryside feels to NuwaraEliya. The misty hill town was accidently discovered by a Briton who found the climate here similar to England. The stunning red post office building stands out among all the landmarks of the beautiful town.

NuwaraEliya is the highest city in Sri Lanka and nestles just below the tallest peak in the country, Pidurutalagala (Mount Pedro) at 2,555 metres. The average year round temperature is 18 degrees centigrade. This misty city, surrounded by forests, tea plantations, botanical gardens, waterfalls and English flower and vegetable gardens has today become a magnet for tourists. In fact, NuwaraEliya provides the perfect place to cool down and chill out.

As we swelter under the merciless heat wave, nobody wants to get baked on the beach or the streets of touristy places during the vacation. The time is just perfect to plan a trip to the hills, where you can bask in the crisp sun during the day and feel the chill in the nights.

With clouds hovering over NuwaraEliya, the princess of hill stations is experiencing an18 degrees Celsius temperature. There can’t be a better time to this cool and calm destination.

The weather is ideal for walking or cycling around Gregory Park in shorts and T-shirts, says the venders. And there is no better path than the five kilometres that skirts the 190 years-old, artificially-built Lake Gregory. It is the most beautiful and expressive feature of NuwaraEliya. There are many ways of doing the lake. Simply walk around it. Or, hire motor-boats or pedal Swan like boats at the lake and go boating at least for an hour to relax and there are also motorboats for sightseeing.

On sunny days, when gentle breeze brushes against your cheeks, a simple bicycle ride is a fulfilling experience. Stick to the paved path that takes you past several snack kiosks which offer crispy fried potatoes and wired sausages buns. The beautiful nursery hidden under a canopy of trees, the resorts with a beautiful play park for children. Enjoy a plate of hot fried-rice in a small kiosk by viewing the activities of the lake. While horse racing attracts locals, visitors can hire a pony ride around lake. Vendors in marksheft stalls sell sweaters to ward off the chill when the temperature drops at night and street stalls sell foods such as hot dogs, ice cream, and beer and there are barbecue counters as well as Indian and Chinese restaurants doing booming business.

In spite of its development with newly built hotels and apartments in recent years, the surrounding areas of the lake have managed to preserve its green appeal. Now it has well-mown lawns where visitors sit on the grass in the sunshine, artistic topiary and herbaceous borders.

If you are in NuwaraEliya, never miss a trip to the Hakgala Botanical Gardens, which is around 10 kilometres outside town. It was established in 1860 as an experimental garden to grow cinchona trees, from which the anti-malaria drug quinine is derived. Over the years it was expanded to include trees and flowers from around the world.

The sheer rock of Hakgala (‘Jaw Rock’) which rises 1,500 feet straight up above the gardens is said to have been carried here from the Himalayas in the jaws of Hanuman, the mythical monkey King Rawana in the Ramayana epic.

Among other prominent location and landmark in NuwaraEliya is the Victoria Park established in 1897 and named of the Queen Victoria of Great Britain which was our final visit. It is situated in the middle of town, is a lovely place for a stroll or a picnic. You will find Victoria Park filled with flowers and shrubs that bloom all year round. Other interesting places in the city may be Golf course and Race Course grounds.

Early colonial administrators and visitors in those days were offered an escape from the tropical humidity of the low lands, spending Christmas in a climate that was more similar to that of London.

Christmas is still celebrated according to old-fashioned British traditions in the once elegant colonial hotels in NuwaraEliya. Tall and richly decorated Christmas trees can be found in most of the major establishments and Christmas carols fill the churches and hotels during the month of December.

However, August 11 of this year marked the 190th anniversary of the establishment of the NuwaraEliya town. The town is originally dated back to August 11, 1828, when the British colonial Governor of Ceylon, Sir Edward Barnes established a cool rest area in NuwaraEliya for British troops.

Months of December and January in NuwaraEliya is a trip definitely worth considering. But NuwaraEliya is definitely a place to chill out. So this new year why not plan a trip to the highlands and have a cool Merry Christmas and a Nippy New Year!