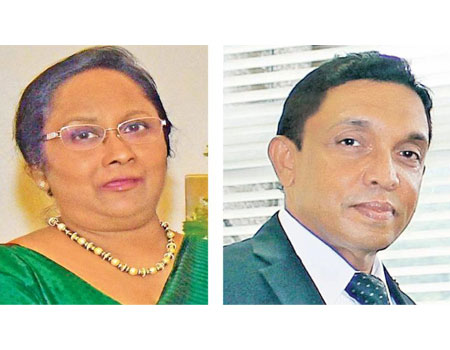 Economists, Chamber heads and top business personalities commended the 2019 Budget as a progressive one, with a focus on promoting women entrepreneurship and creating an entrepreneurship culture in the country. The move to further liberalise the economy, drive exports and create a conducive environment for foreign direct investments were also commended by the business community.

Chairperson Women’s Chamber of Industry and Commerce Chathuri Ranasinghe said the 2019 Budget is a women entrepreneur-friendly budget. We welcome the measures proposed to empower the woman entrepreneur. It is heartening to note, that, the budget incorporates many a proposal to achieve gender equality, empowering the women entrepreneur to be an equal contributor to the economy.

The Chamber commends the proposals to introduce flexible working hours and work from home concept for women which include maternity payment rebates, increasing the representation of women on board positions; SEC Rules to be amended, the ‘Enterprise Sri Lanka’ program being expanded to provide concessionary loans to young entrepreneurs, allocation of Rs. 500 million to develop the Enterprise Sri Lanka program, the proposal to introduce guidelines and regulation for the formation of child care centres and after-school and vacation under Rekawarana concessionary loan scheme and centres to encourage women in the workforce with tax rebates for enterprises that provide child care facilities.

“The successful implementation of the proposals will help increase the rate of female participation in the workforce from its present rate of 36.4% to the targeted rate of 40% by 2020,” Ranasinghe said.

Professor of Economics University of Colombo, Sirimal Abeyratne said contrary to the challenging economic backdrop of the country, the budget looks comfortable and optimistic. The growth rates of Sri Lanka have been falling. Sluggish export growth has led to increased vulnerability of the external finance and weak exchange rates. Debt bunching up remains a priority among all challenges in the current year.

In spite all these, the budget estimates show a signs of fiscal consolidation.

Fiscal consolidation has been the priority concern of the IMF Mission which concluded its EFF review, to improve the country’s debt sustainability, a few days ago. The budgetary estimates show the government’s effort aimed at fiscal consolidation, in spite of a further increase in total expenditure by Rs. 363 billion.

However, the delivery of budgetary proposals has received much attention in the recent past.

While poor implementation would improve the budgetary outcome at the end of the year; the expenditure fall short of estimated expenditure, showing statistical improvements rather than actual achievements.

Shippers’ Academy Colombo CEO Rohan Masakorala said the 2019 budget is progressive given the country’s situation and added that it is not a populist budget as expected by many. There is a certain amount of policy consistency from the previous budget.

“We commend the support provided to the export industry and particularly the rubber industry which has received Rs. 1.3 billion for re-planting and research. The focus on developing the tourism industry, encouraging entrepreneurship through credit scheme for those who have no access to funds are commendable measures in the budget,” Masakorala said, adding that what is more important is the expeditious implementation of the proposals with medium policies to stabilise the economy.

Ernst and Young in its budget booklet notes that there is no significant change proposed in the budget for corporate and individual income tax, VAT and NBT as the fiscal consolidation process has already taken place in the last two years. The significant revenue source is from the additional tax imposed on the importation of motor vehicles which amounts to approximately Rs 48 billion.

On the expenditure side, the thrust of the Government appears to be the creation of sustainable development through the ‘Gamperaliya’ and ‘Enterprise Sri Lanka’ projects. In the ever changing economic and social dynamics, there is no doubt that both business and government are facing challenging times. The continuous challenge will be to stay relevant and competitive always.

Founder Heladiv Ceylon Tea and former Tea Exporters Association of Sri Lanka President Rohan Fernando said boosting exports is the key to reduce the budget deficit. However, many policy makers do not understand this fact and take steps which are not conducive for the growth of the industry.

There are a few export industries which can be exponentially boosted in terms of foreign exchange earnings. Tea exports is one of them. There is no other export product out of Sri Lanka which has built world renowned indigenous brands available in any part of the Globe. Then why do the policy makers ignore this veritable resource to ignite the economic growth through maximum value addition taking place inside the country? Is it because the political hierarchy make lip service to few merchants with selfish interest believing them to be the successful brand builders, ignoring a multitude of successful entrepreneurs who have done far better with less noise.

He said Sri Lanka is struggling to increase the annual tea output averaging 300 million kilos for the last several years, whereas other producing countries have successfully achieved growth year on year. Kenya which was, lagging far behind Sri Lanka for many years has surpassed us and their target for 2019 is over 500 million kilograms.

“The proposal to make Sri Lanka a tea hub of the world came very close to reality three times. First, during President Rajapaksa’s rule the concept of a tea hub was included in the Mahinda Chinthana. Then during the current regime under Finance Minister Ravi Karunanayake, the concept was twice sanctioned in the annual budget proposals. Both times this was scuttled, by people with selfish interests,” Fernando said, adding that it is at the expense of Sri Lanka that the Dubai Tea hub has proliferated with global tea giants including Lipton setting up headquarters in the UAE.

At present, 19 out of the top 25 Sri Lankan tea exporting companies operate out of Dubai importing tea in bulk from Sri Lanka for value addition in that country enjoying multiple tax benefits while expanding their global reach.

He said there is a monopoly created by the suppression and restriction of other origin teas imported for re-export by vociferous agitation to stop any form of liberalisation of hub-ing in the island. This has resulted in large scale adulteration by unscrupulous tea factories using additives and encouraging banned substances for growth enhancement in the tea fields.

Pure Ceylon Tea once famous for ecologically pure quality with unique natural flavour is now being suspected for non-favourable chemical residuals. For the first time in our history, Tea shipped out of Sri Lanka is being rigorously tested by Food control authorities in Japan, Germany, Saudi Arabia and Taiwan which may trigger a domino effect in other countries importing Ceylon Tea.