A bitter brew: the issues of estate women workers 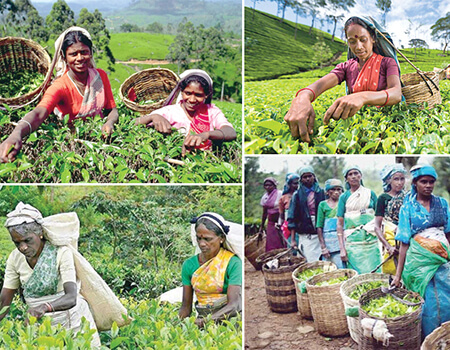 The cool climate and lush green tea plantations of the hill country is an alluring oasis of rest for all of us in the city. An invigorating cup of Ceylon Tea is the trademark of trusted quality, refined to blissful perfection over 150 years. Ceylon Tea is among the world’s best brands, a brew that resonates with original flavour. As we prepare to celebrate International Women’s Day on March 8, some women will receive awards, flowers and opulent dinners as a gesture of appreciation which is nice. What about the thousands of hard-working resilient plantation workers who work in the mist-laden hills? These women are also wives and mothers. They have needs, emotions and aspirations like all other women.

Everybody knows these robust women are the backbone of the nation’s tea industry which brings in millions of revenue in addition to enhancing tourism and creating a network of other plantation sector jobs. This labour force has worked with tremendous output for decades. Karl Marx once said, “Accumulation of wealth at one pole is at the same time accumulation of misery, agony of toil, slavery, ignorance, brutality, mental degradation, at the opposite pole.” Perhaps his words resonate with a loud silence in these hills. The women workers on the tea estates are not fully appreciated for the very significant work they do. It is a physically demanding job to carry a heavy basket and work on slippery mountainsides, with the threat of leeches and snakes. There are many instances where these poor women have been fiercely stung by hornets, and where they had to wait for a vehicle to be rushed to the hospital.

They begin their day waking up by 4 am. They do not have hot water taps or homes with carpets. They have to make their frugal breakfast which is very often some rotti. Some take this rotti for their lunch. In addition, they have to attend to their schoolgoing children, like any responsible mother. These children have to walk long distances to school. In the past, we have seen all sorts of claims that other methods to collect and carry the tender green tea leaves or ‘kolundu’ will be introduced. This is a terrible illusion.

There were other declarations that practical uniforms would be given to make these women more safe and comfortable in their work. Another illusion. Why is it that these voiceless women have been treated like this? For the record, there are a few tea companies that have initiated some good projects to enhance the welfare of these women workers which is commendable. But as a nation what have we done to empower these plantation workers?

Does the higher echelon of the tea industry subtly fear that if these women are duly empowered, especially with education, that they will lose this cheap labour force? Let’s pause for a moment. There are thousands of women engaged in tapping rubber on massive rubber tree plantations. They face some difficulties, but their living standards are much better than the exploited estate women. The massive staff cadre employed in the garment industry work hard, but with uniforms, healthy meals and modern technology. The estate women languish, and have been left behind.

The Indian poet Rabindranath Tagore said, “We gain freedom when we have paid the full price”. For more than 150 years, the women tea pluckers have paid their share by their dedicated labour. They certainly are not free in many spheres of life. To begin with, they never had a chance of a good education, especially to learn English. The ability to learn the English language is still elusive in the hill country though there are many new schools built, which is commendable.

Having studied up to around Grade 8 or 9, many young girls drop out of school. This automatically stops them from learning any other trade skills. Just like their mothers, the ‘tea basket’ is put on their shoulders and the tradition continues. They often marry within their community. Married life on these cold hills does not often glow with orange embers of love.

Apart from their hard work, these voiceless women have to endure verbal and physical abuse from their husbands. Most of these men are in fact the sons of estate women. They too have their own frustrations and broken dreams. This is another day’s article. These women have to live in uncomfortable houses, manage the finances and teach their children. In my media assignments and refreshing holidays, I have spoken to many of these shy women. Most women who are now 55–65 years have not used a mobile phone. The younger women aged between 30–45 years use a basic phone, and cannot afford a smartphone.

These women hardly come to Colombo city unless for a medical need to the Colombo General Hospital. Some of the older women aged 70–80 years have not travelled to Colombo city at all. Those who passionately and genuinely advocate for women’s rights must take note. One old woman told me they can only glance at the sky and look at a plane, but never travel in an aircraft.

Within this segment of women is a subdivision of women who have been working in big city homes as servants. In the present day, they have the refined title domestic aide, but are treated all the same. This is another day’s deliberation.

Thousands of plantation women have little of zero entertainment or social activity. They work hard and retire with no savings. They only accumulate varicose veins by years of standing and spine-related pains by carrying the heavy baskets. To those beautiful city divas who enjoy high tea, have you thought about these estate women, who are also women like you? On the one hand, we must always buy Sri Lankan and endorse Ceylon Tea, while on the other hand we all must respect and appreciate the resilient women who produce this tea. They must taste success in life. I conclude with a quote from Martin Luther King “All labour that uplifts humanity, has dignity and importance.”