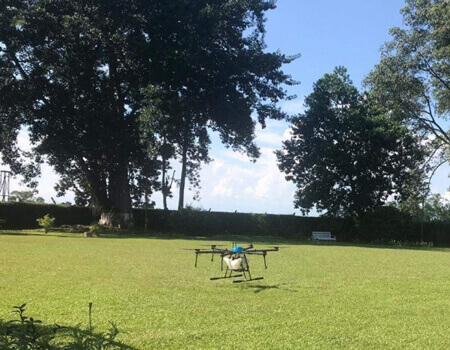 The drones will spray fertilisers and pesticides on the plants from 6-8 feet above the ground.

GUWAHATI: A Karnataka-born NRI’s company will use Artificial Intelligence (AI) to improve the quality of tea and the health of tea workers in tea-rich Assam.

BR Shetty, the founder of a number of companies based in the United Arab Emirates who recently acquired world’s first tea company “Assam Company India Limited” (ACIL), said his BRS Ventures would use robotic drones for a pilot project in Assam.

The drones will spray fertilisers and pesticides on the plants from 6-8 feet above the ground. Currently, this is done manually and as such, the workers run the risk of falling prey to tuberculosis (TB) and respiratory diseases.

“A lot of tea workers suffer from TB, cancer etc as they spray the fertilisers and pesticides. We are hopeful that by using drones, we will be able to keep them away from the diseases,” Shetty said at a programme on the sidelines of a workshop of BRS Ventures at Maijan Tea Estate in Upper Assam’s Dibrugarh district.

There is a concern about the chemical residues polluting air as fertilisers and pesticides would be sprayed from a height. However, Shetty allayed the fear saying there would be precision spraying.

According to the Plantation Labour Act, the workers, engaged in spraying fertilisers and pesticides, should be provided with “protective gears” which include gloves, masks and goggles but few tea estates adhere to the guidelines. Tea workers’ unions alleged that TB and respiratory diseases were very common among tea workers and they killed many workers over the years.

The BRS Ventures will use two kinds of robotic drones. Their application is expected to reduce the wastage of fertilisers and improve the quality of tea. One set of drones will scientifically analyse the health of plants, soil conditions and other natural factors while the other will spray fertilisers and target pests.

The company also has plans to implant molecular markers in leaves to develop traits for mass production.

“We have the technology to implant molecular or genetic markers in plants but tea is a new area for us,” said Avital Tractitman, an executive of Israeli SMX, who is attending the seven-day workshop.

The markers help manage a plant’s genes by augmenting resistance to pests and improving the quality and quantity of production.

Shetty, who was born in Udupi, assured that the use of technology would not lead to retrenchment.

“None of our 26,000 farmers will lose his or her job. We will engage them in different areas,” he said.

He used the phrase, “We are here to cooperate” several times in his speech and preferred to call the employees farmers to workers.

For technological assistance, the BRS Ventures has tied up with several companies from the US, Australia, Scotland, Israel etc.

“We worked on similar projects in Asia and the use of AI improved the quality of lives of the workers and increased production,” Nataraj Balasubramanian of the US-based Smart Farms said.