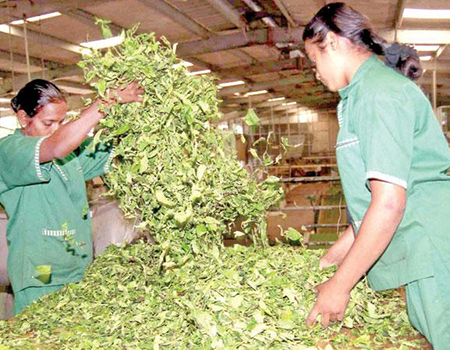 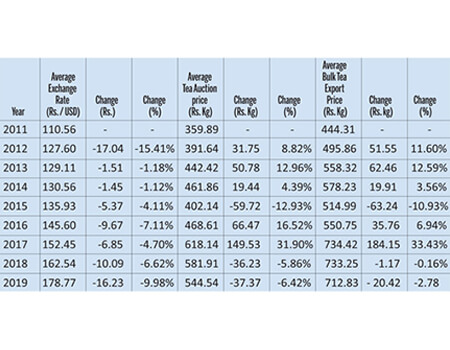 The value of a currency depends on a number of factors that affect the economy of a country such as the balance of payment, government debt, foreign exchange reserves, foreign investment, trade deficit, economic growth rate, inflation, macro-economic policies and other relevant factors. The general belief is that, a strong currency would make imports cheaper and exports uncompetitive while a weak currency could make imports expensive and exports more competitive, a media release from the Tea Exporters Association said.

The price of an export commodity such as tea is influenced by both internal and external factors which would include quality and uniqueness of the product, world supply and demand, the value of currencies of importing countries, tariff and non tariff barriers among others. According to the principles of economics, the short supply of a product could move the prices up and an excess of supply would lead to a lowering of the prices if all other factors remain constant. Since over 90 per cent of the Sri Lankan tea production is meant for exports and the price of tea at the Colombo Tea Auction is also subject to the influence of a number of external factors in addition to the domestic issues of tea quality, standards and several other factors.

When the value of the currency of an importing country depreciates it will have a negative impact on the purchasing power of the buyer / consumer and hence the importer may not be able to pay the same price as before or could reduce the volume of purchase depending on the necessity of the product to the end consumer.

When the supply is more than the demand the buyers have more options to choose and the possibility of moving from high cost suppliers to low cost suppliers is greater unless a producing country offers a unique product that cannot be matched by others.

The tariff and non tariff barrier issues will also have an impact on the demand and the price of an exportable commodity irrespective of the exchange rate movements. The recent MRL issue that affected Sri Lanka tea exports to Japan, Germany and Taiwan is a good example of non tariff barriers that negatively affected the demand and prices of Ceylon Tea. In a highly competitive market, the quality of the product also plays a vital role in maintaining prices as better quality products can fetch good prices. The international sanctions on Iran, civil war in Libya and Syria are some other issues that influence tea prices.

This article is to examine how the movement of the Sri Lanka rupee in the recent past has influenced the average tea auction prices and the average FOB prices of bulk tea. It does not examine whether Sri Lanka has gained or lost any markets due to the exchange rate fluctuation.

Theoretically, the depreciation of the rupee should have positively impacted on the Colombo Tea Auction prices at the same or a similar ratio of the depreciation. However, in realty this theory has not worked in the same manner due to the influence of the above mentioned internal and external factors.

The Movement of the Rupee - an analysis of the movement of the Sri Lankan rupee from 2011 – 2019 period reveals that the local currency has continuously depreciated against the US dollar during the last eight years. From point to point, the average value of the rupee depreciated from Rs. 110.56 in 2011 to Rs. 178.77 per dollar in 2019 registering depreciation of Rs. 68.21 or by 55.73 percent to the dollar.

However, an in depth analysis of the movement of average tea auction prices and average FOB prices of bulk tea against the movement of value of the local currency on an annual basis from 2012 to 2019 shows a somewhat different picture as the influence of both internal and external factors are captured in the annual prices. (See table)

In 2015, the rupee depreciated by 4.11 percent over 2014 and contrary to the general belief that depreciation makes the price of tea more attractive to the buyers, the average tea auction prices came down by 12.93 percent and the average FOB price of bulk tea also came down by 10.93 per cent.

It is observed that a large portion of increase in the auction price of tea was born by the exporter as they were unable to pass the price increase over to foreign buyers. In 2017, the rupee depreciated by 4.70 per cent over 2016 but the average tea auction price went up by 31.90 per cent while average FOB price of bulk tea too went up by 33.43 per cent.

The general acceptance that, depreciation would make local tea products more competitive was proven wrong in 2018 and 2019 when average tea prices failed to gain despite the depreciation of the local currency.

In 2018, the rupee depreciated by 6.62 per cent and further depreciation of 9.98 percent was registered in 2019. Despite the depreciation of local currency the average prices at the Colombo Tea Auction came down by 5.86 per cent and 6.42 per cent respectively in 2018 and 2019 due to sluggish demand from foreign buyers with an over supply of tea in the world market.

However, the average FOB prices of bulk tea exports in the two years came down by 0.16 per cent and 2.78 per cent only. It appears that, there is no strong co-relation between the depreciation of the local currency and the price of tea as the price is always influenced by a number of internal and external factors.

It is also evident that the average FOB prices of bulk tea behave differently to the movement of tea auction prices due to the addition of export taxes, blending cost, export packing and different trading terms used by the exporters.

A review of the movement of exchange rates of top twelve buyers of Ceylon Tea during the last six years has revealed that except the value of the Euro and the UAE dirham, all the other currencies have depreciated against the US Dollar.

Over 50 percent of the average depreciation of currency is recorded from Iran, Turkey, Russia, Syria and Azerbaijan while China and Chile have registered depreciations of their currencies by more than 10 per cent during 2014–2019 period.

Since Iran tea buyers use the open market rate of the dollar for tea imports, the fluctuation of the Iranian rial is more than the depreciation of the official rate by 62.3 per cent.

Although the UAE currency remains unchanged it did not help the Colombo tea auction prices as its imports from Sri Lanka reduced during the last five years as a result of lower demand from her major re-export markets such as Iran, Iraq, and CIS.

Since the export of Ceylon Tea to EU markets accounts for less than 10 per cent of the total tea export volume of Sri Lanka, the stable euro also failed to make a significant impact on the tea prices.

It is observed that, the buying power of major importing countries of Ceylon Tea has significantly reduced in the last six year period and that may have negated the benefit of depreciation of the local currency to the local tea trade.

However, Sri Lanka has experienced a setback with her black tea production coming down from 334,837 MT to 301,405 MT during the same period registering a decline of 9.9 per cent.

The international tea committee statistics reveal that world tea exports reached 1.469 million MT in 2018 against the volume of 1.484 million MT in 2014 registering a marginal decline of 1.01 per cent in the last five years while Sri Lanka black tea exports declined by almost 15.2 per cent during the same period. In terms of volume, Sri Lanka has lost 47 million kg of tea of its exports during the same period.

Since the global black tea production has gone up by a significant volume and exports have come down by only 1 per cent in the last five years, the foreign buyers who were patronising Sri Lanka could have moved to other destinations for procurement of their black tea requirements which could have also negatively impacted on the tea prices at the Colombo Auction despite the depreciation of the local currency.

The recent World Bank Commodity Outlook Report has stated that, the global tea prices declined by 1 per cent in the 3rd quarter of 2019 against the previous quarters and remained 6 per cent below the same period in 2018. The tea prices at auction centres in India and Kenya also came down in 2019 due to excess supply situation in the world market especially the CTC tea varieties.

The EU and US sanctions imposed on Russia since 2014, tightening of USA financial sanctions on Iran in May 2018, civil war in Libya, Syria, Iraq and other factors, the MRL issue with Japan, EU and Taiwan and the failure to maintain the tea quality standards could have also affected the tea prices at the Colombo Auction in the recent past. When there is huge competition in the world tea market, the depreciation of the local currency alone cannot push the tea prices up.

Although the averages may not show the complete picture of tea price variances in relation to exchange rate fluctuations it is evident that there is no single factor responsible for the movement of prices of agricultural commodities including tea, but rather a set of factors.

The general beliefs that, the depreciation of local currency will always lead to the enhancement of the prices of tea or export commodities is subject to fulfillment of various internal and external factors.

Since external factors are beyond the control of Sri Lanka tea trade members what is necessary is to address the domestic issues affecting the tea prices. A consorted effort by all stakeholders is necessary to overcome the domestic issues to attract more foreign buyers towards Ceylon Tea. Sri Lanka’s position as the leading supplier of orthodox tea to the world market is challenged by other countries due to the decline in tea production volume and the standard of tea.

Unless these issues are addressed immediately the country may not be able to command higher prices for its tea. Finding new markets and development of more strong Sri Lanka tea brands could be the long term solution to enhance the tea prices at Colombo Tea Auction.