Across China: Foreign commodities a hit in southwest China 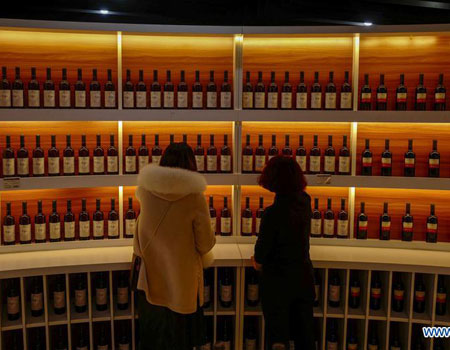 In Chongqing Municipality, a bonded trading center about 10 km from the city center has attracted countless individual and group customers hoping to buy the coveted but cheap foreign commodities transported to China by freight trains, water and air.

Chongqing is a city located in China's western inland and is neighbor to China's vast western areas, which account for about 70 percent of the country's land and produce about one-fifth of China's GDP.

The city is also connected to the eastern seaboard thanks to the Yangtze, China's longest river, making it a transfer hub for commodities from the western areas to be sold across the world and for goods from around the globe to reach China's far west.

The Belt and Road Initiative has allowed logistics to boom in Chongqing, making transportation much better due to the rising number of China-Europe freight trains. The first such train was launched between Chongqing and Germany's Duisburg. Such trains helped slash travel time by two-thirds compared with water transport and are much cheaper than transporting by air.

According to official figures, by March 25 this year, a total of 3,322 freight train journeys had been made between Chongqing and Europe. The number has been rising in recent years.

Water and air transportation is also much more convenient as authorities launch more routes to link China's west and the world.

In the bonded trading center, there are 15 stores selling specialties from countries and regions around the world.

Yu Di sells Sri Lankan Ceylon tea in the center. Yu's shop opened in January this year, and has raked in a revenue of more than 100,000 yuan (14,890 U.S. dollars) in the first quarter alone. The imported tea has been sold to multiple provinces in southwest China, and "retail sales have been great," he said.

"I bought some Sri Lankan tea at the China International Import Expo in Shanghai last year, and I was fascinated," Yu said. "Then I decided to do business in the tea sector."

But just ambition is far from enough. Easier logistics truly helped power Yu's business. In 2017, an international land-sea trade corridor was launched thanks to cooperation between China and Singapore. The project allowed goods to go out and come into China via the shorter southern route, slashing transport time.

Yu's tea leaves come all the way from Sri Lanka to Qinzhou, a port city in south China's Guangxi Zhuang Autonomous Region, before going to Chongqing via freight trains. In this way, costs are lowered by about a third, or even more, giving more profits for business people like Yu.

So far, a variety of exotic commodities have flooded Chongqing, drawing much business and attention.

Yu plans to go to Sri Lanka in May this year to see if he can expand his business by importing more, different commodities

"I believe in the future," he said. "Business will definitely get better here in Chongqing."